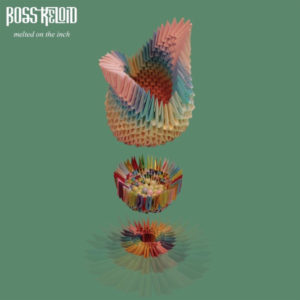 Boss Keloid are a scary bunch. They’re one part art rock, two parts progressive metal, three parts sludge and seven parts obsessed with ‘Zodiac’ era Melvins. On their 2018 LP ‘Melted On The Inch’ they use those influences and their many quirks to challenge, frustrate and eventually entertain. Providing your mood is right – and this is the very definition of a mood record – it can lead to a fascinating trip.

The album hardly wastes any time in immersing the listener into their bizzaro universe of heavy riffs, since the opening number and lead single ‘Chronosiam’ starts this musical journey with a slow and intense bone shaker that really shows intent. Downtuned to oblivion, the guitars are loaded with bottom end which in turn makes the bass even deeper; as they crank their slow and heavy sounds, it’s almost possible to feel yourself being sucked in to their musical void. Far beyond your average sludge metal workout though, these heavy and slow moments are eventually balanced by off-centre rhythms and something chuggier. With the addition of a scattered, growling vocal delivering a selection of random phrases and non sequiturs, a strong Melvins influence really shines through, right down to frontman Alex Hurst tapping into a style that’s closer to Buzz Osborne than any other band have ever managed. Despite these metal-based tropes being good enough to fill the seven minutes in hand, Boss Keloid aren’t about to rest on their laurels; there are other moods to explore…and they also throw in elements of a more experimental art rock style from the 70s – complete with tinkly bell-like percussion – and an intense riff and vocal line that sounds like the fanfare for a medieval battle because, y’know, they can. If that’s not enough, a few quieter links drop into more familiar Tool-like territory, while others use clangy off-kilter guitars that are half a world away from the booming riffs and perhaps closer to the jarring sounds favoured by Primus man Larry Lalond. It’s an impressive opener, for sure. It’s also one that’ll send the less adventurous listener running for the hills.

In a shift from the opener, ‘Tarku Shavel’ starts relatively gently, throwing out something very 70s influenced, complete with a vocal melody that has more in common with something from Van Der Graaf Generator, Procol Harum and arty seventies rock than anything more contemporary. Any comparisons are based on basic melody rather than actual performance, of course, and Hurst croons with a real force that has a connection with other Boss Keloid material. Soon enough, though, the heavy riffs take over and there are vague comparisons with Awooga and Crowbar to be found, but once the Keloid manage to steer the more traditional sludge into more progressive climes the second half of this track provides some of the album’s most interesting music. With the sludge metal complimented by rhythmic clanging, bits and pieces of this arrangement veer towards world music and finally a hugely melodic wordless vocal. As before, they somehow elevate the music to become more than the sum of its parts and influences. If it were not obvious before, it’s here you’ll start to realise that so much of the arrangement is upon the shoulders of Ste Arands – a man with the unenviable task of providing both power and subtlety within a short-ish time-frame. Now your ears should have had time to adjust to the Boss Keloid sound, there’s a feeling things are about to get better…and they do. If, of course, by this point, you’re feeling worn down, the remaining material is unlikely to win you over.

Pushing further into a world of crossover sounds, the album’s highlight ‘Peykruve’ mixes jazz fusion, sludge bass and reggae influences during a very complex intro. The inevitable heavy and sludgy parts will please those who came looking for riffs, especially since the sludge is anchored by a slow and steady rhythm, but it’s when moving away from those insanely heavy riffs that Boss Keloid are at their most interesting. A true melting pot, this track includes dark organ swirls (sounding as if they’re on loan from Egg/Arzachel man Dave Stewart) and complex rhythms that fuse hard rock with jazz in a very retro manner. The push and pull between the dark and the light – or in this case, the dark and darker still – shows BK’s true heart and willingness to experiment/confound. It’s a twisted musical world they inhabit, but it is utterly unafraid. Whether you should be unafraid by their intensity is a different matter. In yet another change of mood (at least to begin with), ‘Jromalih’ opens with percussive elements that are reminiscent of Tuatara, before descending into a world of prog rock and jazz fusion notes that centre around Paul Swarbrick’s circular riff. With more space in the overall sound, those dark keyboards are allowed to rise and during the main hook the droning sounds really compliment the bluesy tinge of the vocals. Those bluesier sounds could have made a superb track on their own merits if left to grow, but as always there’s a good dose of doom metal along the way and Alex and Paul crank out a truly dense head-nodder to flesh out this epic. In terms of heaviness versus complexity, this is one of Boss Keloid’s finer tracks, but in terms of overall long term enjoyment, ‘Peykruve’ has the edge.

At this point, you might wonder if the band are on the verge of burnout. The last thing you’ll be expecting is a shift into funk, but that’s the over-riding feel of ‘Lokkanok’s beginnings. Bassist Charlie Seisay takes a moment to drop into something with a bit more groove and with a selection of choppy chords and retro keyboards courtesy of Matthew Milne, the rest of the band follow dutifully. Soon enough, though, it’s clear that this is not so much a jam by a five headed funk beast as a quick nod to Deep Purple’s ‘Stormbringer’ LP, before settling into a sludgy world of riffs. The ensuing heaviness allows Alex to belt out his lungs, subsequently sounding like a particularly wronged Nordic invader. A few of his vocals drop into Melvins-esque phrasing – a handy reminder of the album’s earlier material – and eventually he ends up screaming, but where else to go after starting so intensely? Into abrupt silence, of course. Finally, ‘Griffonbrass’ introduces acoustic guitar, and simple chords are placed over a drone and played long enough to create a lull before a heavy riff crashes in with a genuine jolt, thus frightening the listener. The resultant riff and vocal combo is unavoidably Melvins derived once more, but eventually incorporates off-kilter time signatures and enough twists to keep everything interesting. Gang vocals enforce the growing sense of intensity and by the time Boss Keloid’s wall of sound is in full effect, it’s knocked down by jazzy noodlings and keys that pull everything back to a world of 70s fusion. In many ways this track ends the album with one of its more linear workouts, but the choice of riff and vocal makes everything feel as if it has come full circle.

In a world where progressive is still used tag things that sound like 70s Genesis, classic Pink Floyd and not much else, while progressive metal all too often sounds like a Dream Theater rip off (why…just why?) or some Tool wannabes, it’s refreshing to hear something really pushing the envelope. ‘Melted On The Inch’ is sassy, scary and superb in equal measure. Sounding like an experiment where Robert Fripp acts as musical mentor for the Melvins, it’s not a record for the weak willed or the impatient, but it’s an album that positively burns with ambition.