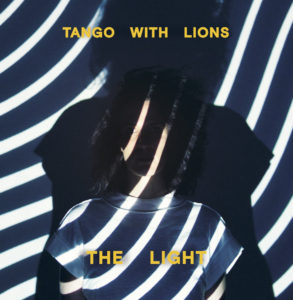 After a five year recording break, ‘The Light’ marks the return of one of Greece’s most popular English speaking bands, Tango With Lions. With core sounds rooted within the early mid 90s, Tango With Lions are keeping the flame of European dreampop alive…or so it would seem if you were to only listen to the first few tracks of this 2018 comeback disc. ‘The Light’ presents lots of floaty, dreamy alternative sounds – ’tis true – but it ploughs deeper into bits of alt-folk than most dreampop acts would consider, or even dare.

This is one of those albums that instantly gives a feeling that it’ll be interesting, right from the very first notes. ‘Back To One’ allows a repeated acoustic guitar refrain to set a rhythm, while tinkling keys and haunting brass sounds fill space. The beginnings of this track – and a fair amount of the basic music that follows – leans towards classic dreampop, blending indie-ish sounds with the other-worldly. So far, so good, then; it’s really down to whether the vocal style is sympathetic to the almost ambient sounds…and when Katerina Papachristou makes her entrance, a final sigh of relief can be breathed. Her voice is quiet, but almost husky, buried quite deep in a swelling arrangement. By the time the end of the first verse is reached, there’s something about Tango With Lions’ music that’s both endearing and so familiar. The acoustic guitar still busies away, but by now it’s the drums that really impress, with a huge rolling quality punctuated by huge kettle drum sounds. Katerina, meanwhile, offers a narrative of exploration and travel, something that really reinforces the idea that this neo-cinematic track is constantly on the move, albeit quite slowly.

‘Proof of Desire’ changes the mood, losing some of the other worldly wooziness and choosing instead to explore a world of mopey slowcore, dropping in elements of American Music Club and Mike Johnson’s work along the way. It may be minimalist, but it’s never boring; the way a quiet lead vocal meets with a hard and slow acoustic riff is all that’s needed to make this great, if that’s your bag – at least for a time. The magic really happens during the coda, though, when a solid drum part and something that sounds like a theramin both push forth to help create an atmospheric layer of proggy rock that’s straight from the school of King Black Acid. There’s not really an opportunity to experience Kat’s light tones against such a weighty backdrop and any pseudo-heaviness is short lived, but it’s enough to add evidence to any ideas that there’s a superb record taking shape.

After a couple of songs to warm up, the next run of tracks provides every reason to check out ‘The Light’. ‘Last Thrill’ shifts the mood yet again, allowing handclaps and a dancing bass to lead against a brilliant dreamy vocal. Occasional brass parps feel a touch heavy handed, but all things considered, this tip of the hat to The Sundays is breezy and almost catchy in it’s own way. The title track, meanwhile, opts for something more contemporary at the time of it’s creation. There’s a woozy pace that still fits with the dreampop core and the combination of warming bass, as slow beats and echo drenched guitars work magic along similar lines to the lighter end of the much missed Elastic Sleep jamming with a prog band. This is a number that’s warm and instantly loveable – an ideal companion for late night listening and the feeling that Kat’s endearing vocals carry a pinch of Lisa Hannigan in their playfulness is very much a plus. Delving further into twee pop, the opening of ‘Phoenicia’ clings on to the previous vocal style, but combines it with tinkly sounds that have the effect of making it seem almost disposable. By the time the drums arrive, though, the track really finds its feet. Again, there’s more than a trace of Hannigan at work and some superb music builds and moves along in a way that somehow manages to convey a feeling of urgency through pace while still lurking amid a hazy, woozy malaise.

For those more into the folky elements that occasionally poke above these trippy blankets of sound, the banjo-led ‘Restless Man’ will certainly appeal. A jaunty approach to the music – here, hugely in debt to modern folk and Americana as practised by Emily Haines and Worry Dolls – bounces merrily, while Kat in turn finally allows her voice to be heard at full volume. In terms of Americana, it doesn’t push boundaries (unless you count its Greek origins), but it’s a well constructed tune that allows most of the band to individually shine. …And, let’s be honest here: the opening of the album suggested it would be an interesting journey, but there was nothing to suggest it would include the marriage of banjo and muted trumpet. ‘What You’ve Become’ shows yet another side of the Lions, mixing a midpace with some great fuzzy electric guitars and a choppy acoustic. There’s no temptation to be flashy, but a great production job and tastefully used distortion recalls a lot of great 90s sounds and ‘The Go-Betweens’ returns to the sparse slowcore, semi-acoustic moodiness, very much suggesting that although Tango With Lions delight in throwing musical curve balls, the world of early solo Mark Lanegan (circa ‘Whisky For The Holy Ghost’) and Mike Johnson’s ‘Year of Mondays’ are constant musical touchstones.

The closing number, ‘L’Ombre’ might sound odd and detached if heard in isolation, as a heavily treated French vocal and accordion do their best to unnerve against fractured beats and electronic treatments. As part of the whole package, however, it’s very interesting. Somewhere within the spacious drones and clicks, you’ll find a melody that might inform a modern prog band’s experiments, or perhaps a homespun recording of an anti-folk hero being especially obtuse. The way it appears from nowhere and then sucks the listener into a world of semi-repetitive ambient elements seems like a natural way to end this album. It’s a testament to the band’s talents that this feels like a suitable end as opposed to filler; it’s clear that they were banking on this half an hour being used to charm and seduce, so that by the end, you’re completely open to whatever these Lions offer next. Interesting…

‘The Light’ is not necessarily the kind of record you’d play every day, and really not one you’d pick if you want something uplifting, but it’s great. For fans of various twee pop acts, as well as light indie dreampop along the lines of The Sundays and Drugstore. Tango With Lions should bring more than a glimmer of shimmery enjoyment. For those looking for folk roots within less traditional settings, ‘The Light’ will certainly intrigue, if not thrill in its self-made cocoon of understatement. For their fans, it surely marks a welcome return, while for others – mostly those listeners outside Greece – it is a superb introduction to a band who deserve more of a global ear. Grab this record at the earliest opportunity.