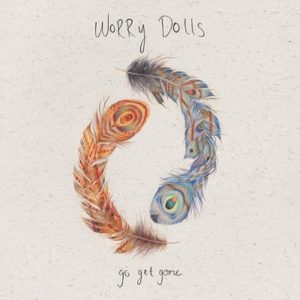 In ten almost perfectly crafted songs, the former students from Liverpool dig deep into their hearts and present a selection of tracks that sound almost wholly American. The fact that they left the UK to record the material in Nashville with a few known faces is a big help, of course, but don’t expect smoothness and shiny qualities to always win out. Although one track can be considered Worry Dolls’ most commercial, even with the assistance of song smith Ben Glover (known for his work with Gretchen Peters) and producer Nielsen Hubbard, these bulk of these songs show Worry Dolls every bit as committed to their previous sounds and very rootsy influences.

Armed with a finger picked acoustic guitar and omnipresent harmonies, ‘Endless Road’ begins the album by thrusting the vocal talents of the duo into the ears of prospective listeners, doing so in such a way their natural talents seem unavoidable. This paired down musical approach alone would have made a great opener, but the introduction of a warm bass contrasted with banjo brings more wonder. While no new ground is broken for folk or country music, when things sound as good as they do here, it’s hard not to fall for its old style charm. “I don’t know where I’ll be, but you know how to find me” opine the voices somewhere on the titular endless road, restless spirits both, introducing a recurring theme of travel that’s perfect for the two displaced Brits. Miles from their own roots, however, they thrive: “where I am is where I’ll call home”. In many ways, this is the most perfect Worry Dolls recording and completely sets the tone for the rest of the album. More of a travelling bug informs ‘Train’s Leaving’, a bluegrass-y stomper that pitches a great vocal against a selection of banjos, mandolins, a superbly understated harmonica and a steel guitar (well, they did record in Nashville). Given that the song appears to be about moving on (“this train’s leaving with or without you”), there’s a great optimism rising above any fear of the unknown, but most of that optimism comes from Nicol and Jones and the thrill they so obviously get from singing together.

After an upbeat pairing to ease into the album, ‘Miss You Already’ wastes no time in bringing down the mood, tugging at the emotions and evoking images of a half empty bar filled with broken hearted drifters. Moving farther from the folk and Appalacian sounds, this number is old style country and unapologetically so, at that. The acoustic guitar weaves a simple waltz, which accompanied by a soft plucked banjo allows the vocal harmonies to take priority. Addition of a steel guitar mid-way only reinforces the old country heart…and if you like this kind of thing, it’s fine; if older country isn’t your bag, it’s likely to be a skipper after a couple of listens. Fear not, though, as another stand out number, ‘Don’t Waste Your Heart’, follows soon enough – and it couldn’t be any more of a contrast. For this number, the Dolls settle upon a bassy boom and wandering fiddle for the meat of the track, creating a mean and moody backdrop that sort of sounds like a more country Chris Isaak. Set atop such a bleak musical style, Zoe and Rosie’s voices sound ever more appealing – in terms of roots music, this seems both oddly familiar, yet at the same time, sees the women really pushing their own sound. Repeated listens only confirm how good this is.

Delving ever further into their world of Americana, ‘Passport’ goes all out in the stripped back stakes at first, presenting a crying lead voice against a sparse banjo. It’s one of those numbers where the voices are all important, always calling out to draw in the listener, with Zoe and Rosie singing against a plucked sound at first, but eventually growing into a dark and wandering tune with a deep beat and soaring string sounds. ‘Light Oh Light’ sounds like a marriage of a tried and tested Worry Dolls musical style and the pace of Dire Straits’ ‘Calling Elvis’ (Mark Knopfler loves country music, of course) leaving three minutes of solid roots groove in its wake, on a tune that sounds best with the volume cranked. In fact, he interplay between the strings, the banjo and a haunting steel might just result in some of this record’s best music, while ‘Someday Soon’ sets itself up as a modern singer-songwriter workout before doing an about turn into more finger picked bluegrass. Like ‘Train’s Leaving’, the music has a constant feeling of movement, while the blending of the voices contrasts with a still and almost ethereal presence. Both these numbers are very different to each other and yet both seem to evoke the very essence of the band. Lead single ‘Bless Your Heart’ comes across as a touch more commercial, placing an almost pop hook among the expected bluegrass bits. It gives the album another change of mood without sounding too forced. The harmonies are great and the hook is one of the album’s more immediate. It might lighten the overall sound a smidgeon, but in no way should be considered a betrayal of Worry Dolls’ roots; imagine a country band reworking an old KT Tunstall number and you’ll have a reasonable idea of what to expect. If the slightly more commercial style reels in some new ears, their work is done.

Those who’ve followed Worry Dolls’ career thus far will love ‘Go Get Gone’. In ten songs and a pleasingly old fashioned thirty-something minutes, the very British duo show a love for some distinctly un-British sounds…and come up with material that could rival many a Transatlantic country and folk act in the process. For anyone with the merest interest in rootsy country/folk music, this album is a must hear.