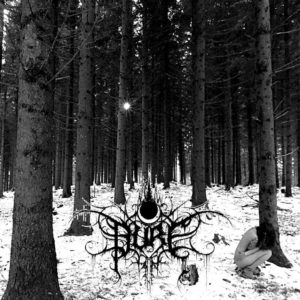 Over the years, bands have taken the roots of black metal and fused it with other metal-based ingredients to create interest, but such experiments are largely of no interest to Pure: for the bulk of this album’s thirty seven minutes, they’re intent on taking the listener to the very edge of intensity. Even the opening track is spared of an intro; there’s nothing to acclimatise the ears, as ‘Anonyme et sens Visage’ kicks off with a loud, sheet metal blast of sound…a noise which, unless preventative measures are taken, could damage your speakers. Following several bars of similarly insane noise – like hearing Lou Reed’s ‘Metal Machine Music’ played back on four stereos at the same time – under which a second guitar valiantly tries to make a more melodious counterpoint heard, the band breaks into a pneumatic section that judders and thrashes like Bast jamming with Zeit. The vocals come across with a predictable rasp and husk; in essence, it’s all very trad black metal, but turned up to eleven. This continues for the bulk of the track until a small attempt is made to slow things down: it doesn’t become more melodic – no chance of that here – but a slight droning quality briefly suggests that this does have layers, and possibly plenty of them, but those textures are so compressed, it’s hard to focus in the long term.

Perhaps the lack of space within this recording has much to do with the way it’s created. Guitarist Bornyhake dominates everything, his amps cranked to such extremes that he even makes the drums hard to hear at times. Meanwhile, vocalist Bornyhake pushes his voice so hard, it’s almost like being party to a battle of wills…which gives the bassist (Bornyhake) little chance to stretch out. With all of that in mind, this one man show seems absolutely intent on creating the most extreme sound ever. The beginning of ‘Je Tuerais le Monde Pour Le Lumiere’ offers very brief respite by making a feature of an unaccompanied jangling guitar at the outset and a slower pace all round, but it isn’t long before the weight and sheer bluster of this piece becomes challenging. After a couple of minutes, the slower sounds give way to a full scale sheet of black metal with the vocals bleeding through. They’re all in French, but since the voice is used in the best black metal tradition of “extra instrumentation”, non-French speakers probably won’t feel sidelined. A number that gradually increases in heaviness across it’s eight minutes, this starts as heavy as early Paradise Lost, spends the bulk of the time ploughing the depths of the most pneumatic blackness and eventually ends up sounding like a classic thrash LP played at 45. Only a brief return to the intro breaks the general assault, but by that point, its a melody that sounds and feels somewhat like a red herring.

The middle of the album – and essentially, the meat of the record – comes from a pair of lengthy workouts primarily concerned with death. ‘Le Silence Mortel’ features one of the most intrusive black metal vocal performances ever, as Bonyhake takes most of the words on a near-individual basis and stretches them to almost a bar apiece, much in the way you’d expect from a gothic or doom outfit. The odd thing is, it sort of works. It’s really difficult to listen to (especially against a wall of jarring and thrashing guitar sounds), but always seems suitably confrontational. The couple of slower riffs within this frankly insane seven minutes hints at more to come…but it never does, leading to a rather claustrophobic experience. On the flipside, the intro to ‘Le Jour Ou Je Suis Mort’ actually sounds like a different band, throwing out a heavy but melodic groove, the basis of which could’ve come from an old Paradise Lost or Celtic Frost long player. There’s then a spooky and spacious moment where minimalist notes set up tension, as if to suggest you’ll have no idea what’s around the corner. …But, of course, you know exactly what’s coming by now and the sheet metal sounds and blisteringly fast riffs merely recycle earlier efforts. It’s done well – presuming that’s what you’re into – but there’s always a feeling that a bit of space would have helped no end. The two styles alternate for the duration and while, in some ways, the slower passages make this one of the album’s better offerings, the guitar tones are invariably headache inducing.

The title cut keeps up the confronting style by ploughing through almost six minutes worth of pure blackness, not even changing tempo for the most part. As instrumentals go, it’s far too straight, there’s just no variation on a theme. It’s obvious Bonyhake can play a variety of instruments, but this values extreme heaviness and sheer speed over musical intricacy. Maybe if he had bandmates with which he could jam out ideas and play against, this would have worked out…but then again, maybe not. By way of a coda, ‘Solitude’ revisits the cold guitar sounds introduced on ‘Je Tuerais Le Monde…’ before giving up and tailing off into a world of feedback. It was to be expected, but it leaves the album hanging, with the listener potentially feeling emotionally cranked and drained at the same time.

As mentioned, there are a lot of bands happy to mix their black metal influences with doom and other metal subgenres (the Zeit release from 2017 being one of the finest examples of this; it may even be one of the finest black metal records ever), but ‘J’aurais Du’ is pure in almost every sense of the word. It’s ugly; it’s devastating and it could tear a hole through your face from five hundred yards. This is a recording to be approached by only the very brave: while it shows amazing commitment from an extreme metal one man band, the results are of interest to black metal purists only.