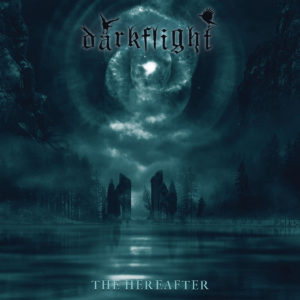 With a funereal pace, ‘Crushed’ sets out on a musical journey that’s heavy and ploddy, but ultimately very melodic for the chosen style. A cold lead guitar lays down a distinctive and very gothy riff, while underneath, heavier rhythm guitars add plenty of chug and sludge. At first, this appears to be a fairly straight doom and black metal hybrid, especially once Ivo Iliev compliments his hard guitar sounds with an abrasive husk of a voice. It’s worth persevering, though, as once those voices subside, guest vocalist Steve Cannon steps to the mic and the influences from the earliest My Dying Bride are more than evident. The combination of dark sounds and forcible croon mightn’t be anything new in the world of doom, but there’s a feeling that Darkflight have been somewhat overlooked with regard to their previous contributions. Within this epic nine minute opener, the audience are not broken in gently, especially as the two men blend doom with huge slabs of black metal vocal; by the three and a half minute mark, everything is in full flow, like a howl of rage set against haunting guitar lines. The instrumental sections are terrific, with a simple riff multi-tracked and then set off on an almost cinematic path, while slabs of dark keyboard work fill gaps and make everything sound denser still. Such is the attention to detail – even taking the slow and heavy vibes firmly into account – that nothing within this long number ever feels dragged out.

‘Expiring Soul’ at first teases with lightness, as blankets of keyboards approximate the sounds of Within Temptation and their ilk. Soon enough, a pounding riff destroys the melody, in turn creating a new one of its own. As before, the way Darkflight place very 80s twin leads over the harshest funeral doom sounds is impressive. In many ways, it’s a pity these sounds have to be masked by a black metal voice, but looking towards the positive, the way Iliev howls, you’d think he’d been genuinely wronged and his world had fallen apart. The inevitable instrumental sections are really where it’s at, though: the use of a circular riff that sounds like an old Iron Maiden piece slowed down for a Paradise Lost devotee brings much to the table; Darkflight obviously understand that, quite often, doing something very well is actually more effective than striving to push boundaries. Harsh vocals aside, much like the opener, there’s a great deal for fans of traditional and doom metal sounds to enjoy.

The bleak ‘Giving Up’ opens with one of the album’s most enduring melodies, laying out a hybrid of Sabbath, Cathedral and the more epic qualities of The Howling Void. The way the multi-tracked guitars are used to weave an almost folk metal melody catches the ear instantly. Anyone fearing that this melodic shift will be too fleeting can rest easy, since this presents another opportunity for some clean vocal to take the helm. Applying a similar melody to the chosen riff, there’s more than a little something in Cannon’s voice that’s inspired by the wobblier aspects of Geoff Tate, even if the music is more late Cathedral than Queensryche. For the chorus, Iliev’s black husk of a voice returns but the huge presence of soaring guitar sounds always keeps one ear on something more melodic. Eventually introducing a chugging downstroke to the riff, the band teases with something heavier still, but nothing ever topples the soaring lead from the heights it’s reached over the past few minutes. Already the album’s absolute highlight, this number then takes a sharp turn into depressive string sounds and more pagan folk influences – complete with spoken eulogy – before the lead guitars return for a second round of slowly cranked 80s melodicism while Iliev wrenches his gust out, sounding like a man who has lost everything and everyone he’s ever loved. Obviously, you’ll never decipher his pain without a lyric sheet, but that’s hardly the point. Looking at this ten minute workout as a whole, it’s got almost everything. If you think you might like Darkflight but are unsure where to start listening, this is perfect.

The album’s second half doesn’t quite reach expectations at first, since ‘The Outpost’ merely recycles the heaviest parts of what’s gone before, with less impressive results. This doesn’t make it a bad track in isolation – it’s got power, riffs and a solid presence all round – but it has the misfortune of being sandwiched between two of ‘The Hereafter’s most impressive offerings. ‘Giving Up’ was always an impossible act to follow and, if anything, the quiet and mildly disturbing ‘Sans Ame’ sounds like a post-script to that track, presenting synthesised strings in mournful mode and a whispered voice, again, sounding as if the protagonist is sat at a graveside recounting memories and days with a loved one he’ll never see again. In some ways, the first half of this track acts as an extended interlude – and time to emotionally regroup – before the second movement ushers in slow and heavy doom riffs. Stretching to an impressive thirteen minutes, this never rushes: the drums lay down a funeral pace; the guitars revert to their much-loved haunting and soaring sounds and eventually black husks take over the main vocal stance. In funeral doom terms, this is thoughtful and yet so, so devastating – in many ways it’s the pinnacle of everything Darkflight have worked towards over the previous seventeen years.

That would have been the perfect closer, but ‘Threshold of Death’ wisely leaves the listener with memories of something more tuneful. Dispensing with all heaviness at first, the music takes on the guise of a nineties indie-goth act, with touches of shoegaze mopiness. By the time the heavy guitars make a late entrance, the original root of the music is never lost; most the vocals remain wonderfully soft and steeped in sadness, while the guitars eventually reach a crescendo that Paradise Lost would kill for. A few black metal vocals set everything off kilter, but a final huge vocal hook comes from prog metal heaven – touches of Queensryche meeting with Anathema suggest that if Darkflight eventually decided to cast aside their funeral blackdoom for a cerebral mix of doom and progressive metal, they could take on the world. It’s certainly another stand out track.

At almost an hour long, there’s a lot of music squeezed into a dense six track release and, sure, the bulk of the sounds tread a very familiar path with not too much variety, but when done this well, it’s hard to argue with the result. There might not be much here to entice the more curious listener, but for those who love doom metal, black metal and the more niche sounds of extreme blackened doom, ‘The Hereafter’ might eventually become a cult classic.

2 thoughts on “DARKFLIGHT – The Hereafter”