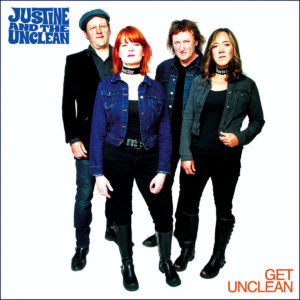 Combining members of Tom Baker’s Snakes, Upper Crust and Malachite, Justine and The Unclean already have a Boston bar band pedigree. The release of their debut single, the double a-sided ‘Love Got Me Into This Mess’/’Passive Aggressive Baby’ in the summer of ’17 represented some of the best female fronted pop-punk sounds in a long while, but there’s more to this nine song debut LP shows off more than that punky taster ever suggested.

Fans of Tom Baker and the Snakes will find an instant favourite in ‘Can’t Pretend I Don’t Know’, an upbeat rocker that borrows from Bash & Pop and middle period Goo Goo Dolls with great effect. The twin guitar sound brings a full compliment of swagger, while Justine Covault’s voice – always with a slight twang and sassy affectation – fits seamlessly into its surroundings. It’s the kind of tune that’s equal parts melody and sweat…and while you’ve heard it before in various guises (not least of all from the Rum Bar stable), it still sounds great. The way Charles Hansen’s leads meld into Justine’s choppy rhythmic guitar work suggests tightness throughout, and the chorus hook – always important here – is one that you’ll find yourself singing at inopportune moments. ‘Give Me Fire’ plays out similarly in places, but if anything, takes the bar-room sass and boosts it with a slight edge of melodic metal. Pushing the guitars forward all the more, they collide with Jim Janota’s drums, which come high in the mix throughout, crashy in style, heavy on the snare and cymbals. The songwriting portrays a broken relationship, though the protagonist is far from broken: “you’re not the one who walked away” she belts, knowing that things will be fine, before warning other potential partners to “bring fire…or leave well enough alone.” It seems this fiery redhead and her band are a genuine force; if you’re going to take them on – and Justine, especially – you’d better be more than ready.

Changing the mood, ‘He Stopped Laughing’ tips the hat to the Phil Spector hits with an intro lifted from a classic girl group number, before launching itself face first into a punk frenzy, giving the whole band a superb workout. Speed is of the essence, but a superb production brings out all the sharp edges and Janet Egan’s punchy bass certainly helps to drive this number. Egan steps up the backing vocal quotient too and brings plenty of whoahs to compliment Justine’s slightly sneering delivery, during a perfect marriage of punky riffery and bubblegum hooks. If you loved Even In Blackouts and Tilt, you’ll absolutely adore this. A similar approach to an intro works just fine on ‘Rock ‘n’ Roll Blackmail’, but as its title suggests, you shouldn’t expect bubblegum pop or girl group harmonies in the long term. One of the album’s finest cuts, there’s an equal footing for accessible melodies and garage rock toughness here, resulting in something that sounds like it could’ve been penned for Joan Jett & The Blackhearts on one of their best days. Lending a closer ear to this hard rocker, the way Janota’s unsubtle approach to the drum kit in turn allows Egan to wring the neck of her bass throughout is impressive, especially as they’re both working incredibly hard throughout (and without ever feeling as if they need to show off). A great arrangement and a great chorus would already make this one of the band’s best tunes, but the use of stops and fake endings just lifts the bar that little bit higher. This is one of those numbers that’s an instant mood lifter.

‘Worry Stone’ flips the mood back to the mid pace but never loses sight of power and volume, as Charles throws out solid power chords over an unshakable rhythm. More hard rock than retro swagger, this could be a different band again, if not for Covault’s distinctive vocal style. Cranking the tension, the drums eventually drop into a tom-heavy pound and there’s another tight but loose Replacements inspired lead guitar break to give a sense of careening greatness. In other words, if this style does it for you – again, very much in line with ‘A Boy Named Goo’ era Goo Goo Dolls – you’ll find a lot to like…and maybe even love in time. ‘Something Out of Nothing’, meanwhile, offers another harmony drenched hook on a tune that sounds like it’s on loan from label mates Watts. It doesn’t exactly pushing any boundaries or add anything new to the album overall, but it’s another chance to experience how well Covault and Egan harmonise together and for Hansen to wheel out a great solo. It might stick to a familiar formula, but two or three plays suggests it’s got more potential than originally seemed. It might even become a long term favourite for some listeners.

Of course, in addition to these rough diamonds, the album also features the three singles The Unclean gave away as free downloads in the run up to the album’s release. ‘Love Got Me Into This Mess’ mixes Justine’s familiar vocal curl with a CBGB’s sense of cut ‘n’ thrust on a number that in many ways features most of the band’s stock sounds. It’s hard not to be swept along with its enthusiasm and, if anything, it works better as part of this album as a whole. ‘Passive Aggressive Baby’ is suitably sneering power pop that glues a slightly punked up pace to a catchy as hell hook, while ‘I’m In Love With You Jackass’ takes the idea of a catchy hook and forces you to take notice. There’s a very fine line between fun and annoying and this track – presumably very much on purpose – is in danger of crossing it at any given moment. The way Justine applies her voice to a very Dance Hall Crashers-esque sense of bitchiness should raise a smile among more knowing listeners… [Grab downloads of these singles here and here.]

At just nine songs and under half an hour’s playing time, ‘Get Unclean’ could easily be accused to being at least three songs too short…but, then again, it’s also possible to have too much of a good thing. As Van Halen proved in their early years, a killer nine song album will always make more of an impression than an album that’s perhaps padded out with a couple of fillers – and that’s very much the rule of thumb here, too. Quality over quantity…and if you want more, play it twice! For fans of bar room rock, power pop and melodic punk-pop, Justine and The Unclean have something for all of you: it’s time to forget your worries and dive right in.

2 thoughts on “JUSTINE AND THE UNCLEAN – Get Unclean”