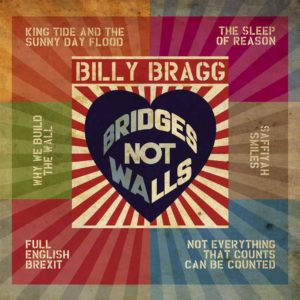 The oldest of these numbers, ‘Why We Build The Wall’ was not actually written with this collection in mind, nor was it written by Bragg himself. Penned by Anais Mitchell – a songwriter whom Billy very much respects – wrote the song in 2013. Designed to be performed as part of a stage production, the song also applies to the current climate of unease in the US. A repeated refrain of “why do we build the wall, my children” comes with various points of reasoning: “To keep us free, to keep out the enemy, and to keep out poverty” are the main objectives, but scratching beneath the surface, it’s easy to see why this narrow-minded view would never work. In closing out those who have nothing, or very little, to protect your own interests, you become very insular yourself. So, in an attempt to keep more, you end up with less. There’s more riches in the world than personal possessions. In terms of performance, it’s a simple one capturing Bragg and his electric guitar captured live in the studio. A combination of heavy overdriven chords and a naturalistic, loud vocal will please old, hardcore Bragg-heads. It’s unpolished, but therein lies its brilliance, as a sharp reminder that the young and sometimes brash man who gave the world ‘Talking With The Taxman About Poetry’ is still in there.

Far more melodic, the rootsy country-folk of ‘King Tide and The Sunny Day Flood’ should appeal to all who loved the collaborations with Wilco. Bragg’s natural timbre is joined by occasional harmonies, a wonderfully warm bass and a crying steel guitar as he offers various thoughts on environmental issues and how we need to act to save the planet. Sure, it’s a message that thousands of others have put into song over the past twenty years or more, but with 2017 drawing to a close and a world “leader” claiming that global warming is a myth and subsequently retracting various measures that have been slowly put into place, it’s a message that seems more poignant and relevant than ever.

The EP’s definite highlight, ‘Saffiyah Smiles’ tackles racism in a very humane and gentle fashion, befitting of the inspirational figure herself. In April 2017, the neo-Nazi group, The English Defence League held a march in Birmingham – expectedly, things turned nasty. Thugs threatened protesters, particularly those of Muslim beliefs. When a woman wearing a hijab was threatened, a young woman stepped in to diffuse tensions. A photo of her smiling at one of the racists went viral on the internet, becoming a snapshot of hope. Within every darkness, there is light. The resultant song is as gentle as the woman and photo that inspired it, with Bragg complimented by a full band. With “Cosplay Nazis walking in single file / Hitler’s haircut back in style” presenting a couplet that’s distinctively the work of Bragg but also brilliantly succinct and a repeated refrain of “this is what solidarity looks like” to close, there’s already much within these three minutes to love, but it’s the music which truly disarms. A fine compliment to a few numbers from 2008’s ‘Mr. Love & Justice’, it shows that political messages don’t always need to be delivered wrapped around a disarming backdrop – as often beloved by The Clash – they can be just as hard-hitting if given a sympathetic send off. ‘Saffiyah Smiles’ reinforces an important message of racial tolerance – incredibly unfortunate that there is still so much hate decades after Enoch Powell’s retirement – and might just be one of the best tunes in Bragg’s canon to date.

Tackling the subject of global politics through an online prism, ‘The Sleep of Reason’ is classic old-school Bragg, armed with a clanging electric guitar and stomping rhythm, but the greatness comes squarely from the lyric that suggests that reason and sanity have firmly vacated and that the sleep of reason “produces monsters”. …And what bigger monster than Trump – a man high on the scale of political ineptitude, but also entirely unwilling to denounce the neo-Nazi uprising that’s blighting the country at the time of this recording. He quotes Trump supporters (“he’s gonna make our country great”), singles out those who use confederate flags as symbols of strength and focuses upon those who spew politicised hate in an online world with their caps-lock firmly stuck down. In a connected world, everyone thinks their political views will be validated if only they can shout loud enough, to the detriment of those who should be heard. Interestingly, this isn’t an angry song; now in his mid-50s, Bragg sounds world weary…and this songs opening verse about how we’ll all still be connected online, saying tearful goodbyes to virtual friends “when the stars fall out of the sky”, is just bloody heartbreaking.

The first of two songs tackling the problematic issue of Brexit (at least in part), ‘Not Everything That Counts Can Be Counted’ – a melancholy slice of folk/Americana blending finger picked acoustics with more rootsy warmth from the backing band – concerns the idea that financially Britain will be better off if independence is allowed to be returned, of how “people have had enough of experts” and how those in favour of leaving the EU actually think they know better. Part of the blame – though Bragg, at this point, is too much of a diplomat to name and shame – lies with the odious Nigel Farage and how his narrow, racist viewpoint essentially got a bunch of pensioners over-excited and eventually dragged Britain into a sorry mess. The song also suggests that “all opinions are equal in the free market of ideas” which combined with having “garnered the most likes” brings things back to the internet and how even small ideals can somehow gain more validity.

The other Brexit tune, the much talked about ‘Full English Brexit’ is far less enjoyable. Some people have totally misinterpreted it as a voice of support, a pro-Brexit tale, but it isn’t the case. In this, Bragg looks at the other side of the picture and voices the thoughts and concerns of an elderly voter. Part of the problem with Brexit is/was that half the people who voted didn’t actually understand fully what the EU does and especially so for the elderly, wanting a return to a place they’ve half-remembered from their youth. People were lied to by pro-Brexit figures and that certainly didn’t help. As Bragg’s tale unfolds, it’s almost possible to picture the gentleman, sitting in his armchair in the twilight of his life, as he reels off the list of reasons he voted in favour of independence and how he thought he was, in fact, doing the right thing. With a fairly sparse musical backdrop and Bragg hitting upon a sombre electric folk sound, there are various things that make this uncomfortable – hints of racism, a feeling that the “strangers” in Europe had too much control over things he loves – but the idea that the man only wanted things “the way they used to be” and how nobody listens is rather sad. …And as the number fades out with the gentleman clinging on to a false hope of a unified and more English place to live out his remaining years, it’s bleak, especially considering (a) political changes can take years and (b) the racial angle will not change. Britain has been multi-cultural for decades and is all the better for it. It’s interesting to hear Bragg taking on the mantle for the political opposition, but honestly, it’s the weak link here. In terms of offering a message regarding the future of a multi-cultural society, he did so far better with ‘England, Half English’.

‘Full English Brexit’ aside – for that is a very uncomfortable listen – ‘Bridges Not Walls’ is almost everything you’d hope for when approaching a collection of Billy Bragg songs. Although only an EP, it’s fully formed both musically and lyrically – there’s enough here for all extant fans to have a new favourite. More than that, though, the material is thoughtful, impassioned and intellectual. It’s never perfect, but when dealing with pointed and political subjects in a world that’s far less than perfect, that’s understandable.