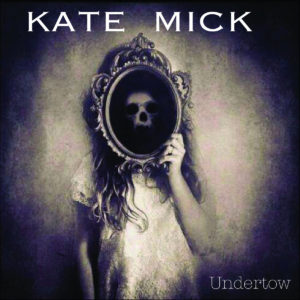 ‘Drinking About It’ wastes no time in presenting the artist’s chief concerns. Strumming the banjo rather than picking, she lays down a simple tune, over which she introduces herself via a lyric that manages to be both flippant and weary at the same time. “This anger is bringing me down”, she opines, unafraid that her maudlin mood might seem standoffish…while the steady rhythms of the music – never changing – could be a filler piece from a 70s Neil Young album or even a sparse studio experiment from the earliest Wilco. Many albums have chosen such sparse pieces to bow out, but the fact that Mick chooses to open this record with something so stark speaks volumes. Taking a similarly leisurely approach, the title cut tells the tale of a lonely heart found with Kate strumming gently at her banjo, before taking an unexpected turn that conjures imagery of being swept out of control by a water’s current. The way she chooses to increase the tempo to give that feeling of being taken by nature’s force is surprisingly effective. There’s a lot crammed into barely two minutes…

A touch pacier all round, ‘Stop Looking’ takes distinctly Apallachian folk strains and pushes them into a vaguely 50’s rock ‘n’ roll tempo. It’s very easy to imagine this – already one of the album’s most appealing numbers – backed by a rickety drum and upright bass, as if Sam Phillips decided to record Tom Waits at Sun Studios. Despite the strong musical interest, it’s Kate’s voice that leaves an indelible mark once more; although still very much approaching the song with folksy tones, the echo on her voice combined with a natural richness isn’t so far removed from some of Zooey Deschanel’s performances on the first She & Him recordings.

On ‘Take, Make & Shake Me’, more traditional folk sounds come to the fore, blending finger picked and strummed elements seemlessly. The end results come across like a hybrid of ‘Froggy Went A-Courting’ and something penned by Stephen Foster. The lead vocal comes through wonderfully clearly at all times and it’s only the richness of the voice that gives away that this is a contemporary recording. Had effects of a scratchy old 78rpm disc been applied, the roots of this track easily could have passed for something that existed long before most of us were born. It’s certainly a great tribute to traditional American folk and roots, and anyone interested in such things should definitely check out Kate’s take on such things. Again, there are strong traditions within ‘Fear For My Soul’, a number that wanders slowly as if it knows its own destiny, carrying bits of folk and country as it goes, as well as the ghosts of Karen Dalton and traces of Gillian Welch. With a strong, old-fashioned hook thrown in to the mix, this sounds like the work of an old soul; the sound of a musician who could have easily recorded the same song decades earlier.

The short and observational ‘Hurray’ makes Kate sound more like Deschanel than ever with a rich vocal taking the reins, while a strummed banjo takes on the mantle of the largely inferior ukulele. It’s a lovely tune that wins out, proving that things don’t ever have to be complex to make an impression, while ‘Get Lost’ touches upon more personal feelings, this time the inevitability of withdrawing into oneself from time to time. Without losing the Americana root – as always, her banjo takes a sizeable role – there’s something richer at play, as if there are touches of country jostling for attention. It’s another album highlight in that it doesn’t try too hard; it just works, thanks to a timeless sense of melody.

Obviously, a singer songwriter who decides that a recording featuring voice and banjo alone would make as captivating and accessible a listen as the more traditional voice and acoustic guitar combo is a very brave one. To Kate’s credit, though, there’s something about this album that’s sort of timeworn and yet timeless. That’s largely down to her lovely vocal style, but it’s more than that: there’s an honesty to the material and an immediacy in the recording itself that suggests had it all been recorded another night and in a different setting, the same record could have turned out rather differently. Whilst not an every day listen, ‘Undertow’ is certainly one that’s recommended for listeners deeper into traditional Americana.