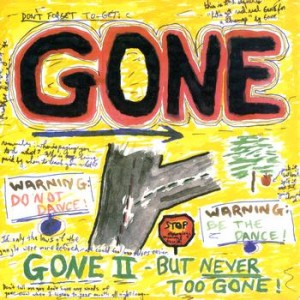 ‘Jungle Law’ opens with slap bass, so you’d be forgiven that we’d be beginning with a hard funk workout, but this kicks in to a slow tune with heavy, pounding drums (courtesy of Sim Cain); there’s no messing here – it’s simple and aggressive.  Cain’s drums are the dominant force, possessing a strong reverb as if they were recorded live.  Beyond that, this number is extremely difficult to listen to – Ginn’s leads are ugly and Andrew Weiss’s basslines take fuzzy into new dimentions.  Imagine a funky take on the uglier elements of Black Flag’s ‘My War’ for a musical pointer: they’ve not so much caught your attention as grabbed you by the neck and smashed your face against a wall.

‘Unglued’ is much tighter and faster and could’ve easily been a Black Flag tune.  It’s not a great leap of the imagination to imagine Rollins bellowing over the top.  It’s moments like this where the full potential behind Gone is realised: it’s a simple fact that here (as with the first Gone album), Cain and Weiss are a much better rhythm section than any Ginn had throughout the years in Black Flag.  Let’s not do Kira Roessler or the legendary Bill Stevenson any kind of disservice…but Weiss and Cain are, frankly, awesomeness personified.  Check out the slap bass funk of ‘Turned Over Stone’ if you need proof: the funk sections of the number are superb, but they’re stylistically diminished by other factors creeping in… There are moments where Cain bashes his drums in a free-jazz manner,while the other guys sound like they’re tuning up; elsewhere, a waltz time signature serves as a base for Ginn to bash his fretboard in particularly unrestrained manner.

The intro of ‘New Vengeance’ wanders into atonal, almost free jazz territory again.  Cain just about pins everything down with decent a decent hi-hat, but once they’ve got that out of their systems and decided on a more solid direction, this number takes a swaggering rock approach which is more than welcome, since it can be incredibly thrilling to hear Ginn tackling something so rhythmically simple.  The jazz stylings reappear on the short ‘Yesterday Is Teacher’ and to painful levels during ‘Unity Hole’, which is absolutely void of a tune (almost certainly on purpose, for Greg Ginn always loved pushing the extremes). These moments are balanced by Gone completely rocking out during ‘Daisy Strut’ (with a classic rock swing) and ‘Adams’  which is effectively a decent bit of garage punk, with a slight metal influence. On the latter, Cain and Weiss prove themselves – yet again – to be a fantastic rhythm section, laying down a solid groove in which Ginn weaves angular guitar lines, creating a classic number in the process.

In terms of avant-garde jazz-rock fused with a hardcore punk attitude, Gone may not have had much competition (save for perhaps The Minutemen), but their early work remains in equal parts raw, frustrating, challenging and brilliant. The debut sets out the band’s musical intent, while this successor gives a much better sense of how well these three musicians can work a groove. On this album, the loose nature of some of the material can be daunting at first, but when they get it right, these three guys really mean business. In short, despite the low budget recordings and general discordant attitude, if you’re a fan of any of the musicians involved here, ‘Gone II – But Never Too Gone’ should be required listening.  If you’re only a casual admirer of Black Flag, or Ginn’s atonal approach sets your teeth on edge, there’s nothing for you here.

Ginn, Cain and Weiss represent the core of the greatest Black Flag line-up that never was.  Rollins obviously knew this – when this line-up of Gone broke up, he chose Weiss and Cain for his own band.  They played with him for seven years in what was arguably the best Rollins Band line-up, culminating in the sprawling and hard-hitting ‘The End of Silence’.