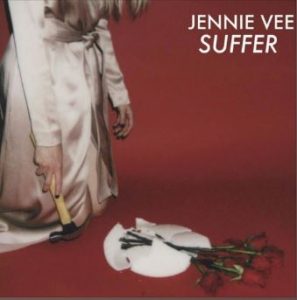 Her third solo release – 2017’s ‘Suffer’ – is neither as angst-ridden as its title implies, nor does it take in any garage rock influences from her experiences with Josh and company. The good news for fans of ‘Die Alone’ is that ‘Suffer’ essentially taps into a very similar vein to that release.

Lead track (and single) ‘Hospital Bed’ begins with a real intent, as a hard chord progression recalls the coldness of The Cure’s ‘Pornography’ LP, before stretching into some great indie rock with gothy undertones. The bass may be meaty, the bulk of the guitars forthright, but this sour gumball has a very sweet centre: against the music, Vee’s lead vocal gently drifts in and out, sometimes very clear, sometimes less so. When tackling the chorus – a hook that takes a few plays to really embed itself into the subconscious – she sounds assured, a little like a hazier version of Tanya Donelly; the verses, meanwhile, are far more appealing since Vee takes these opportunities to approach things in far more of an otherworldly dream pop fashion. There’s no unnecessary padding here; it’s all about the simple riff combined with the voice, but stylistically, it works very well.

That said, it isn’t the best track on the EP. That honour would be close run thing between the title cut and a very straight but utterly enchanting cover of The Cure’s ‘A Night Like This’ [originally from their album ‘The Head On The Door’, which might just be Robert Smith’s masterpiece]. With regard to The Cure cover, Vee does nothing to change it, at least not dramatically – after all it’s stodgy mid-pace and multi-layered approach is tailor made for her. What she brings to the track is a lighter approach to the voice: in the hands of Smith and his trademark croon, the lyric retains a nihilistic darkness; with Vee – in full on, ethereal dream pop mode – her imploring that we should “say goodbye” feels more like a siren’s call. We know it’ll end badly for us, but go with her we must. In terms of paying tribute to a favourite band, it’s both respectful and gorgeous. The title track offers something a bit more upbeat. An unashamedly 90s drum beat leads the way as a noodling guitar tops a rhythmic jangle. With her bass pumped, Vee holds everything together with a solid performance, while her heavily treated vocals are loaded with so much nostalgia. The cheeky melody linking the verses is a nice touch, while the bulk of the number plays out like a faultless homage to The Cranes, though possibly jamming an old tune by The Sundays. By the time these four minutes are up, there’s not much here that wasn’t present all that time ago on ‘Die Alone’, but the urge to listen again is already strong.

Going back into something more moody, the spectre of early Lush is unavoidable throughout ‘This Feeling’, but as already shown, these kind of woozy, bass heavy sounds combined with a crisp lead guitar are a great foil for Vee’s voice. There are far fewer filters here, which only works to the number’s benefit. If you’ve succumbed to Jennie’s sounds so far, by the time she hits the line where we’re “ ”, chances are, you’ll positively melt. While the majority of this tune sticks to a heavy mid-pace, a brief sojourn to faster things highlights some great bass playing, as well as drumming that draws influence from the early work of Lol Tolhurst. Another genuine highlight – although, the quality threshold is very high on this EP, it must be said – ‘The Last Time’ sticks firmly to a tried and tested approach, opting for a very unashamedly late 80s goth-meets-dreampop backdrop, but as with the majority of Vee’s work, the instrumentation is always thoughtful. The keys swell against the lead vocal in a way that taps into early 80s synth pop which takes a would-be simple chorus to new heights, while a measured beat is perfect for a jangling guitar that’s one part Mighty Lemon Drops and three parts ‘April Skies’ by Jesus & Mary Chain. In other words: it’s all good.

Overall, while it doesn’t do anything especially different to any of Jennie Vee’s previous solo releases, a strong case can be made for ‘Suffer’ doing it better. This is slick and sincere; the ultimate tribute to the great records from the 4AD stable. If you’re a fan of Eagles of Death Metal and you’ve approached this EP through sheer curiosity, there’s no guarantee you’ll like this. However, for dream pop devotees and the gently shoegazing gentry around the world, this will certainly mark out a place as one of the year’s most perfect releases. Just lovely.