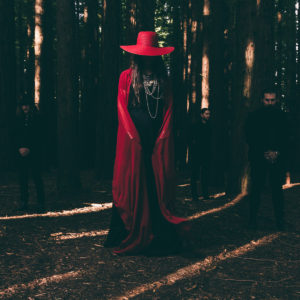 There have been some great stoner and doom bands surface over the first part of the twenty first century. Whether recycling straight up Sabbath-isms, or channelling Fu Manchu-esque dusty grooves that sound like they’ve been borne from a sweaty, clapped out van, this unashamedly retro sub genre of metal rarely disappoints. It’s so often predictable, but that doesn’t diminish from it’s overall power.

Every once in a while, a band appears on the scene that – although still treading a very familiar path – also seems to raise the bar. Such is the case with Devil Electric, a four piece stoner metal outfit from Melbourne whose riffs are so big, they could cause a tremor somewhere in the outback. Their 2016 EP, was hugely enjoyable, but their first full length exceeds expectations.

‘Monologue (Where You Once Walked)’ kicks things off with intent, as the buzzing of amps and feedback ushers in a slow and heavy riff, pulling the best from Sabbath in a way that so many have done since the 70s. Eventually finding a groove – a word that best befits so much of the record to come – things speed up a touch and Devil’s Electric choose to fill the verse with an uplifting sound that appears to fuse classic stoner with an almost 70s glam rock stomp. Pulling the best from each of these moods, the rest of the track alternates, always sounding exciting and vibrant. The way the musicians jell is so important for the Devil Electric vibe, but it’s vocalist Pierina who steals the show; her crystal clear vocal style is instantly appealing, providing a superb contrast to the darker and mumbling backing vocal throughout the number. Taking a steadier pace, ‘Shadowman’ both accentuates the harsher edges of Christos Athanasias’s guitar tones as well as giving Pierina another solid base to work from…and this time she pushes her vocal to match the heavy riff with impressive results. While this tune doesn’t really have an instant hook, it has so much more of everything else you’d look for with regards to great stoner, making it a highly recommended listen.

After a couple of heavy affairs, it’s time for something slightly funkier. ‘Lady Velvet’ – a sure-fire highlight – drives a riff that has the tones of Fu Manchu, the melodic root of Jane’s Addiction’s classic ‘Mountain Song’ and the haunting beauty of Mad Season. The first half of the track really shows how the band are fluid players, with bassist Tom Hulce and drummer Mark Van De Beek locking into a groove that allows Christos to really work a riff. …And all of this before everyone changes tack and drops into a slightly heavier workout, with plenty of stops and space showing off a real tightness. Here, an already fine vocal performance rises from a solid cry to full on wail, and with the band coming together and closing with a tough but succinct solo, their work is more than done. This is an essential listen…no mistake. Stretching things out a little farther, ‘Acidic Fire’ isn’t as dark as its title suggests, but with the main riff instantly hitting upon a classic sounding stoner melody and with O’Brien in great voice, it sets itself up as another must-hear. For the chorus, things slow down a few notches and there’s a threat of something a little heaver, but what transpires is a forceful lead guitar bridge followed by a straight repetition of the initial melody. This track takes a few more spins to work its magic, but with a Geezer Butler inspired bass rattle eventually taking command and room enough for a huge, echoing lead guitar there’s plenty to love, especially if you enjoy bands like Witch Charmer, Black Moth et al.

Reaching the midpoint of the record, there’s promise of so many more superb riffs to come, not least hinted at by ‘Monolith’, laying down a suitably heavy groove. This instrumental cut features some devastatingly heavy bass work, underscoring a bottom end chug that’s near timeless. The heaviness is occasionally pierced by reverb and echoes, but the riff is everything – much as the title suggests. Oddly, even with such a great groove in place, the band chooses to use this as an interlude, bowing out before the two minute mark is even reached. There’s no time for disappointment to set in though, as what follows is one of the album’s absolute highlights. Throughout ‘The Dove & The Serpent’, these Aussie stoners take a sidestep from their usual approach and tap into a slightly more psychedelic desert rock sound that’s pretty close to the lighter moments of Down’s ‘Nola’ [such a shame that band’s reputation got somewhat ruined by Anselmo’s fascist saluting in 2016] interspersed with the infectious buoyancy of the legendary Fu Manchu. Throughout this excellent piece, there’s a genuinely other-worldly atmosphere built up; the quietest moments are most welcome, too, as they allow a greater opportunity to hear the soulful edges of O’Brien’s voice come through. With a Sabbathy riff and a simpler hook factored in, everything seems more akin to Ruby The Hatchet than anything, but the results are more than enjoyable…again.

Moving into the last part of the album, there’s a sense that the last three numbers could all be filler and ‘Devil Electric’ [the album] could still find a place in 2017’s top ten metal discs, but fear not…each of this trilogy of tunes that brings us closer to the end of a more than solid 37 minutes just gives another reason why Devil Electric [the band] are among the finest bands on the stoner rock underground. From the playfulness of the lead bass introducing ‘The Sacred Machine’ to the slow and threatening tones of ‘Hynotica’ – again showcasing Hulse’s pulsing, upfront bass style against a thoughtful and impassioned vocal – and the downright spooky instrumental ‘Lilith’, it seems as if Devil Electric have planned everything in such a way that their voyage through what can be a very narrow sub-genre of metal so often feels more expansive.

Overall, it would be somewhat of a stretch to suggest Devil’s Electric try to bring anything original to their chosen style, but there’s little doubt they know the value of a condensed approach. Over half of this album’s songs are in and out in under four minutes; this streamlined approach really works and, as such, Devil Electric are among the very best when it comes to female fronted stoner sounds. A sure-fire rival to the UK’s Black Moth and Witch Charmer, France’s MissingMile and the US’s cult stoner groovers Ruby The Hatchet, this Australian band now sound ready to take on pretty much anyone and everyone in the heavy stoner stakes. This self-titled full length starts with a real intent and by the time it’s all over, you should be ready to hear it all over again. Riffs, riffs, a great voice…and more riffs: you couldn’t ask for more from a potential genre classic.