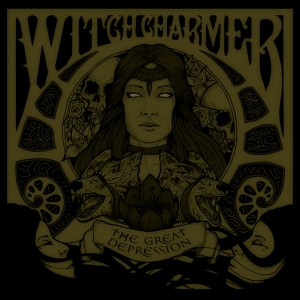 The debut EP from Sunderland’s Witch Charmer – 2013’s ‘Europhoric Curse’ – presented four slabs of top-class metal.  As a near-perfect example of the more accessible end of the doom metal/occult rock genre, they needed to work hard to surpass its greatness on any follow-up recording.

Those who enjoyed the EP will certainly find much to love when approaching ‘The Great Depression’.  Before taking any of the music into account, it should be noted that Witch Charmer have not approached this full-length release half-heartedly: the shortest piece on the album clocks in just shy of seven minutes, while a ten minute closing statement pushes the band to a fantastic climax. On each of the five tracks, the riffs are almost entirely of the huge variety.  These aim to hit the listener square in the jaw right from the get go as the aptly named ‘Suffer’ crawls menacingly through seven minutes worth of moodiness that’s wonderfully low-tuned without ever feeling low-key.  With a fuzzed out riff in the right speaker channel, the track wastes no time in announcing its arrival and is joined quickly by a chugging bass and a solid approach in the drum department.  Adding much melody to the band’s weighty sound, vocalist Kate McKeown cries each line with a tone that’s oddly angelic in its own way, the longer notes wavering atmospherically with a tough delivery matching Black Moth’s Harriet Bevan for all round presence.  In stark contrast to the aforementioned Leeds stoners  – the band with whom these recordings could be most directly compared – Witch Charmer have an extra element within their aggressive musical arsenal – the darkly ethereal, but always melodic female voice is counterbalanced by a male growl.  On this number, that second voice has natural presence that’s up there with Mastodon’s Troy Sanders in that it’s not always the most tuneful or appealing…but the pull between the two voices is smart, keeping things interesting throughout.

During ‘The Cull’, the riffs slow down, leaning further towards doom than groove.  This slower riff has potential, but isn’t as instant on the ear as some of the material here.  The more basic approach to the music is complimented by a great production, tapping into a truly heavyweight sound and some fantastic vocals. The Mastodon-esque voice is joined by a third voice echoing somewhere in the back, while McKeown adopts a natural leading role. The despair in her voice appears more evident than before…and with almost every line heading into the distance with via a powerful cry, she shows no sign of weakness in her delivery as she absolutely nails each of those huge notes.  Possibly the most commercial number ‘A Watching of Wolves’ kicks off with a heavily wah-wahed guitar crying from the left speaker channel, quickly developing into a distinctive quasi-blues riff which returns throughout to create a very memorable musical hook.  Meanwhile, over in the right channel, a sludge-fuelled bass brings a mighty bottom end.  Linking both musical elements, a crashing drum kit – complete with brilliant live in the studio sound (as per the Rodger Bain produced Sabbath LPs) adds a huge amount of weight.  Bringing together all the best elements of the first two numbers, it is this third track which elevates ‘The Great Depression’ from the “good and solid” stakes and up towards “essential listening”.

In terms of vocal performance, ‘To Death (I’ll Drink)’ is an absolute corker, almost equal to ‘The Cull’.  Across an incredibly slow riff – a threatening, lurching set of chords rivalling Electric Wizard for initial intensity – McKeown takes the line “Because of you, I’ll drink myself to death” and weaves magic, her sad voice rather haunting when set against such a dark musical canvas.  The other featured voices get to stretch a little farther too, since the track includes harmony vocals in a most melodious way (showing off each voice in a more effective manner than their preferred call-and-response techniques). Before such harmonies please the ear, though, there’s a lot of slow and doomy riffing on hand to both thrill and threaten.  Richard Maher’s bass work is far more evident on parts of this track too, leading things off with a great thudding of strings before three minutes of slow, grinding riffery, reaches an intense peak.  The funereal pace isn’t always in force, of course, and things eventually gather pace when the band inject a huge groove into their brand of doom, the riffs almost danceable in places  – much like the second half of the Black Sabbath title track.  It’s here the talents of guitarists Len Lennox and Adam Clarke really show themselves via a twin attack of downtuned fuzz and crunch that carries a timeless (ie: early seventies) metal sound.

Matching ‘To Death’ for all round greatness, closing track ‘Stare Into the Sun’ presents ten minutes worth of near-faultless doom rock.  Following a slightly trippy intro, an opening riff takes on the slow dread of Black Sabbath’s genre defining ‘Electric Funeral’ before filling the next three and a half minutes with a fabulous rattling groove.  As the band quicken pace, a heavy influence from Fu Manchu becomes evident, while the lyrical content – all darkness, shadows and occultish tones – couldn’t be farther away from anything Fu Manchu have offered in the past in their frivolous stoner world of monster trucks and skateboards.  All darkness, shadows and sunblindness, this taps into Witch Charmer’s occult persona excellently, before things shift at the 4:45 mark to bring an even heavier mood.  The main riff has fewer groove-based elements, preferring instead to crank out a simple, monolithic chug – and with it, a fairly obvious tip of the hat to the mighty Goatsnake.  In slowing down, drummer Dave McQuillan leads the band into a musical void – but no matter how ominous and spooky things get, Witch Charmer sound completely natural in their role as harbingers of metallic doom.  At 8.00, the deep riffs begin  to fade…leaving the listener wanting far more, especially considering the fade in question is unnaturally slow with echoes of the band still being heard at nine minutes and beyond.

A hidden bonus track showcases some unexpected clean guitar notes.  An almost spooky eastern sounding instrumental acts as a backdrop for a spoken word sample from cult Aussie film Bad Boy Bubby, which among other things speaks of belief, of gods and of torture and how we must think god out of existence.  The theme certainly suits – and as far as hidden tracks go, it feels like more than an afterthought, especially given the excellent guitar tones.

There are three words which best sum up ‘The Great Depression’: riffy, dark, intense – the first being of the greater importance.  More accessible than the bulk of work of Witch Mountain, heavier than the brilliant Black Moth, this release’s combination of superb vocals and all round weightiness makes it a must have for most doom/stoner rock fans.