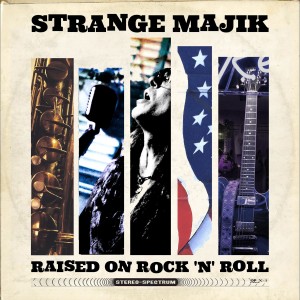 In fact, four tunes from The Dead Exs catalogue – two from each album – are given a makeover. The once funky but gritty instrumental ‘Nolita Strut’ has now come of age; the main groove is unchanged but has been allowed to expand on it’s theme. Whereas it once sounded like a Beastie Boys instrumental, it now swaggers with a real maturity, like something more soulful. This is due in part to a much better production, but the addition of electric piano and a glorious sax taking up the main melody is a great improvement. After a couple of minutes jamming out the original riffs, the band cut loose on an instrumental jam that’s rather joyous. This is where the real “majik” happens: the electric guitar launches into a jazzy solo, the keyboard gets busy and the rhythm section suck up the spirit of the band on Stevie Wonder’s ‘Songs In The Key of Life’. It’s all good: different, but the same, if that makes sense. In more of a spacious mood, ‘Gone’ – originally a noisy blues affair on the Exs debut – takes on an aching and haunting slant, with the vocal crying against a jazzy upright bass, smokey piano and some sparse guitar clankings. As the track gains momentum, the bluesy guitar leads take hold and the placing of a live sounding riff against a thoughtful piano is ultimately its strength. It’s easily recognisable as the old Dead Exs track, but it’s better on every level; even Pattillo’s voice seems more at ease when backed by the deeper arrangement. As the instrumental plays out, with the jazzy bass, blues guitar and lounge-ish piano playing off one another, the effect is closer to hearing some of Chris Rea’s twenty-first century output than anything Pattillo has tried before…but that’s not a bad thing.

‘If You’ve Got The Time’ – a true stand out from the second Dead Exs LP – is presented here at a similar tempo, but with an amplified heart. The guitars take a back seat to a rip-roaring sax line and bar-room piano, while the main vocal is complimented by a soul choir. More of an embellishment than drastic overhaul, this is guaranteed to impress those sophisticated party guests and really get your house jumpin’.  ‘Don’t Mess With The Girl From Texas’ is more downbeat, opening with some bluesy guitar runs and voice, more John Lee Hooker than Stevie Ray. In this solo guise, Pattillo sounds heart full, almost as if he could sustain the whole number alone, but the band come to his aid. Dropping effortlessly into a tune that’s almost identical to the original recording at first, just peppered with a funky swing on the drum line, it’s good…but upon reaching the second chorus and beyond, it really comes into its own, with a New Orleans boogie piano, more brass and brassy backing vocals…and that’s a great move all round.

Those four recordings would make this a sure-fire purchase for those who’ve followed Pattillo’s previous releases, but digging deep into the other songs, there’s so much to like. ‘Listening To Leon’, a number inspired by Leon Russell, comes with a defiant 70s bent, with a loud bluesy guitar driving against a keyboard sound that seems as if it could drop into ‘Three Is The Magic Number’ at any point. The rhythm is tight, the voice a little softer, but one of Majik’s finest vocal performances to date; his guitar playing is lean but tough and dominates in places, but he’s outdone musically by the shamelessly retro keyboard work. That definitely leaves the strongest impression. Tailing off with a jam that cooks nicely, this is a workout that’s big on balls, but surprisingly short on excess. The title track follows suit, but trades in some of the natural flow for a meaty bass and drum groove, over which various legends get name-checked as the protagonist tells of how he arrived at this point. Fans of bluesy rock – middle period Allmans, Foghat and Black Stone Cherry etc. – might get a kick out of this tune, but it’s not just lazy recycling: in his borrowing from the past, the performer brings love, inspiration and a touch of his own flair as opposed to merely regurgitating retro sounds. Joe Bonamassa could learn something here (even if it’s a lesson in quality, not quantity).

Those are high points, indeed, but the punchy ‘Going To Miami’ – a kind of blues and Stax soul hybrid – outshines each of them. Firstly, it’s superbly slick arrangement provides the perfect showcase for the bluesy guitar work, but beyond that, there’s a song guaranteed to lift the spirits, since it’s powered by a really timeless sounding horn section. If Albert King had jammed with label mate Rufus Thomas, the result might have sounded something like this [nb: obligatory dog not supplied.] A bit of a left field musical moment, ‘Cocaine Kisses’ changes up the soul and blues for a shuffle, with the musicians tapping into something that borrows from country rock as well as rock ‘n’ roll. It’s too busy to be directly inspired by JJ Cale, yet not raucous enough to be a successor to Skynyrd; while gaining the dubious honour of being the LP’s weak link, it’s fun…and maybe that was entirely the point of the exercise.

Elsewhere, ‘Workingman 99’ – a tune which originally appeared with a reggae bias on ‘Lights On‘ – serves up hard blues with a severely funky swagger. It comes with a reasonable chorus hook and an effortlessly cool sax too, but the simplicity of the rhythm is it’s saviour. Although previously unheard, ‘Electrified’ is very much a throwback to that same long player, at least stylistically, as a smooth funk groove owes more to The Brand New Heavies than dirty white blues or retro rock; it’s a pleasing and somewhat necessary change of mood, but is less immediate. Closing the record, Majik reels us in with a downbeat blues number, ‘Pull The Trigger’. There’s a touch of the Stones at play, as this sounds like a low key moment from ‘Sticky Fingers’ or ‘Let It Bleed’, but then, the rest of the arrangement slowly bleeds through and it fills plenty of musical space. First, the electric piano, then the bass. With each step, things become fuller and – bam – as the whole band chimes in, this becomes a bluesy rocker par excellence. The electric guitars add more than a feeling of Dead Exs’ times of yore, but with the added sophistication of a smoother approach. By the time everything hits full flow, a choir of voices and saxophone reinforce the soulful approach of the rest of the record and everyone sounds as if they’re having a blast.

‘Raised On Rock ‘N’ Roll’ is terrific. It’s varied but coherent, and if sometimes this love letter to a musical history appears to wear its influences rather heavily, then its purpose has been fulfilled. Hearing these songs – especially for the first time – is a little like taking a trip back via a record collection that never previously existed. That’s far cooler than taking the lazy cover version route. Visions of worn out denim, flared trousers and smell of nostalgia run through its grooves and yet the songs somehow come kicking and screaming into 2016 with a real reverence. For anyone with a passing interest in funk, blues, AM radio rock and the classic sounds of the early seventies, this album is a veritable treasure trove. Don’t miss it.