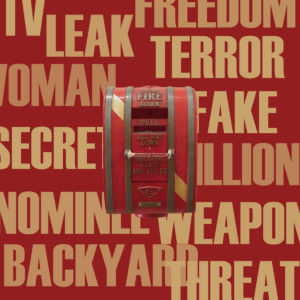 The circumstances may be loathsome, but new music from Strange Magik (in any guise) is always welcome. Despite the ugly lyrical concerns, this EP presents four tracks that will be embraced by the Strange Majik/Pattillo supports across the US and beyond. The title track kicks off this provoking listen with a hefty retro riff, as Majik’s grubby lead guitar runs meld with an even more retro keyboard line, its sounds echoing Stevie Wonder’s mid-70s greatness with traces of Cream and Derek & The Dominos. The rhythm section beefs everything admirably and, with a solid groove set in place, it’s up to Pattillo to deliver his message. While there might seem a little too much repetition of the title at first, it’s soon clear that this is very much intentional; the crisis in question smashing the listener like a verbal battering ram. There are laments for the state of the US in general, for the fact that so many right wing views are becoming the norm and how the lack of care for environmental issues is eventually going to royally fuck everyone. The government chase ever more after their own ends and conflicts; “we the people” are in danger of being swept up in fascism. There are certainly songwriters out there who’ve tackled social issues with a cleverer and wordier stance, of course, but Dylan and Billy Bragg never had so much shameless swagger.

Barely missing a beat, ‘Don’t Let The Demagogue Get You Down’ hits hard with one of the funkiest riffs ever, as Colin Taylor (drums) and Chris Gaskell (bass) grab a hold of the reins and wheel out a sound that’s really inspiring. The addition of guitars soon shifts this from the Stanley Clarke school of fusion and into a meaty groove that’s almost a cross between Lenny Kravitz and Parliament. The sound that emerges is far more buoyant than anything from ‘Raised On Rock ‘n’ Roll’ and yet easily recognisable as coming from the same stable. In short, it represents some superb modern funk rock. From the outset, Pattillo urges everyone to “rise up” and challenge the things we hear, question the “media frenzy” and to “take it right back”. In addition, a call to “talk to your neighbour” is also a nice, gentle warning against fear and the brewing racism. The music ensures it never feels too confrontational, but the anger bristles constantly under the surface. The groove continues unabated and Pattillo wrings the neck of his guitar until the sound is so forceful, you’d think the musicians just couldn’t take it any further. However, there’s one more element which makes this the EP’s standout track: Cherrye J. Davis steps in on guest vocal…and man, she can really wail. Her huge and soulful belt is the perfect contrast to the huge grubby riffs. There are times where the top end of her voice and the guitars battle for dominance…but it seems to end in stalemate. If you love a retro riff and a hefty hard rock sound, but also crave a soul and funk heartbeat, this track is the perfect musical remedy.

‘Protector’ offers some mellow blues sounds that occasionally hint at Funkadelic’s ‘Maggot Brain’ for atmosphere. In many ways, Pattillo seems most at ease here, as his guitar work comes in fluid runs, which when set against another very retro keyboard line results in a great listen. There’s an ache in his voice that’s not always present elsewhere and the addition of a noodling sax just sets everything off excellently. There are moments where there are ghosts of a Strange Majik past, as there’s a soul inflection that is perhaps closest to ‘Lights On’ than anything else…but the way this number smoothly edges its way along is very appealing indeed. The arrangement rarely changes from its initial groove, but with the sax adding great melodic lines throughout, it doesn’t have to do anything out of the ordinary to entertain. In fact, for all of its combination of familiar sounds and influences, this number still manages to come with a heart that reaches out to its audience; often reaching out as if it wishes them to listen as if hearing things for the first time.

If you figured things couldn’t get any scarier, the EP bows out with ‘White Power Machine’ – a lyrically scathing attack on president 45’s political stance, of how he’s gradually replacing experienced politicians in the White House with men who appear to harbour neo-Nazi viewpoints and how their chief interest seems to be spreading hate to destroy the US from within. Much like the title cut, the hook is over represented, but again, the lyric is very much used as a thought provoking tool. This time, the Strange Majik retro ear casts itself closer to The Allmans or Black Crowes than the expected blues fusion. The cleaner guitars have a fabulous tone throughout and the use of trippy vocal filters and reverb on various guitar passages is a great touch. It might be loaded with a lyrical fear, but the music is gorgeous…reminiscent of days gone by, but retaining a timeless style. Be sure to keep a close ear when listening, too: beneath Pattillo’s guitar runs, there’s some rather fine bass work courtesy of Kevin “KJ” Jacoby – very much in a lead style, but so understated, almost as if he doesn’t want to cloud the message. With everything eventually fading out into improvisational and slightly atonal piano work, there’s very much a sense of unease poking at a fine tune. This is an arrangement that, in much happier times, almost certainly would have been used for something more love-oriented.

Just as the previous album was celebratory, this EP is accusatory, angry, sometimes even fearful…and with good reason. It’s the yin to the yang. Pattillo could have held these songs back and given them pride of place on a full recording – perhaps even tempered them with a few more uplifting rock ‘n’ blues belters – but he knows the time to speak out is now. We only have now. Overall, ‘Soul Crisis’ (the EP) isn’t always easy, but it has all of the groove and vibrant style you’ve come to associate with the artist in question…and if it’s responsible in its own way for getting a few more people out into the streets and up on their soap boxes, all the better.