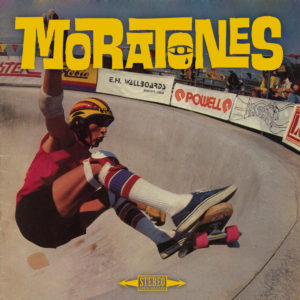 Every week, new bands surface playing homage to the Ramones, The Queers and their ilk, and about once a month, you’ll probably find one good enough to add to your regular punk playlist. Such is the case with Moratones, a Spanish take on classic pop punk themes. On this EP release, their music is played with such authenticity that, within about a minute, you’ll completely forget that the vocals are all in Spanish and just get swept along with the band’s general love for the style.

Following a sample from Spanish TV, ‘La Masacre’ kicks off with a melodic lead guitar riff before settling into an upbeat, punky workout. Despite the band’s preferred modus operandi, though, a huge chunk of this short track is dominated by muted riffs and more of a bouncy power pop stance than the by-numbers Ramones elements. By including these muted moments, Moratones show from the get go that they could branch out and the presence of a reasonable chorus melody means this track has a little of everything. Moving on, in exactly two minutes, ‘Ser Animal’ demonstrates more of the same, but cranks the intensity just a little. It doesn’t necessarily result in a better vocal, but the rhythm guitar lines are an improvement, adding a couple of really pleasing chord changes in with the muted chops. A sloppy lead guitar break settles somewhere between The Queers and the UK’s own Buzzcocks – and all things considered, it’s a great track.

By track three, ‘Un Tiro Mas’, the band have really warmed up, chugging out a riff that mixes Ramonescore tightness and speed with a little of the carefree attitudes found on an Apers disc and they also throw in a brief garage rock guitar solo for good measure. If it wasn’t clear before, this track shows how serious the trio are regarding their short, sharp, punky attacks – and even for non-Spanish speakers, the repetitive chorus hook very much stands out as a highlight. Lastly, there’s even more melody at play, as ‘Futuro Condicional’ delivers on a classic pop punk riff, coupled with the bouncy power pop slant from the earliest Undertones records. While Gonzalo’s lead vocals are high in the mix and his enthusiasm is clear for all to hear, it’s his guitar work that wins out, adding a dominant melody that crosses the bands own ‘La Masacre’ with elements of classic Screeching Weasel. Tailing off with a repetitive melody and a selection of gang “whoah”s, this is a classic piece of melodic punk that really shows Moratones at their finest.

When played well, classic pop-punk never gets old. Judging by the four tracks on Moratones’ 2016 EP, in the hands of these three Ramonescore obsessed Spaniards, their tried and tested four chord and high speed style is already solid. Could the Moratones take on The Manges, Tough – even The Apers – in the race for the continental punk pop crown? The music here represents early days but it already shows potential to thrill as well as any Euro band working in a similar field.

[The EP can be streamed in its entirety using the widget below. It’s also available for download on a “pay what you want” basis.]