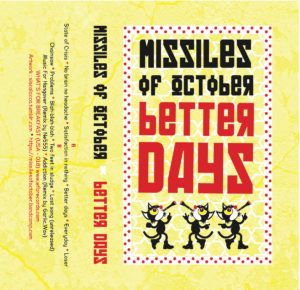 Belgium’s Missiles of October have been cranking out their own brand of post-hardcore/noise rock since 2012. Approximately five years on from that time, the self-proclaimed “three old guys” are still very much an underground act, gleefully making listeners’ ears bleed whilst recycling various familiar influences. Their 2017 release ‘Better Days’ really drives home their love of retro hardcore, Jesus Lizard-esque angular art rock and more, in a package that some will find hard to swallow and yet others will lap up with twisted merriment.

It’s an album which very much fits its lo-fi cassette boundaries, trumpeting a sound that’s both hard and fuzzy, reminiscent of the days of 80s analogue. It’s not just about noise, though; peel your ears back just a little farther and you’ll discover various tracks of tight grooves as well as pointed anger – and Missiles are very much one of those bands that prove three is the magic number when creating hardcore noise on a scale of minimum manpower. [The two-man garage rock thing is great and all, but you can’t beat a bit of driving bass work].

With a fuzz bass and crashing cymbal, ‘State of Crisis’ sets out the band’s stall with immediate effect, with spiky rhythmic riffs dropping in and out of a hardcore punk pacing. With an incessant and lop-sided groove more than in place, the vocals lurch and growl like a drawling cousin of the younger Lou Koller; there’s no room here for lightweights! With more room for manoeuvre, the slower ‘No Brain, No Headache’ combines the previous trashy sounds with a slow garage rock/stoner hybrid – something with direct links to the ‘Gluey Porch Treatments’ era Melvins. With the bass much higher in the mix, there’s a truck-like intent even if the lo-fi production values never allows anything to reach speaker busting levels, while dual vocals alternately drawl and scratch their way through a fiercely intense four minutes.

‘Satifaction In Nothing’ mixes all of the previous elements to reveal a more angular sound on a track where piercing guitars punctuate a shouty vocal with great effect. While it’s a number where the main drudging riff aims to take over everything, every care is taken to make sure there’s a great balance between each of the instruments. Heavy and arty, it’s like experiencing a more accessible Jesus Lizard, bolstered by a great Jack Endino production. The title track, meanwhile, hammers through almost two minutes worth of garage rock, as if a band signed to the King Pizza label had taken to covering (the) Germs. Fast and hard are the important factors here…and while it represents the kind of trashy/thrashy rawk you’ve heard many, many times, MOO’s enthusiasm and energy ensures it’s still a great listen. They then flip everything on it’s head, moving swiftly from uptempo garage to slow stoner grooves, with the monolithic ‘Everyday’ pushing the bass forth and really flaunting the Melvins love. Rarely more than a mid paced lurch is attained, and while it might never become a favourite (especially sequenced next to a standout in the way it is), there’s a sense of determination and weight that’s hard to argue with.

Comprising a heavy fuzz bass and semi-sludgy groove, ‘Loser’ is the perfect mix of stoner metal and garage rock, showing Missiles’ hybrid sound approaching the more accessible but never losing an ear for toughness; ‘Chainsaw’ sweats to the old-school with some straight hardcore garage punk, with nods to the Canadian stream with hints of D.O.A. and NoMeansNo before ‘Problems’ brings everything back to more familiar turf with some garage rock buoyancy. On this track, in particular, there’s more of a shift towards the rhythmic, with chopping guitar work being challenged by some great hi-hat work. …And with everything quickly disintegrating into fumbling soundclashes and feedback before a short and sharp finish, it gives an appropriate end to a short run of superb tracks.

Moving towards the close of the cassette, ‘Blah Blah Blah’ pulls some of the rougher elements of the bands sound back, allowing a hard a repetitive riff to take a dominant role. While a slower breakdown aims to push the tune in a different direction, it’s still one of the weaker efforts here, proving that aggression and volume cannot win out alone. From a solid beginning to a spectacular middle, this album crawls to a surprisingly indifferent end, as ‘Two Feet In Sludge’ presents some fairly ordinary noise-making and the self-explanatory ‘Lost Song’ is little more than a muddy demo. Padding out the release with a couple of remixes only seems to strengthen the feelings of a band losing focus, but let’s not forget how great this band sounded at the album’s genuine peak.

This is confrontational and sometimes challenging, but often brilliant. While Missiles of October strive so hard for originality, their core sounds remain familiar, but let’s face it, without descending into tuneless noise, so many of the art rock bases have already been more than covered. Whatever, the playing is passionate, the grooves are tough and when fully on form, the band presents themselves as a brilliant force. For fans of early Melvins, Jesus Lizard and a few other old curios from the Amphetamine Reptile label, at least the first two thirds of this release is highly recommended listening. …And if you like what you hear, make sure you check out the UK’s SuperLuxury and Cattle whilst you’re at it.