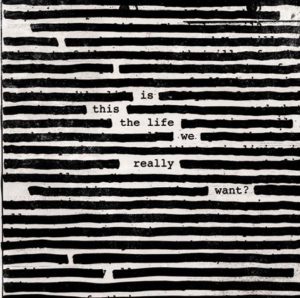 Roger Waters, ex-Pink Floyd bassist, songwriter and heavy-handed social commentator, released his third solo album, the rather grand ‘Amused To Death’ in 1992. A concept piece about media propaganda and news coverage, the album was one of the best sounding records of the year. It blended a few familiar Floydian motifs with the more atmospheric elements of his own ‘Pros & Cons of Hitch-Hiking’ and resulted in a cult classic. From then on, very little was heard from Waters with regard to studio material. It was perhaps wise to take some time out, of course, for to follow such a near-perfect record (at least for the style) would have been a fools errand.

2017’s pointed and politically charged ‘Is This The Life We Really Want’ comes some twelve years after Roger’s last recorded work (an opera, ‘Ca Ira’, a release only approached by the most faithful) and a staggering quarter of a century since the aforementioned ‘Amused To Death’. Most of the time between, he’s seemed content with sporadic touring and various live sets dominated by ‘The Wall’, a much-loved but somewhat over-rated concept album about mental instability caused by war-time trauma. The big question is, after such a long time away from the studio, is this album a cause for celebration?

If you’re happy to hear Waters stuck in a massive musical rut constantly stealing from himself, then very much so, yes – you’ll accept almost every note of this long-awaited return as some kind of musical gospel, a record so perfect you’ll shun all other opinions. If you, perhaps, dare to have broader musical tastes beyond a few prog icons whose glory days are decades ago, then this album will be rather hard to swallow.

Perhaps the biggest problem with ‘Is This The Life…’ is it’s wilful lack of imagination. Waters knows most of his audience will eat out of his hand whatever he chooses to do and so the album is over-reliant on the over-familiar. Sometimes familiarity is good, but this album is incredibly tired, dull and – frankly – bordering on tuneless with all of its best bits deliberately lifted from past resplendence.

These fundamental issues are evident from the outset, with ‘When We Were Young’ utilising various sampled voices of complaint. One voice is clearly Alan (of the Floyd’s ‘Psychedelic Breakfast’ fame), except this time, there’s more on his mind than marmalade or flakes to start his day. This leads neatly into ‘Deja Vu’, a number that fuses melodies from Floyd’s ‘Final Cut’ mope-fest with the general mood that cut through ‘Amused To Death’. Waters sings about being God (Ego? What ego?) and how if he were in charge things would be better, but the whole concept comes across like listening to an old man who’d be just as bitter about kids in his neighbourhood. A bigger problem is his obvious lack of voice; Waters was never the most gifted, but his voice at this point is little more than a husky mumble…and a brief attempt at hitting a big note results in a broken whine and one of the most embarrassing things you’ll hear from a supposedly classic artist in 2017. Meanwhile, the music ambles, getting ever closer to things you previously heard on ‘The Wall’ back in 1979. He complains that “the bankers get fat”, it’s all the fault of those who “lean to the left and vote to the right” and how that’s deja-vu, but the feeling of being somewhere before seems far more appropriate to his recycled arrangement than any hacked out political viewpoint.

‘The Last Refugee’ is a little better, placing a drum beat lifted from a 1972 Bowie classic against some sparsely arranged piano chords. There’s both warmth and heart to it’s simplicity, but any enjoyment starts to drain from it’s veins once Waters steps forth. Mumbling, wailing, growling, he presents himself as the worst kind of non-singer and any message he hopes to convey is quickly lost, mostly coming across as an empty whinge. The piano, meanwhile, has its Rick Wright esque heart pulped by some ugly synths weaving in and out where expensive strings would have sounded so much better. Any vague crescendo this number has – once again – sounds like a demo arrangement for Pink Floyd’s ‘Nobody Home’, leading to massive indifference. The album’s first extended piece, ‘Picture That’ shows Waters in a more spiteful mood, depicting wars and injustices on a global scale. He obviously feels by dropping the f-word into every other line it somehow makes it more urgent, but he just sounds like an aging, angry man unable to command any kind of eloquence. As for the musical backdrop, it’s pretty pedestrian. Fans will spot deliberate lifts from both ‘Welcome To The Machine’ and the faster moments of ‘Shine On You Crazy Diamond (Parts 6-9)’, only played as if the work of a cheap tribute band, proving further that Roger is a man happy to rest on his musical legacy. From herein, the album doesn’t really improve… ‘Broken Bones’ revisits Roger’s favourite topic, the after-effects of war, and although in 2017 such politicised topics and feelings are – sadly – as relevant as ever, listening to the opinions of a man in late middle age, strumming an acoustic guitar in the manner of yet another musical throwback to ‘The Wall’ is both predictable and fairly boring. Again, Waters attempts to counteract the sombre arrangement by injecting his own anger with bad language which, as before, doesn’t as much strengthen his message but make him sound like a man backed into a corner, lashing out bitterly.

Moving on, the title track starts in a thoughtful and moody manner, allowing Roger to throw out some pointed bass notes against a soft, rattling guitar. From initial promise, it doesn’t really go anywhere, though; the arrangement wanders in a similar fashion for what feels like an eternity. In a fraction under six minutes, this does less musically than most great bands are able to convey in less than half the time. Luckily, the lyric is a little better: rhetorical questions, all, asking if we actually want a life where the privileged become more privileged, a life where we fear foreigners or a life where “the president is a nincompoop”. We don’t, obviously, and he knows it, so in terms of a think piece it’s like shooting fish in a barrel, but you might – at last – feel he has a point, especially when it comes to a growing bigotry fuelled by the Daily Mail and a celebrity with no previous political experience who is now supposedly in charge of the most powerful nation in the world. Scary, scary stuff, indeed. At this point of the album, though, there’s an increasing feeling that Waters might have been better off handing these lyrics for someone else to sing.

‘Bird In A Gale’ finds Roger alternately shouting and whining against something that blatantly recycles bits of music from Pink Floyd’s ‘Animals’. It does so in a less tuneful way, where the biggest interest comes from a fleeting moment where it sounds like it could drop into the intro from the Bee Gees’ ‘Nights On Broadway’, while ‘The Most Beautiful Girl’ revisits the pleasing piano sound from ‘The Last Refugee’ and delivers it with a soft, waltzing edge. Waters, seemingly ignorant of any musical softness, cannot avoid the temptation to spoil the warm musical backdrop with a poor performance, the second half of which is no more than an ugly whine, hell bent on spoiling everything – or perhaps even jolting us awake. ‘Smell The Roses’ utilises the bass groove from Floyd’s ‘Echoes’ to provide the funky heart of the album’s only genuinely enjoyable tune. A shift into something more direct allows his band to work their rockier chops, where the interplay between a fuzzy electric guitar and Waters’s own bass provide the highlights. At the halfway mark, the great groove that’s been set up gives way to drones and electronica sounding more than reminiscent of ‘Welcome To The Machine’ and ‘Dogs’, before returning for a last belting groove. Waters stopped being pleasing vocally some time ago, but this track more than proves he still packs a hefty punch with the bass when he so desires. A genuinely new tune would have been preferable to yet more pilfering from the 70s, but at least this is an improvement.

The end of the album almost feels like we’ve come full circle, with ‘Wait For Her’ shifting the mood back to the Floyd/’Amused’ hybrid sound and not caring to do anything different with it (it almost feels like a lazy reprise of a couple of numbers), before a half-arsed ‘Pigs On The Wing’ rip-off blends into ‘Part of Me Died’, yet another number that sounds like something you’ve heard from Roger a hundred times. It’s better than most of ‘Is This The Life…’, to be fair, but there seems little point in listening to this until all copies of ‘Amused To Death’ succumb to a mass destruction of media – Fahrenheit 451 style – and we’re only left with this weaker relation as contraband.

This album contains several politicised messages, it’s true, but by the end of Roger’s 2017 opus, his bleating becomes almost unbearable, to the point where his anger and politics (mostly) just become a wash of whining dirges. Yes, we have a self-seeking celebrity in the Whitehouse; yes, the UK government is leaning further to the right, and yes, mainland Europe has seen an upturn in neo-Nazi activity, but attacks on these issues are blighted by a woeful lack of musical imagination and an ugly husk of a voice that’s not even a shadow of the acquired taste it once was. ‘Is This The Life We Really Want?’ was a long time in the making, especially for something so predictable. Waters is clearly stuck in a musical rut and it’s a shame that neither he or most of his fans see any point in moving on. This album is the poster child for massive, massive disappointment.