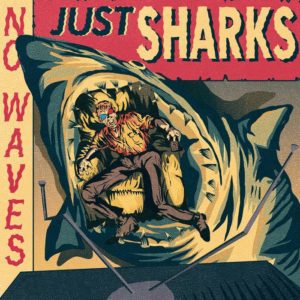 Three years on from ‘Snake Oil Superscience’, Brooklyn’s Mad Doctors mean business on their second full length ‘No Waves, Just Sharks’. On this album, the band truly exploit their b-movie and pulp fiction interests, not only in the artwork, but also by enlisting various friends to drop various spoken word passages between the tracks, giving the impression they’ve mined the vaults for unknown media samples. In some ways, this is better than using actual samples, in that the clips are tailor made and – perhaps, rather more importantly in this case – it also saves the band and label time and money on clearance rights. Fans of bands within the King Pizza stable might even recognise a few of the voices as belonging to Laura Gwynn and Riley Zeisig (Sirs&Madams) and the whole of label-mates The Rizzos.

Like it’s predecessor, this album gives the impression it was recorded for about $400 and sounds all the better for that. An intro unapologetically announcing the band’s arrival kicks off the fast ‘n’ furious listen and then leads seamlessly into ‘The Ballad of Jort Dad’, a number that really captures the essence of previous Mad Doctors releases, but if anything makes the band sound tougher and tighter. Tighter maybe, but fear not, they’ve lost none of their grubbiness; no attempt has been made to make the material any more commercial. Between the buzzing garage riffs and a slower almost grinding tune to play out, it has a little of everything you’ve come to expect – and yes, vocalist Dr. Seth still sounds like he’s shouting into a bucket at the end of a long tunnel. ‘Lord of Garbage’ proudly proclaims it’s own welcome to “a land of filth” and comes with a Stooges inspired riff to match. The vocals are more distorted than ever; the bass is fat and fuzzy, and yet there’s a really catchy melody forcing its way through the fug. This is in no small way thanks to The Rizzos‘ Megan who drops by for some sweet “oohs”, her voice bringing just the thing needed for the track to teeter between rawk and melody. Shameless rock ‘n’ roll noises rarely sounded so good.

On tracks like ‘The Rats Are Coming’, the lo-fi no frills sound boosts the marriage of guitars and bass to the point where they’re almost indistinguishable from each other. Song-wise, this could be a career best for The Mad Doctors, as it comes with a superb riff that strikes a perfect balance between raucous rock and hard-nosed garage blues. Dr. Seth cranks a tough sound via his six stringer, abetted by the bass adding extra fuzz, while everything is held together by Dr. Gregory behind the kit. It mightn’t break new ground musically for those who happen to be familiar with the debut, but if definitely does a smarter job. ‘Springwater Supper Wizard’ brings lo-fi joys to a surf rock vibe, with Seth adopting a loud vocal croon against a buzzing riff that suggests a debauched slacker mood. The lyrics aren’t always clear but the tune speaks for itself, coming across like the early Misfits jamming with Vamanos. It quickly asserts itself as an album highlight, thanks to a devil-may-care attitude and tough rhythm, but it’s the addition of a careening lead break that truly captures a great deal of the Docs’ basic musical needs. Released as a digital single ahead of the album, ‘Justin’s a Cop’ taps into a bouncier style than most of the Docs’ wares, highlighting a great bass line beneath the usual echo and reverb. It’s a touch more commercial due to a selection of beats that seems to accentuate a handclap style; it also comes with a very pleasing riff, so it was certainly the right track to put out there in advance. In terms of straight up garage rockers it hits that sweet spot, but in terms of general madness, the band have gone deeper elsewhere on this record.

A late 50s/early sixties twang provides the bulk of the sinister ‘Dead Beach’, with the Doctors exploiting more surf rock on the kind of budget that makes Mudhoney’s Glitterhouse recordings sound as glossy as McCartney, before Coach N Commando’s Matt Witte steps up for a guest appearance on ‘Shit Hawks At Blood Beach’, a dark spoken word affair that showcases a great bassline from Dr. Josh, topped by a Ventures inspired twangy guitar. The driving garage rock might take a backseat here, but the choice of vocal and moody musical backdrop ensure it’s every bit as intense as the best Mad Docs’ work. If anything, it’s a real pleasure to hear them exploring new musical waves. Meanwhile, those looking for full scale, high octane garage rock will certainly find a new favourite in ‘She’s a Psycho’, a tune that forges ahead with a fuzz bass and some finely chosen surf guitars. Like a mangled jam between The Hives, Black Lips and The Frights, it comes close to perfecting the hybrid sound the band have always craved. The balance between rawness, speed and melody is impeccably judged and – naturally – when played loudly, it sounds even better.

Cranking the speed and opting for another Hives-esque, crashy workout, ‘Mind Rot’ distils the Docs’ core sound to it’s purest essence, delivering a bouncing riff that has barbed edges and a distorto-vocal that cares not for perfection. Better yet, ‘Dial M (For Sultry)’ takes most of that garage rock and melds it to a deeper riff, a blues-edged fuzztone that could be on loan from label-mates Sun Voyager. While the band’s trademark mix of sharp riffs and echoing vocals comes in full force, it’s when reaching the instrumental climax that this number reaches peak frenzy. A fuzzy guitar and bass recall the earliest Melvins, but the Doctors avoid all temptation to move towards the more obviously sludgy by keeping speed as the essence.

‘No Waves, Just Sharks’ is a record with some serious teeth (pun very much intended). In approximately half an hour and ten songs, these three guys – with help from assorted friends – surf up an ugly storm. If you liked ‘Snake Oil Superscience‘, you’ll love this. With plenty of high octane riffs and even more distortion, this is an exciting record to say the least; a great example of how money and corporate assistance is really no substitute for guts and enthusiasm. Highly recommended.