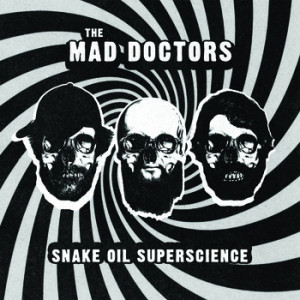 Brooklyn space-psych rockers The Mad Doctors released their EP ‘Fuzz Tonic!’ via Doctor Gone Records in the spring of 2013;  its five echo drenched numbers gave an insight into their hybrid sound of garage rock/hard psych and surf music, but its limited recording budget hampered listening enjoyment to a degree.   A year on, their first full-length ‘Snake Oil Superscience’ shows a great improvement.

Sure, the tunes are still raw, but everything comes with a broader sound, a sound that – perhaps most importantly – really pushes the licks from guitarist Dr. Seth to the fore. On this second batch of tunes, it really doesn’t take long before the Docs trippy grooves take hold and make the prospective listener want to lurch about, infected by the energy that bristles with each chord. ‘Space Woman’ pretty much sums up the band’s sound.  There are old sci-fi samples, a flirtation with surf guitar and rattling beats…and all within a brief intro.  As the tune gathers pace, the beats are hard, reliant on British Invasion grooves from the mid 60s, but this is no mere tribute to those times (as per the straight-up Beat Rats); there are bigger tributes the sounds of ’Frisco and the US North West here.  …And once the Brooklyn quartet douses everything in reverb, thus giving everything an otherworldly echo that owes as much to the early Dead and bands like The Monks, the American slant on their sound is very obvious.  All the better for it too – the lead vocals, although subjected to treatment are so obviously American, each word having an echoed drawl not far removed from the young Dave Wyndorf.   Factor in a well played lead guitar break with a screamer of a tone and The Docs come out winning.

‘Slug Shake Armageddon’ opens with a bass riff courtesy of Dr. Josh, bringing all of your four stringed needs, before settling into a drum heavy, psych ‘n’ surfer, with plenty of twang, like The Ventures on an even lower budget.  The lead guitars eventually bring a dirtier tone and all round bluesier finish where the riffs (unintentionally) recycle parts of the Blind Faith classic ‘Had To Cry Today’.  Having the task of linking these two styles, Seth’s confident vocal performance lends itself excellently – an easily discernible melody, trashiness and an old-school charm, ‘Armageddon’ is almost your handy guide to all things Mad Doctors in a three minute soundbite.  ‘Transmission Impossible’ swaggers with a sneering vocal and a tough riff, before being made even better by a few deep echoing surf twangs and a faultless bass solo, while ‘Surfboard From Hell’ shows a strong humour from the outset, mixing surf guitar ‘n’ reverb with the kind of slow doomy riff that informed the late 60s proto-metal sound.  Picking up the pace, this number eventually shows great surf rock credentials, the sharp twang and Dr. Greg’s drum rattles placing the band in the mantle of an evil Dick Dale…and they’ll have fun, fun, fun until daddy takes the hard liquor away.

‘Braindead Boogie’ takes a side step into the kind of garage rock that fills their label-mates Greasy Hearts greasy cassettes (although played a mite faster) and as such has fewer layers than some of this material, but a great riff and forceful vocal make it more than hold its own. ‘Let Me In’ fuses surf rock with the kind of gonzoid edginess that sets this band apart from many other garage rock champions; a simple 50s riff driven into your skull via a Ramones-eque speed with Greg’s drumming technique really comes into its own before ‘Boogeyman’ brings more fierce fun during a celebration of all-things of a low-grade horror persuasion.  Dressed in so much reverb it’s almost impossible to ascertain any of the lyrics.   Each of these tunes feels like they compliment each other: speed, attitude and a retro cool absolutely essential to making them stand.  It’s only really with the brooding ‘Swamp Taco’ that eyebrows are raised in receipt of the unexpected.  A fractured bassline brings a hefty parp due to the lo-fi recording – a slow and methodical beat all the while allowing Josh room to stretch out, a decision he seems slow to take.   Beyond this, the guitars are sludgy and discordant, the drums hard but simple; the zing missing from the more surf-oriented tunes glaringly obvious.  It’s not all at a loss, however, another bluesy lead guitar provides interest in the middle, underneath which the bass dances its way across the more complex before the trio briefly explode into a world of noise.   While this tune is pivotal in showing a broader range of the Mad Doctors’ talents, it’s really not their best tune – they’re much better when they’re approaching a full-on r ‘n’ r frenzy.

‘Swamp Taco’ misses the mark a little, but the bulk of ‘Snake Oil’ represents a DIY distort-o-rama that’s a must-hear.  This is pure rock ‘n’ roll, motherfuckers; rock ‘n’ roll brought from the underground  by The Monks and The Sonics in the mid 60s, shaken, twisted, chewed and regurgitated, then recorded with the kind of Guided By Voices styled naivety that just allows it to sound more alive than ever.  You want it, you need it –  unless, of course, you hate garage rock and freakbeat sounds, in which case, you’ll really hate it.  One thing’s for certain, it has an contagious energy – with ‘Snake Oil Superscience’, The Mad Doctors are more than ready to take on all comers for the DIY garage rock crown.