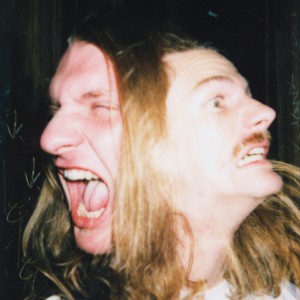 In 2014, as one of the first batch of releases issued by cassette specialists King Pizza Records, Brooklyn’s ¡Vamanos! dropped a handful of tracks that truly set the pace with regard to two-man garage blues noise-making. The five tracks demonstrated a powerhouse performance, culminating with perhaps the filthiest rendition of ‘Death Letter’ committed to tape. The live shows, of course, were even more intense – “disgusting”, even, to quote their label boss. At the beginning of 2016, Alex (g/v) and Tyler (d/v) returned to Danny Rose’s studio – the location of prior recordings – to try and capture an even rawer and more intense representation of the band.

If you thought the debut cassette was dirty, prepare to have your ears destroyed by this 10” release! The opening track – little more than a warm up – shows the duo in a frightening confrontational mood. As ‘Mersch Bag’ begins, the sound of Alex’s strings is so mangled you’d swear he was cranking a distorted bass and, even once things have found their niche a few seconds later, the potential for hurt is high. As the track grumbles along, Tyler’s drums lend a solid groove behind the ugly noises; and as things change key briefly – and then back again – it’s clear that, although everything is utterly fuzzed out, there’s a superb bluesy sound at the heart of it all. Dropping to a slow grind to finish, it almost feels as if the pair are about to embark on an impromptu rendition of Black Sabbath‘s cover of Aynsley Dunbar’s ‘Warning’; not so, of course, and the change in mood merely signifies the move into ‘Necktie’ – a high energy garage rocker topped by unrestrained vocals. A little more like the ¡Vamanos! of old, these two minutes are all speed and bluster, often showing Tyler to be a superb if unfussy drummer. The cymbals fly, the vocals yelp and the results are among the purest garage rock sounds you’ll hear. With the addition a couple of truly ugly guitar leads to boot, it’s already a great track, while the unexpected use of stops shows all the more how ¡Vamanos! – while often tapping into familiar sounds – aren’t necessarily going to play by the rules.

Bringing a much bluesier tone to the fore, then smashing that into some fairly uncompromising rhythmic chugging, ‘Beat’ sounds like a twisted cousin to ‘Low Speed Car Chase’, with each bar showcasing Alex’s array of distorted effects, before ‘Chicken & Waffles’ finds a space that sounds like a ferocious rock ‘n’ roll band churning a fiery lead. ¡Vamanos! may just sound like they’re somewhere down the end of a corridor sonically, but there’s no denying their energy…and by the time Alex hits a couple of mangled lead breaks, you’ll fear for the future of his six strings – they are being pushed to the utter limit. Showing no sign of giving their audience respite, ‘Dreaming’ continues apace with more threatening guitar sounds, against which the drums bustle with an almost relentless glee. A hooky melody tries its best to counterbalance the sheer bluster and comes as somewhat of a surprise, but the end results have a vocal so distorted that any melodies soon get crushed under Danny Rose’s no-nonsense (almost non-)production. In and out in under two minutes, there’s no filler, no messing and absolutely no compromise. You think Royal Blood represent the best in cobweb clearing duo noise? You’re wrong; so very wrong and quite frankly hopelessly naive. Last up, things stretch out on the pounding Jackie O., a tune that pushes Tyler’s drumming to the fore and has a speed and general drive that provokes much jumping up and down. The extended playing time isn’t so much a vehicle for the duo to go crazy with feedback – as expected – but rather more a way to capitalise on a great chorus. The main hook, as with ‘Dreaming’, is far more important than any noise ¡Vamanos! care to make (and as usual, there’s a lot); this ode to the radio manages to grab the ear from first listen.

As filthy as the beer coloured vinyl upon which these tracks are pressed, these tunes are a must hear. Never easy listening, but always thrilling and with two sweaty, hairy bastards bringing distortion, anger, more distortion and a sound that makes Jack Endino’s studio techniques sound like Jim Steinman, for genre fans, this 10” is the dogs’ bollocks. ¡Vamanos! are set to make heads explode – and while their uncompromising sounds won’t necessarily win them new fans, if their grubbiness moves you, don’t fight it. You will not win.