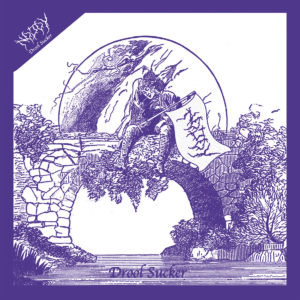 The three tracks that make up the 2016 EP ‘Drool Sucker’ are by turns brutal, ethereal, jangling and even touch upon a no-wave distort-o-rama. As before, they’re all very much sounds you’ll either love or loathe. Almost like a short, ready made snapshot of the frustrations and eventual disfigured beauty that fires this four piece, it should be a great primer for those unfamiliar with the band’s work. However, the opening track ‘A Thorn In Garland’s Side’, in particular, guarantees this is no easy ride. From the opening ringing of a telephone accompanied by a live in the studio drum, there’s a gut feeling it’s going to be big – and as everyone explodes into several bars of distorted noise sounding like A Place To Bury Strangers jamming with Sonic Youth, it is – very big. Then from within the chaos, a strangely enjoyable song emerges: the guitars retreat to a 90s indie jangle; heavily treated vocals recall the sounds of the best 4AD dream pop and the band are very much off and running. It may not be as complex as they’ve been in the past, but the of-the-moment recording is a reasonable example of the No Joy core sound. Clean guitars add extra layers of sound and at the point things begin to feel a touch claustrophobic, the sheet noise returns. This second time around, though, the noise feels different somehow; not necessarily more accessible, but reinforcing the extreme shoegaze, there’s a black metal coldness. It’s intense, to say the least, almost drowning the listener in sound. That feels like a natural end, but No Joy wring the neck of the track and, to finish, squeeze out a quiet, almost blues noodle to counteract the noise. There are elements of at least four different songs here – but that’s par for the course.

‘XO (Adam’s Getting Married)’ is another odd mish-mash, beginning like the most crushing elements of Sebadoh channelling a post rock band, before descending into a slow, crawling verse that couples an echoing dream pop vocal with a heavy, cold and confrontational doom riff. The chorus shifts into the more upbeat, as elements of ‘King’-era Belly bloody the nose of Chapterhouse, whilst being drowned in a vat of distortion that sounds if it were served up by ex-Flaming Lips guitarist Ronald Jones. As the creeping last verse pummels its way across the finish line, the shoegaze angle is amplified and a repetitive lyric – almost inaudible, of course – provides something of a hook. With a perfect balance between the emotionally destroying and bizarrely uplifting, each play of this track is as good as the first. Finally, tapping into something more melodic, ‘Theme Song’ (again, an obtuse viewpoint prevents them from telling us any more), loses some of the drone elements and pushes forth the welcoming dream pop. Naturally, this isn’t dream pop as most have come to define it – it’s more of a dystopia inflected slumber, a soundtrack of sweaty restlessness – but all the same, it’s sparkly and almost frothy compared to what’s gone before. Elements of Throwing Muses tease; a huge amount of Pains of Being Pure At Heart sits at the core of the pop shimmer; a huge shoegaze echo is employed. As is tradition, the vocals glisten with an ethereal cool but aren’t always necessarily clear, while a superbly flat drum sound really impresses. Overall, the tune holds a great presence, with the 90s styled music capturing a wonderful feeling of nostalgia…and yet still maintaining a sense of relevance at the time of recording. For listeners whom continue to love dream pop and shoegaze within their many guises, hearing this is a must since this is gold standard No Joy and – without question – the EP’s best track.

‘Theme Song’ perhaps represents No Joy’s more obvious melodic root and is a great representation of how the band sounds when on form (and is worth seeking out, obviously), while the other tracks require patience and are much more cerebral. Not necessarily weaker or worse, but as proven by ‘XO’, time and patience are their own reward.

Although too short, ‘Drool Sucker’ is a worthy addition to the band’s catalogue. It’s No Joy doing what they do best and for the many pairs of uninitiated ears around the globe, just one hearing could open up a body of work that could baffle as well as beguile… Dive in.