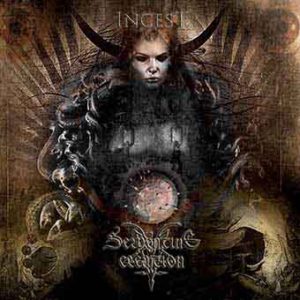 Bulgaria’s Serpentine Creation are one of those extreme metal bands whom seem to become more assured with every release. While they’ve not necessarily become any more melodic, it is easy to hear how their music has become grander with the passing of time. Their 2012 debut album ‘Dystopia’ featured some fairly straight black metal, played quite well but let down by budgetary constraints. Three years on, ‘The Fiery Winds of Armageddon’ was afforded a bigger send-off, with clearer separation between the instruments. The band showing a broader musical palate on those tracks, too, with some great solos and twin lead sounds to balance out the heavy pneumatics. More than just a stop-gap, 2016’s ‘Incest’ not only continues from where the previous recordings left off, but also introduces more new ideas.

The title track begins with a busy but atmospheric organ, like the re-imagining of a 1940s horror overture played at double time – far closer to goth than any black or death metal. From that very second there’s hope that Serpentine Creation will have an interest in thoughtful arrangements as opposed to taking the easier route of merely just thrashing out a speedy, heavy riff. And that is very much the case with this opening track, as black metal guitars then come forth with a coldness, before bass and a hefty mechanised drum lend a style that sounds like a black metal band remixed by KMFDM. Unexpected, but true – ‘Incest’ (the track) sounds like an almost unchartered land of extreme metal and industrial dance sounds. The music is of the greater interest, with the organ still retaining a reasonable presence; the busy and heavy electronica also has a somewhat theatrical flair. Naturally, the frontman hisses and growls and it shouldn’t work as well as it does, but fair play to the band for succeeding.

‘Funeral, Swords & Souls’ moves towards the more obvious, with guitars shredding a cold melody that sits squarely between black metal and extreme folk metal. The introduction of the vocal – shifting between a black metal rasp and death grunt – pushes everything into the extreme bracket, but musically speaking Serpentine Creation hold firm when it comes to a tune, as there are extensive passages that drop the pneumatics in favour of old-school metal riffery. Of particular note during this number is the instrumental break, including pseudo Gregorian chanting in place of the expected solo. While the shrill guitar work from the intro makes a return visit for the closing part of the track – the least enjoyable part of this workout – there’s enough here to please many fans of exteme metal at points between, showing that by this stage in their career Serpentine have mastered the art of a well balanced arrangement.

With a chunky mid-pace led by a tough bassline and melodic metal guitar, ‘The Wolfpack’ draws influence from middle period Cradle of Filth and the havier elements of Paradise Lost, while vocally sticking with a tried and trusted growl. More so than ever before, partly down to the slower pace, this number has a very epic, almost theatrical feel. Some listeners will find the extended instrumental sections a treat, as they introduce almost gothic, bell-like percussion sounds and a terrific bass that occasionally cuts its way through the main riff. This is the EP’s best track not only for the brilliantly dominant riff but for also managing to draw in the listener with a distinctive approach to the vocal. The voice won’t appeal to anyone who’d instinctively look for clean singing, but the blending of voice and instrumentation to drive the main melody is spot on for the chosen style. The EP is rounded out by the religion-baiting ‘God Is Crying’, a cold instrumental that brings out the best in the guitarists’ talents lurching between a slow, neo-gothic riff and a rattling riff that sounds like a slower Slayer workout circa 1990. There are only two melodies at play and the band constantly teases between them; there’s no flashiness, no featured lead break and no shredding. This is metal stripped back to its bare essence – and while a cracking solo might’ve been very welcome, this track stands up well as it is.

Despite the off-putting title, these four tracks have a definite extreme metal appeal. The extreme elements manage to be harsh, yet the songs have elements that draw from just enough other sources to ensure this isn’t just “yet another black metal disc from Eastern Europe”. For those looking for a twist to their usual listening fare, Serpentine Creation will definitely deliver the goods on this disc. Be warned, though – ‘Incest’ isn’t one for the purists.