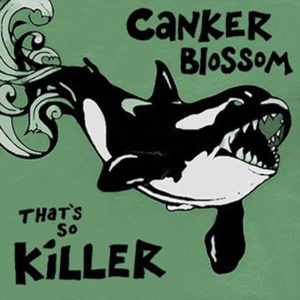 The three piece start with best intentions, though, as the riff from the opening track of this second album proves. Musically, ‘Animal Face’ has gusto…and plenty of it. The guitar tones are crisp; the bass, although low in the mix, shows a toughness and some of Alicia Passmore’s vocals have enough spirit to be up to the job. Despite best first impressions, though, and despite not even clocking two minutes, this track seems to run our of steam somewhere around the halfway mark with the constant repetition of the title in an unappealing fashion. ‘Freedom’ kicks off with a strong melody and one of the best bass sounds ever (Josiah Watts is clearly a killer player, often trapped within material that doesn’t allow him to reach these heights too often). There’s another good riff and the vocals have a flippant and slightly yelpy edge that typifies the youth of classic punk. That really escalates by the chorus rolls around as Alicia just cuts loose. Perhaps too loose…an unrestrained wail with a punk attitude will either thrill or annoy… As the disc progresses, it becomes clear that Passmore only has two vocal styles – one occasionally calls Shannon from The Messengers to mind and the other is a half-arsed drawl that makes Kim Shattuck of The Muffs sound like Marcella Detroit. This hampers some of the material; as does the song writing which, it has to be said, is a little unfocussed.

‘Bay’ goes all out for melody and has a pleasing riff and an even better drum part but is seldom sounds like more than a third rate version of The Messengers, while ‘Circles’ bravely attempts to lift the spirits by throwing in a deep rattling bass and occasional unexpected chord, only to be weighed down by an uninspiring vocal and a non-event of a chorus. ‘Satan’, meanwhile, has a chorus based around a cheerleading chant which wears very thin, very quickly indeed. This is a pity, as this number is musically okay. It introduces a drum part that’s a dead ringer for ‘Teenage Labotomy’ (though played slightly slower) before kicking into a riff that’s very familiar punk-pop fare. The band knows this hits the right buttons, musically speaking. It’s a pity, then, that they really milk this, working a desperately similar riff for six other tracks among the record’s fourteen tunes.

Hitting a new low, there’s ‘Spaz’: Dear America…stop using this word as a flippant insult. It’s not funny; in fact, it’s horribly offensive to specific groups, very much in the same way as the n-word, which, of course, you’d never dream of using as an insult in a punk song ever. Aside from it’s potential offensiveness, this track wastes a chunky riff on a sagging vocal that makes Alicia sound half asleep. In all, it’s a horrible song that’s sounds like something scraped from an early Green Day demo – something that, at best, resembles a really badly played ‘When I Come Around’. The acoustic ‘Jealous Cake’, meanwhile, never rises above sounding like an Even In Blackouts cast-off, is overlong at something nearing three and a half minutes, while the stripped back music doesn’t necessary show any of the band’s best strengths. Actually, it’s quite boring to listen to – it’ll likely have the detrimental effect of making you skip the rest of this LP and choosing to play Even In Blackouts instead…which would be a wise move.

So aside from a couple of solid riffs and a superb bass part on ‘Freedom’, is there anything to lift this long player out of the doldrums? Actually, yes – Canker Blossom bring a few lightning fast belters between the all-too-many misfires. ‘Toby The Drunk’ – a track that’s closer to Screeching Weasel than the more bubblegum Ramones – is superb and shows that the band have some genuine teeth, as Alicia hammers a wrist-breaking rhythm guitar riff while yelping her vocal with a real intent. ‘Go Fuck Yourself’ is as sharp as a bed of tacks and owes more than a small debt to The Nobodys in terms of guts and a fist-in-face attitude, while the similarly aggressive ‘Fishing For Likes’ thrashes like Green Day’s ‘Jaded’ with a superb bassline and chucks a pounding and almost metallic rhythm between the verses for good measure. Canker Blossom definitely improve during the few tracks that go for maximum speed, since his allows all three musicians to really thrash out their punky riffage – and they’re good players when they put their minds to it – and in the fastest of scenarios, the vocals, too, appear a much better fit.

Very much a case of “tries hard, but doesn’t really reach full potential”, ‘That’s So Killer’ doesn’t even have the benefit of being unintentionally funny. It’s one of those discs which proves the Ramones blueprint seems easy to replicate, but it’s harder to actually nail with any kind of style. It needs great hooks…and that’s something often missing here. In all honesty, for the few decent tracks you’ll find here, your time would be far better spent on any number of other releases, especially since there are literally hundreds of DIY punk releases hitting the market on a monthly basis.