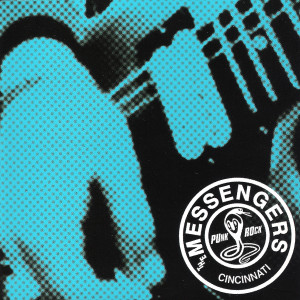 With a sound that closely mirrors Spanish punkers Aerobitch, with its sheer energy ‘Murder’ rattles along apace, with guitarist Don keen to exploit just one chord as the verse’s tune basis, but this thrashy care-free approach works just fantastically.   Taking that energy and putting it to better use, ‘I’m Not Lost’ intercuts the thrashiness with a greater confidence.  A strong chorus – pulling a infectious hook from just two lines – is bolstered by some fantastic muted guitar strings adding extra edge, while throughout the entire number, vocalist Shannon taps into something worthy of her predecessors, most notably Cinder Block of Tilt fame.  Don’s scratchy guitar part gets an even bigger airing as he launches into a rockabilly-inspired guitar solo, the intro of which features him scraping the hell out of the strings.  Throw in a few stops too and it’s just awesome…simply awesome.

Tapping into their more commercial side, ‘American Slob’ sets the pace with some sharp and clean staccato riffing, over which the lead vocal sounds truly enthused, with Shannon’s delivery rising and falling over the Bryan’s bouncy bass riffs.  With such a fun and accessible sound, not even the inclusion of a recklessly out of tune backing vocal manages to spoil the good work laid down elsewhere. ‘It’s Up To You’ is pop punk inspired by The Queers and Screeching Weasel – with the latter’s influence as subtle as a ten ton hammer via the lead guitar riff that opens the tune.  The chords are trashy, the gang vocals are street punk in style and the bass – suitably cranked – ratthles along nicely throughout.  In keeping with The Messengers’ rough yet commercial sound, Shannon’s lead voice wobbles a little as if all vocals were completed in one take.  This, naturally, just adds to the charm.  Elsewhere, ‘Fight The Rich’ combines the oft-heard bass rattle with some disjointed chords which, at first, owe more to the noisier end of power pop and proto-punk (The Real Kids et al).  With a slightly unsure sound, the vocals too aren’t especially forthright…but then, the magic happens and the whole band crash into two minutes of great sounding pop punk – an anthemic chorus with whoas aplenty and the kind of energy that typically carries off the rest of this LP. The Messengers’ typical formula – three parts Tilt, one part Weasel, may not be too original (but, hey, very little punk stuff actually is), but there’s no denying how well it works for them.

With most of the material being first rate, ‘Lost Cause’ at first sounds as if it’s about to buck that trend, with the guitars adopting a gentle riff and the lead vocal being rather off key.  At the point you realise that slow material just isn’t going to be The Messengers’ forte, it’s as if they realise it too – and with that, kick into high gear, with all drums thrashing, guitar riffing, bass rattling abandon.  The rest of the number shows the band at their best, the high octane punk ethic pulling sounds that are, again, strongly comparable with Tilt.  A few of the vocals are a touch…er…wayward, yes, but in terms of hooks and accessibility, The Messengers have plenty to give.  Among the album’s best material, ‘Blame’ pushes The Messengers punk ethic into a slightly punk ‘n’ roll territory, something especially notable due to the favouring of a much fuller – even slightly retro – sound over the usual staccato stuff.   With plenty of gang vocals, this is delivered with serious ’tude, showing yet another facet of this talented band’s musical arsenal. As one of the disc’s most enjoyable tracks, it seems a pity that clocking in at just 1:17, it’s all over at least thirty seconds too soon.

While this record did not gather much press attention at the time of release, make no mistake, it’s an absolute belter. Although the overall sound may be derivative of many punk outfits you’ve heard before – with early Tilt being the most obvious and recurring influence – that doesn’t make any of the material any less enjoyable.  In fact, with such a strong tried and tested musical blueprint, it just couldn’t fail. As the missing link between Tilt and City Mouse, The Messengers should be listened to at the earliest opportunity.  For those who’ve long supported similar bands on labels such as Fat Wreck or Epitaph, this disc has potential to become a firm favourite.

[The whole album can be streamed below.]