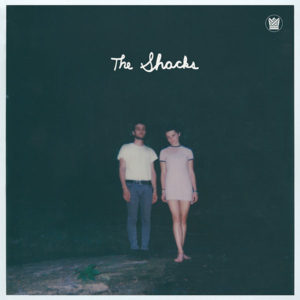 The EP’s lead single ‘Audrey Hepburn’ is a great example of how Shrager’s fascination with a musical past and various kitsch influences meshes well with Wise’s voice. The music works a soft and dreamy malady at first, with occasional piano notes drifting against a bassline and synthesized strings. The sound is that of the gentler Morcheeba shorn of drum loops coupled with the wistful vocal of a post-modern pop. As the track builds, Wise settles into her stride and her hushed tones almost become as important as the music itself …And then the chorus comes out of nowhere; using the rag-bag of influences as heard on his solo EP, Shrager ushers in a rattling and militaristic drum beat, as if dropping the listener mid-way into a totally different track. The loud rhythms take over completely, but once you’ve got over that initial shock, the multi-tracked oohs, marching drums and 60s guitar sounds meet in a way that’s rather entertaining. With a constant push and pull between these two styles, ‘Audrey Hepburn’ is constantly fascinating. A little smoother and totally centring around the retro musical slant, ‘This Strange Effect’ presents itself as a twenty-first century equivalent of 50s easy listening fare. The tango-ish rhythms bring out the finest in twangy guitar sounds when set against such a solid rhythm, while clean bass work holds everything together. With hints of Farfisa organ, there’s no denying the kitsch value, but a tougher guitar sound breaking through at the close lifts things admirably. Although not so concerned with electronica, this track is an obvious bedfellow with The Bird & The Bee’s best work.

An excellent example of twee pop, ‘Rain’ features whirring keys which give the effect of a stretched backing tape. Rather than being off-putting, this slightly jarring sound seems very much in sympathy with the steady rhythm and a quiet voice, while occasional guitar chords push past the spacious arrangement. With a smoother chorus featuring multi-layered “doo doos” and a pleasing melody augmented by thin twangy guitar, this is The Shacks’ finest two and a half minutes.

Like so many bands crossing genres, though, they aren’t always great. ‘Left It With The Moon’ is actually rather nasty, mixing sounds from 50s calypso and kitsch pop on almost lullaby inspired tune. Wise’s voice – here, unashamedly wispy and child-like – hits higher registers in a way that just doesn’t equal the band at their best – or, indeed, even resemble anything you’d want to hear more than once…and possibly then only by accident. ‘Tidal Waves’ makes up for that with a sparse arrangement featuring prominent acoustic strums at first – almost ukulele-like – before blossoming into a groovy sixties throwback where a steady rhythm places a modern 90s sensibility over a tune with a very old soul. Like the coming together of Black Box Recorder and the less dance oriented experiments of Saint Etienne, the pure pop feel of this number strikes gold. Wise’s vocal exudes innocence and Shrager’s love for a sixties guitar really gives the arrangement a lift. It’s no ‘Hobart Paving’, but in terms of kitsch driven pop, it’s one of the finest things you’ll hear. It doesn’t make it easy to forgive ‘Left With The Moon’, but those with a curious ear should definitely make this their first port of call when hearing The Shacks for the very first time.

Also released as a download single, ‘Orchids’ taps into something with a bit more drive – although being The Shacks, it’s still very lightweight. Instead of dropping straight into light pop, this number has a rousing intro that’s closer to a thirties horror movie sting than any kind of retro groove. Soon enough, though, Shrager ensures the tune comes forth and the slow almost bluesy feel is particularly fine. The mid-pace allows plenty of space for embellishment: his guitar lends a heavy twang, the bass pumps admirably and a baritone sax drops in and out as if it doesn’t quite know its true place. Given the band’s penchant for the quiet, the intermittent wheezing is very much deliberate, as to not upstage Wise and her usual understated approach to…well, pretty much everything. As the number moves on, so too does the pace – almost seeming like an afterthought, old-school keyboards add something of a ska edge, before the whole band launches into another bouncing 50s calypso freakout. It isn’t as enjoyable as the number’s formative melody but, all things considered, this is a varied and deceptively clever arrangement.

Musically, it might be this EP’s most simple offering, but the straight ahead pop reggae of ‘Hands In Your Pockets’ has plenty of scope for showcasing Wise’s voice. It’s multi-tracked, but all the same rarely manages to rise above a woozy and lazily lustful mumble. Much as before, of course, that’s where its main appeal lies. Musically, it’s one of the toughest Shacks jams, although tough is very much a relative concept. The bass holds firm; the clean toned guitar stretches beyond bar chords to add a very late 50s inflected solo, while a retro organ pumps out chords in the manner of Jerry Dammers amid the Specials classic ‘Ghost Town’. Everything combined, it does all that is necessary for such a reggae tune to stand – and it’s nice to hear it done without the kind of smug self-knowing attitude that can pervade such a track (see Black Box Recorder’s cover of ‘Uptown Top Ranking’).

‘Left It With The Moon’ aside, this EP is a very enjoyable listen. It’s often hard to pin down why exactly, since the music shifts from alt-pop to downtempo electronica, to calypso, sixties twee and back again, but presenting themselves akin to a less focused Bird & The Bee with a Keren Ann fixation kind of serves The Shacks well. It might not be the kind of release you’ll reach for too often, but when the mood fits, it’ll scratch that kitschy itch for sure.