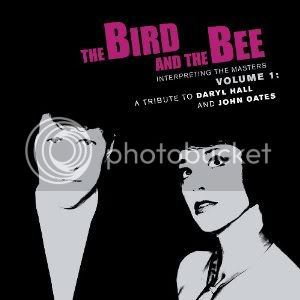 Signed to the Metro Blue imprint of the legendary Blue Note label, The Bird And The Bee is a electronic pop duo comprising of Greg Kurstin and Inara George (daughter of Little Feat legend Lowell George).

The first couple of albums by the duo are fine as far as electronic based pop is concerned, but every once in a while, something comes along which you’re not expecting. Such is the case with The Bird And The Bee’s third release, ‘Interpreting The Masters, Vol. 1: A Tribute to Daryl Hall and John Oates’. It doesn’t really need to be said, but for years now Hall and Oates have been considered very uncool and it’s possible that, had any other electronic duo tackled this, it’d be with “ironic” smiles on their faces. However, given Inara’s parentage, there’s a fair chance this is done with a love of the original tunes – it’s even likely her father knew the velvety voiced one and his moustachioed companion. The end result is a mixed bag, but often interesting listening for those with more than a passing interest in Hall & Oates. There are a few excellent covers here, alongside some okay ones and, thankfully, nothing comes out terribly.

Firstly, why they bothered covering ‘Maneater’ and ‘I Can’t Go For That’ is the biggest mystery surrounding this release. The Bird & The Bee are a talented pair and it’s probable they could have put more of their own stamp on this pair of eighties tunes.  However, they choose to play things as straight as they can: ‘Maneater’, in particular, even sounds like it’s been created from the same drum loop… Inara’s voice is fine, but aside from a couple of interesting keyboard sounds, compared to some of the other stuff featured on this release, this is very workmanlike, despite a cameo vocal from Garbage’s Shirley Manson. Similarly, ‘I Can’t Go For That’ utilises a few unnecessarily harsh keyboard sounds as well as a few fills borrowed from 80s soul-pop. While Inara’s voice here is enjoyable, there’s something uninventive about the end result.‘Kiss On My List’ is a little better – that’s mainly due, once again, to Inara George’s performance. This is a decent cover, even though the stabbing keyboards which drive the original are completely absent and the closing guitar part has been replaced with a really nasty keyboard solo.

The best of the bunch here are the takes on the 70s Hall and Oates material, and arguably being better songs from the outset, so too are The Bird & The Bee’s take on them. The electronic nature of The Bird And The Bee’s music means that a couple of these have been given a proper re-imagining. ‘Sara Smile’ features Inara at her vocal best, a smooth voice which really pulls in the listener. Musically, the drum beat gives the song a good amount of depth, but never quite drops into full trip-hop mode. The classic ‘Rich Girl’ begins with noises which sound like they’re created for a children’s song, while the main thrust comes from a pre-programmed loop which is pure Casiotone. The hand-claps are a little unnecessary and some of the arrangement could’ve been a little more subtle, but somehow it has more than enough charm to make you forgive any shortcomings. Their version of ‘She’s Gone’ could well be one of the most perfect examples of electronic pop ever. Fantastic multilayered vocals are used against a well-crafted loop (I can even ignore the Casio samba elements); the bass sounds add a decent amount of bottom end despite not being very natural sounding. Granted, they had a belter of a song to work with, but this, alongside ‘Sara Smile’ could be reason enough to give this a listen.

The version of ‘One On One’ improves upon the original (if you’re a Hall and Oates fan yourself, you’ll understand this isn’t a claim to be made lightly). The version here is still a slow-burning, soulful affair, but this arrangement actually beats the drum programming from the original. It’s still all programmed, but most importantly, they’ve done away with that horrible Casio samba (they obviously realised having used one for ‘She’s Gone’, using another would have been extravagantly bad taste). The music concentrates on sporadically used chords against a heavily reverbed drum sound. During the instrumental breaks, the lead also employs some harder electronic treatments. Also, Inara’s voice is well suited to the song (far be it to suggest Daryl and John weren’t, there’s just something about ‘One On One’ which sounds like a weak link compared to most of their ‘H2O’ album).

This release also features one original composition: a single release, ‘Heard It On The Radio’ is supposedly designed to fit the mood of the rest of the disc and conjure an AM radio mood. It’s fairly successful in its attempt. While the verses have a slightly funky dance/pop vibe, slightly Moloko-esque, the guitars during the chorus are reminiscent of Rick Springfield and that style of feel-good 80s pop/rock – and this track more than makes up for a couple of the Hall and Oates numbers not quite hitting the spot.

If you liked The Bird and The Bee previously, their take on a selection of Hall and Oates’s tunes should leave you smiling. There’s something about this release which feels as if it were made for iPods and summer days; and for the rest of the year, file it under “quirky and fun”. However, it’s entirely possible that most Hall and Oates fans are not going to be very tolerant of this kind of meddling.