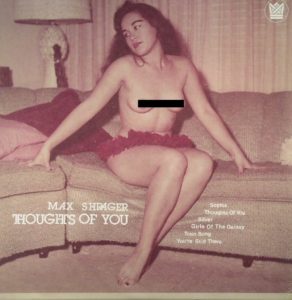 It’s not clear whether the songs are presented chronologically, but the opening track, ‘Sophia’ is one of the roughest. With no more than a demo quality sound, string noises – probably synths – call out over a steady drum beat. The warmer bass does most of all to try and save the track, leading everything through a woozy sixties inspired arrangement where Shrager himself sounds almost under the influence of the general malaise. It’s not without merit – you can always hear his musical intent and a jazzy toned guitar midway suggests a low budget homage to Hendrix’s ‘Little Wing’ – but, as first impressions go, it’s far from ideal. The title track follows with an even heftier nod to sixties music, with a very Hawaiian style in the way the dreamy melody floats along. Again, the core of the idea is more than obvious, but the actual recording leaves much to be desired. The rhythms are programmed and the demo sound is only a step up from one of Robert Pollard‘s boombox recordings. Looking beyond the homespun sound, though, the use of reverb on the harmonies is interesting – almost teasing with the feel of a sixties voyage into science fiction, even – and the simplicity of the song itself is a reasonable tribute to the chosen style, though you might not find yourselves wanting to hear it more than once.

By track three, things appear to settle down. Either that, or your ears become more attuned to Shrager’s genuinely no-frills approach. ‘Silver’ opens with hard string plucking, before a snare drum lays down a slow beat. Joined by a plunking glockenspiel, Shrager delivers a slightly slack vocal – like a cross between something from Yo La Tengo extensive catalogue and one of M. Ward‘s mumblier numbers. The almost drowsy feel draws everything in, and its simplicity is the best aspect. In a change of mood midway brings more complexity as harmony vocals appear and lift the tune immensely, eventually laying down some mildly psychedelic pop. It is soon clear that these two styles meld nicely and fill two and a half minutes with ease. ‘While You’re Still There’ works an unapologetic pumping bass, while the guitars sound like they’re emerging from a stretched cassette. The bones of the tune are fine – and (as always) might be more enjoyable if recorded properly – and a kitschy keyboard solo surely finds the performer placing tongue in cheek with regard to his love of musical throwbacks. A breathy dual vocal adds a dreampop quality to an otherwise thin tune…and while not Shrager’s best, once again, his musical intents are obvious enough.

The EP’s stand out, ‘Girls of The Galaxy’ mixes Shrager’s indie slacker style with some bigger beats, resulting in something that could be a Beck demo. With squonking and quirky keyboard sounds overlaid in places, there’s so often something to catch the ear, while Shrager approaches all vocals with a steady, pop-like disquieting quietness. His higher registers occasionally remind of Justin Kline, but the hazy, lazy feel all so often is its own thing, placing Shrager at the forefront of his own brand of retro-electro pop dream. If anything saves the EP it’s this track, but the muted strings and 50s throwback elements of the subsequent ‘Train Song’ are also very cool. With a few louder alt-rock elements that seem to add an almost postmodern smugness, there’s interest here for sure. Even if these recordings don’t necessary afford his best arrangements an entirely appropriate send off, between these two songs, there’s a feeling that Shrager could catch a few lo-fi devotees off-guard.

Says Shrager himself, “Each song on this record represents a period of my life. Listening to them brings me back to the experiences that inspired them, like a smell that causes a flood of memories.”  Naturally, his audience won’t have such luxury; they’ll just have to take the tunes as they find them – a collection of raw, sometimes echoing, but often oddly familiar sounds that owe much to a few musicians of a lo-fi past.  This isn’t going to be a record for everyone, but those who’ve enjoyed parts of Daniel Johnston’s eclectic output, Tobin Sprout, or even some of Lou Barlow’s more wistful outpourings might find something with which they are able to connect.