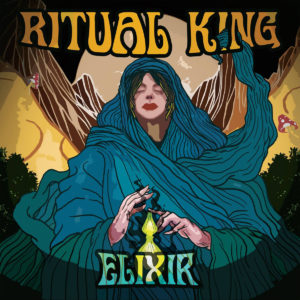 Although marketing themselves as a blues rock band, Ritual King don’t always play much in the way of anything too bluesy on most of their debut EP, ‘Elixir’. Their sound is very much of a late 70s rock persuasion, occasionally injected with a very slight bluesy swagger – a sound that, although fairly solid, too often lacks that special something needed to distinguish them from so many other UK bands at the time of release.

While rather generic, to say the least, it must be said that the trio ply their musical craft with enthusiasm. This is something very much obvious from set opener ‘Devil’s Chokehold’ where the rock riffs come thick and fast, sort of like a homage to old UFO. In fact, there’s a natural tone in Jordan Leppitt’s vocal delivery that very occasionally puts him stylistically not too far from the young Phil Mogg; it’s a voice that when set against a driving riff has some appeal, if not a huge presence. The rhythm section of Dan Godwin and Rodge Hodges (bass and drums, respectively) works hard to push the pace ever forward and keep things bristling along, and in all, it’s a reasonable rocker that tips the hat to rock’s formative years while clinging on to the period in which the recording was made. If used as a first impression, however, this is one of those tunes that’s quite enjoyable while it plays, but too easily forgotten afterwards.

The big nod to blues oriented riffs comes sporadically throughout ‘ISD’, as Leppitt cranks a very old school guitar riff. He doesn’t ever seem to really run with it, though; every few bars, the riffs change for more of a hard rock stance to accommodate his vocal. This is a pity, especially as the rockier part of the riff isn’t particularly inspiring and the vocal appears disjointed. Coming across like three half formed ideas welded together, this track is a little frustrating. Still, there’s a nugget of a good idea in here somewhere: if they could have taken the bluesier element and amplified it – really cranked it – they might be on to something. Riff wise, this opening pair of numbers suggests that Ritual King are far better in a live setting.

Showing Ritual King in a much better light, ‘Detachment’ begins with a hefty drum part which is quickly joined by a few chunky guitar chords. Moving into the verse, the guitar tone is more than admirable when tackling a funky, strutting riff and the band sounds tight. Chorus wise, harmonies beef up a wordy hook and the combination of voices makes the band sound more together than ever; it’s a chorus that’s fun rather than actually memorable but, all the same, it’s well suited to the job in hand. The real highlight of this number is the instrumental break, left in the hands of a two tiered guitar solo – first tapped, then wah-wahed to accentuate the blues within the hard rock. Although more 90s influenced than 70s, this is an improvement. ‘Too Fast’, meanwhile, sets up false hope by featuring a cracking slide guitar intro that’s very much influenced by Led Zep‘s cover of ‘Travelling Riverside Blues’, but at the point where some great blues sounds like it’ll take hold, the guys retreat to relatively safe hard rock territory. It’s well played – streets ahead of the first couple of tracks from this EP, with Hodges playing very well – but more blues would have improved things, especially given the bluesy solo used as the big finish.

The single release ‘Unorthodox Satisfaction’ finds the band branching out a little more, firstly by introducing more folk-rock acoustic elements and, secondly, by devoting one of two instrumental breaks to a Celtic inspired melody. That, in turn, adds a slight jig to proceedings, as well as some smart bass work. These moments alone show Ritual King to be a band with some solid ideas, even if things don’t always pan out in the most exceptional way. The verse thunders along under a circular riff, harmony vocals try their best to summon up excitement, but fall short in comparison to the music. Musically, the folky bits are cool and the hard rock stance is solid. As the tune progresses, the upbeat riffs sound increasingly catchy and it’s obvious these guys have plundered UFO, Thin Lizzy and even a little Foghat for inspiration. Mixing all the elements, this soon becomes their best arrangement; throw in a second bluesy solo and a reasonable chorus and this becomes a tune with a bit of everything – the EP worth hearing for this number alone, so from unsure beginnings, Ritual King at least go out on a high.

Although very little reaches the heights of single ‘Unorthodox Satisfaction’, there’s nothing much to dislike here – the band are more than competent with a riff or five and know how to pen a chorus. All too often, though, there’s nothing to get over excited about here either. Although the single suggests these are musicians who will get better over time, too much of this EP is concerned with fairly standard sounding hard rock. Still…it should please listeners who aren’t so demanding.