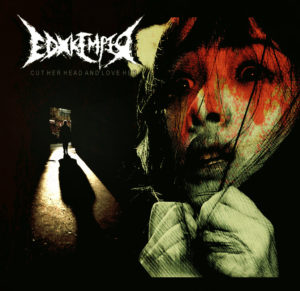 This is clear straight away…and with the repeated and staccato shouts of ‘Dead and Gone’ backed by a fearsome rumbling, the band make their entrance with a breakneck intensity. The drumming – as expected – is intense and unforgiving, but with a couple of slightly slower riffs breaking through, it shows a strong variation for the style. For the briefest of moments, there’s a feeling the band might launch into something a touch more thrash based…and then the number stops. In and out in under a minute, their work is done – and it’s still one of the longer pieces on this release! With approximately a second to catch breath, it’s into ‘5 Years In Hell’, a track that opens with a thrashy riff similar to the close of the previous track. Again, with about a minute to play with, their crusty sound never really stretches beyond the basics, but there’s long enough to get your ears around more faultless extreme drumming and a vocal performance that’s split between two different styles – one deep and almost death metally, the other a throaty rasp. Neither contains anything that’s distinguishable as words…but, man, these guys are angry. ‘Desperate Cries’, meanwhile, comes across as the ultimate in EDxKEMPER’s arsenal of noise: a hybrid of death metal and grindcore that allows distorted slower riffs to occasionally break up the pneumatics and for the bass to drive more of an unrelenting death rattle to anchor everything. If you love extreme music, you’ll knock yourselves out with this and also the title track – which, rather unsurprisingly, follows in a very similar vein.

With no intro to ease things in, ‘I.C.H.M.T.A.B.T.A.S.M.’ sounds at first as if it’s more of a homage to the original grindcore scene, especially in the way Sotris attacks the vocal in the manner of a series of unconnected, brutal yelps, but even here, EdxKEMPER show some interest in extreme musics from later years, with Vanias daring to drop in a couple of longer and deeper guitar chords, thus giving the number the feeling of a structure. Elsewhere, too, his work moves beyond mere thrashing, as the intro of ‘For a Piece of Rotting Flesh’ teases with some traditional death metal vibes. Working more of a riff, the band takes extreme grindcore into other spheres and in doing so, this makes this particular track’s chorus and a key change so more obvious…but still manages to hang onto a constantly mounting tension. ‘Your Pitiful Life’ takes a huge step back into a purer, crust driven anger for it’s opening musical salvo, which makes it all the more surprising when a couple of traditional thrash riffs rear up at the mid point and the whole band descends into a slow, crushing groove, with a menacing death growl for a close. The slow moments probably only total about fifteen seconds, but that’s still a quarter of a track when faced with this kind of brutal assault. Rounding out the release, ‘Her Soul Lives In Me’ attempts more death/crust experimentation; ‘Not For Your Eyes’ begins with a great chord progression and quickly drops into fairly run of the mill crust-noise and ‘Dear Mother’ almost destroys Michalis’s snare drums, as their thin and trebly sound pierces through everything. None of these anything new to the band’s repertoire, but in terms of short, loud and confronting, more of the right boxes are definitely ticked. …And that’s it for this release – all seven minutes and fifty eight seconds of it. No flab. No filler. Just balls.

Despite Lee Dorrian’s claim back in 2009 that all the original grindcore bands were just copied and cloned and therefore the lack of originality meant that grindcore was no longer as extreme, well, that’s a bit of an odd view. Released seven years later, this is nothing if not extreme – it’s as valid as bands were circa 1990. It’s a veritable ten track boot in the face; a skull pounding, head exploding, angry fucking hellbeast. It stands no chance of having the remotest appeal to anyone who isn’t interested in grindcore, but that’s not really the point. EDxKEMPER so obviously never intended this as part of some musical conversion rally…