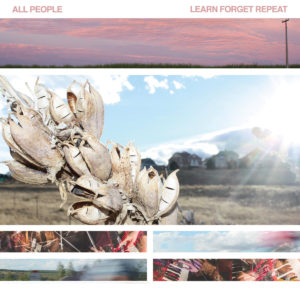 At the beginning of 2013, All People released their debut EP ‘Communicate‘. The variety within the seven tracks showed the work of a band who didn’t want to be hampered by genre constraints. The mix of reggae, ska, punk and alternative rock proved that the band arisen from the ashes of Fatter Than Albert had a potentially great future.

Two years on, they returned with a full length, ‘Learn Forget Repeat’, a release which, if anything, is even more varied. Opener ‘Consume’ hits hard from the outset, at first working a guitar riff that could provide the backbone of a Stiff Little Fingers classic. As the number moves into the first verse, however, it’s obvious it’s not that straight. Cutting through the guitars, a piano line can be heard: it’s not something you’d necessarily expect to hear, but somehow it works. The punky riffs subside into a more choppy ska rhythm and everything quickly makes for a complete sounding track. By the second verse, All People have other ideas and refuse to settle with what they already have. Pushing boundaries farther, they work in a little alt-rock, a brief interlude where the piano takes centre stage and a coda that allows drummer Robert Landry the opportunity to bash some heavy rhythms. It sounds like it ought to be a confused mess, and yet, All People pull everything together very effectively. Teasing with a crushing drum part and quasi-metal riff, ‘Unfinished Book’ takes a sidestep into a slower paced rocker that disposes of most of their punk influences completely. The main riff is great; combining it with a squirly, almost squelchy keyboard sound for extra weight makes it even better. Moving into the chorus, the music shifts into sounds of a more buoyant alt-rock variety, with a bright keyboard and sunny backing vocals complimenting the tune. The weak link on this track is Daniel Rey, whose distinctive and slightly drawling vocal style just doesn’t fit with the other more feelgood sounds. Still, it’s all part of All People’s desires not to play things in a completely predictable manner…and there’s still much here to enjoy.

The short ‘Devil’ provides a complete musical change, mixing up echoing music that’s somewhere between a slowed down reggae tune and cinematic noise, while a crooned vocal dominates. The opening of the number, especially, appears striking as the easy listening, lounge act slant is not so far removed from something by Magnetic Fields. Following a false start, ‘Mind’ employs a quirky time signature, a slightly threatening vocal and some really off-kilter melodies to create something that sounds like the marriage of punk ideals and Mr. Bungle’s take on circus music, allowing Rey opportunity to impress on the organ while dark guitar riffs weave in and out of a repeated hook. This is a superb track – the quirky instrumental breaks stand up to repeated listens without losing any of their impact. ‘Doubt’ throws the band head first into a punky riff, bolstered by a great bass sound and some tough gang vocals – also inviting serious pogoing intents – but isn’t necessarily among the more interesting works here, while the alt-rock leanings of ‘Conversations’ present something entirely different (again!). The ringing guitar tones throughout the intro are almost unlike anything in the All People canon to date, while the fat sound of the main riff is a defiant nineties throwback. These two elements could be the work of a different band entirely; there’s a little salvation from a bouncier verse and a couple of interesting drum flourishes, but overall, it’s the album’s least interesting cut. Again, that’s not to say it’s bad, but you’ll find similar and potentially superior works from other bands elsewhere, which really doesn’t apply so much to ‘Mind’, or a couple of tracks that follow.

After an interesting, if somewhat wobbly start, approaching the middle of the album, the things that made the debut so captivating come through in abundance. The instrumental cut ‘LITWOP’ is a definite standout, showcasing Greg Rodrigue’s superb bass playing, set against a very natural drum sound. The slow beats tap into a rock-reggae crossover and in doing so leave some solid grooves. During the track’s first half, retro sounding and tinkling keyboards add extra melody, but it’s during the second half the track really catches fire. Here, the melodies are shared between Josh Campbell’s surprisingly fluid guitar lines and a Rico-esque trombone lead, courtesy of Rey. ‘Alienate’ brings some straight up punk; sharp riffs and a great chorus coming together with ease, as All People embark on a rare journey into speed over complexity and, in doing so, should please fans of all things spiky. A similar energy drives the superior ‘Internal’, where the sharp edges are tempered by a swirling organ melody and plenty of bounce. While this album has enjoyable material scattered throughout, it’s this trilogy of tunes that could bring listeners back time and again.

For those who liked the sharp political bent from the EP, ‘Disfunction’ [sic] is happy to oblige via a spoken word interlude, backed by pointed guitar riff. In and out in just over a minute, it could come across as a half-finished idea, but as before, it’s more about the band chucking different styles out there to see what sticks. ‘Love’, meanwhile, works similar alt-rock chops, but peps them up with a couple of punk-driven breakdowns, a superb lead guitar motif and even better foray into darker ska climes with a great organ accompaniment. The ska part is so fantastic, you’ll probably wish they’d made a far bigger feature of it. Trailing off with the hook line, “Love is the answer / Love is the way”, there’s little doubt that this has been a rather uplifting and positive affair. Never content to settle, All People throw yet another musical idea into the ring during the closing number ‘L’eternal Printemps’, by teasing with simple and slow piano motifs that have far more in common with Nick Cave & The Bad Seeds than any punk you’d care to name. The arrival of a vocal – forlorn and almost heartbroken with a cracking and wobbling tone – marks no huge change, before an almost tribal, slow drum beat links the elements together. Eventually bursting into life with the presence of a thickly toned guitar riff, this piece rumbles along with intent…and it’s almost nothing like the band who dropped some superb reggae vibes earlier in their career. Does this mark the beginning of a new chapter, sweeping away the Clash-obsessions of youth? Only All People know for sure, and cranking the guitar riff to ever louder intents, they eventually leave us feeling uneasy and tense.

Overall, this album isn’t always as hard hitting as the EP, but has more than its share of strong material. Those looking for a straight up ska and punk approach may feel short changed, but an increase in sharp guitar riffs and ever varied approach to composition always shows the band in a position of strength, never content just to deliver what’s expected – even if the results don’t always work. Although the results are rarely perfect, ‘Learn Forget Repeat’ finds All People’s bandwagon of positivity and strength rolling on apace, leaving behind a sometimes very rewarding (and sometimes frustrating) listen.