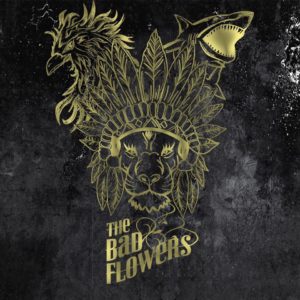 Blending classic hard rock with a little 70s trashiness, The Bad Flowers come across as black-hearted retro souls on their self-released debut EP. From the dirt in their boots to the electricity pulsing through their veins, the amped up trio pull influence from classic hard rock of the past, creating a sound that’s tailor made for the classic rock fan. The first fruits of their studio work are loud and brash without being unnecessarily confrontational; the song writing tried and tested, but – thankfully – rarely slips into wanton cliché.

‘Can You Feel It’, a hugely uptempo rocker, introduces the band via a really trashy intro where Tom Leighton’s guitar chords come loudly and thickly, with a huge drum part to match. Tearing through the hard rock riff, the Flowers announce their presence in big and brash fashion and the eventual addition of Leighton’s vocal – in this case, a bellowing, Ian Astbury inflected performance – only reinforces the general bluster. The relatively live production sound that doesn’t necessarily bring out the finer points of the music but, in many ways, it doesn’t have to, for this is the sound of a power trio in every sense. During the instrumental workout bassist Dale Tonk drives the music with a pumped up sound, allowing for a bluesy solo to take hold, while still leaving room for hints of more complex things. In just four minutes, The Bad Flowers have arrived, set the opposition on their nerve and really proved themselves. Slowing down, the filthy blues rock of ‘City Lights’ makes a huge feature of Leighton’s guitar as he churns out fat riffs by the dozen, hanging on to the prior heaviness while simultaneously offering something a lot more melodic. The stop start nature of the opening bars really accentuates the heaviness of the riff, while the chugging yet fluid groove of the main riff is very appealing. As before, there’s a real presence in the lead vocal – Leighton, although seemingly untrained, comes with such confidence and a shouty gang vocal backing him up just adds to the rawness. The riff bridging the verses is a killer, but is still outdone by the hefty swagger of the instrumental break, where grubby lead guitars promise good times and grit – plenty of grit.

‘Big Country’ sits somewhere between the two, with a hefty beat and cocky swaggering riff to back up a macho travelogue. Lyrically, the tales of desert and tree spotting aren’t much better than America’s “plants and birds and rocks and things” of forty years previously, but it’s likely that you can get overwhelmed at the size of continents if you over-think them… Looking at everything combined, this track has one of the EP’s strongest riffs and most of the elements come across with force, adding weight to The Bad Flowers sound while showing off how naturally these three guys blend their musical skills. If heavy blues is your bag, then the verses of ‘Run Run Run’ should bring enjoyment via both weightiness and style, sounding like Black Stone Cherry tune infused with a Tony Iommi lead. The slower, more spacious approach allows Karl Seleckis’s bombastic drum sound to be heard more clearly than ever – and it’s great – before the band switch gears for a boogie-rock chorus with a simple hook that summons good times. It’s not necessarily the strongest of these four songs – a strong case can be made for ‘City Lights’ in that regard – but the contrast of the two moods shows a gift for effective arrangement.

The production might just be a little too abrasive in places, but this EP shows a huge amount of promise. It’s four tracks come with the kind of energy that should translate live and in Leighton they have a commanding vocalist that’s got a huge and timeless appeal. Forget the overhyped and frankly average Temperance Movement – alongside BlackWolf, The Bad Flowers are where the British classic rock revival is really at.