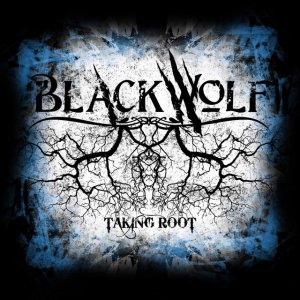 Although still a relatively new band by the end of 2012, BlackWolf had already been busy on the live circuit, having played the Bulldog Bash biker’s festival (twice) and trodden the boards with many other rock bands, including Jettblack (a band who seemed to tour endlessly).  With an old-school rock sound that’s tailor made for live performance (possibly complimented with a fine ale), this EP may not always show off the Bristol band’s energy as well as a live setting – something true of most bands – but definitely shows them to be very accomplished musicians and reasonable songwriters.

Opening with a classic sounding rock riff, ‘Stairway Ticket’ wrong-foots the listener by quickly and seemlessly morphing into something a little funkier than expected.  Multi-tracked guitars handle some great chops throughout – and it’s soon obvious these guys are working to a very professional standard.  It’s vocalist Scott Sharp who carries this particular piece, with his voice moving between rock-blues cries to higher register banshee wails throughout.  A strong start, certainly…and if this grabs you, you’ll enjoy the rest even more. ‘Finding Fables’ has a basis that sounds like a harder rock Black Crowes, the riffs bolstered by a really hard drum line.  A couple of Sharp’s more 80s wails occasionally seem at odds with the definite 70s leanings of the tune but, once again, everyone puts in maximum effort.

With tapped notes during its intro and an impassioned vocal cry to kick things off, ‘Wayward One’ gently tips the hat to AC/DC before adopting a similar mood to the previous couple of numbers.  While there may not be a great variation from anything that’s gone before, John Greenhill shows off an ability to work a solid riff – and a couple of well-honed solos – while the rhythm section lay down some good work.  Leaving the strongest track for last, ‘Seeds’ is a cocksure workout which, during the verses, has a spikier basis than Blackwolf’s other tunes.  Despite this, it manages not to be any more aggressive, as this spiky quality is counterbalanced by a groove-laden riff which sounds a little Zeppelin-ish in places, but also with a southern tinge not unlike the excellent Black Stone Cherry.  Once again, the bones of this tune may not be far removed from those you’ve heard previously, but all the same, there’s a sense of the band upping their game just a touch… In a couple of places, Sharp reigns his voice in a little, while bassist Ben Webb gets opportunity to tear into a bass solo – and he’s a very gifted player.

Although BlackWolf’s sound borrows heavily from many classic rock influences – a touch of Zep here, a dose of Crowes there, with a sound hinting at a lighter equivalent of Black Stone Cherry lurking throughout –  thankfully, no influences are flaunted too heavily.  Even during the most obvious hat-tipping, Blackwolf’s nods to others seem nowhere near as blatant as with other bands [for example, The Temperance Movement’s subtle-as-a-brick Black Crowes-isms]. While it would have been wise for the band to have included one slow number (if nothing else, to show a fuller range of their talents), this EP provides a great taster.  If you like meaty, tuneful hard rock, this is a British band worthy of your support.