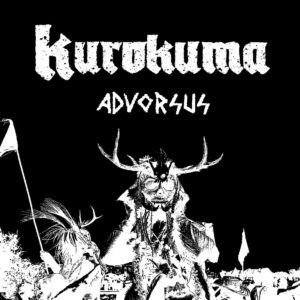 There have been a vast number of bands and musicians to come out of Sheffield over the years: Arctic Monkeys, Joe Cocker, Human League, Pulp, Def Leppard and ABC are arguably the most successful, but doom metal trio Kurokuma are almost without doubt the heaviest. These guys don’t just mean business – they’re coming to smash you into oblivion with an intensity that is truly impressive.

The three songs chosen by Kurokuma to represent their first recordings are confrontational and come with an undeniable power, but at the same time there are layers within the sludge and little bits and pieces that lift their heavier-than-thou sounds to a new level. The EP’s finest offering, ‘Dark Triad’, begins with a rhythmic edge as tribal congas and bells lay down a great sound. Joined by quiet guitar lines, it builds slowly…and even as those guitars turn up the volume, the percussive slant holds firm, lending a feeling we’re on the way to something interesting. …And then it all stops dead. As far as intros are concerned, this track begins with the ultimate red herring. Following this, guitarist Jacob Mazlum sets upon an attack via a slow, heavy and almost strutting sound, repeating the same melody over…and finally, after being counted in via a cymbal, Kurokuma go headfirst into the heavier edge of the band’s musical barrage. What once had a world music meets stoner groove now has a defiant sludgy slowness and as the adjoining vocal steps forth with a throat clearing growl things become even more frightening. Even the presence of a spooked out lead riff midway doesn’t really lighten the mood. If it’s riffs you want, this is great – if you want a song to go with that, forget it. It’s abundantly clear that these guys aren’t doing things by half, though, since treacly pacing and a sledgehammer anger throughout the next movement comes across with such ferocity, it’s sure to result in an appreciative head nodding if sludge is totally your thing. Moving into the end section, the band actually decide to speed up, but rather than do so for melodic purposes, it’s more to allow drummer Joe E. Allen to hit upon a superb groove. He’s a great player and when he locks in with bassist George Ionita, they work a heavy melody that could potentially be enjoyed for a prolonged period.

The other two tracks don’t quite have the same scope but, in sludge terms, there’s much to enjoy. With it’s dirty, heavy chug, ‘Lust’ opts for an odd hybrid of oppressive sludge and groove metal in the riff department, before adding an odder death metal grunt by way of a vocal. As if Glenn Deicide stopped by to jam with Crowbar, this is intense; however, the constant groove allows everything to move surprisingly freely. Between the vocal sections, a slower space-rock/sludge marriage does nothing particularly melodic, but very much reinforces the band’s heavier angle, all before an unexpected use of percussion lends a strange quirk to the instrumental midbreak. You want flashy? This isn’t it. You want intensive guitar solos? Not a chance. It’s all sludge and groove but – as before – but there’s an overriding sense that these guys are superb musicians. They mightn’t be great vocalists, but when it comes to command of a riff they’re at the top of their game. Turning in their heaviest performance, ‘Kali’ combines more growls with an almost black metal hiss, phased guitars and a slow and almost bewildering level of sludge. There’s far less of a tune than ever before; the band attack slowly and venomously, like black-tongued, possessed entities, thrusting slow riffs into the ears of the North of England and far beyond, tiring the weak-willed with their curious and slow crawl of a musical assault. After about three minutes it gets slower and heavier still – unbelievable, but true – with the bass taking hold of an almost inaudible Earth’s-crust-shaking rumble and the guitar sound making most doom sound like melodic blues. Slowly, heavily, meticulously the beast lurches from the swamp…and via some subtle percussion and a deep drone, the band bow out, knowing their audience have been thoroughly sedated by this musical weightiness.

This EP is insanely heavy and sludgy in the way that all sludge and doom should be, but Kurokuma are musically a cut above your average sludge beasts. The tendencies to drop in extra layers or the odd rhythmic quirk means that these tracks never just blur into endless distorted drudgery (not even ‘Kali’) – although such quirks never truly dilute the general intent, either. The really confrontational vocal growl might not always work but, even then, it’s almost like the band have chosen that style in order to very deliberately increase their heaviness. If you have even the merest passing interest in doom, then check this out. Kurokuma join Witch Charmer, Allfather and Morag Tong as part of a very British movement in doom sounds…and if you like it slow and heavy, like an electrified buzzdozer, they’re ready to do a fairly destructive job on your senses.