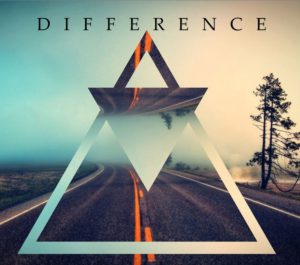 Active from the mid to late 80s, The Difference were a progressive rock band that, while indebted to the usual influences from Rush and the big progressive hitters of the era, also tempered their sound with various other more contemporary influences – ranging from 80s pop and AOR to the tight quirks of The Police. On their 1988 EP, the coming together of older prog sounds with an eighties sharpness results in some very pleasing music that, although hampered slightly by budgetary contraints, still presents some great ideas.

‘Reach Out’ gives the listener a really strong indication of some of the band’s musical interests from the outset, as a cinematic synth pumps out a couple of chords over a hard backdrop, before Rick Henretty’s rhythm guitar joins with a staccato riff, heavy in loops and delays. While the chief influence comes directly from David Gilmour (and more specifically the style of ‘Another Brick In The Wall, part 1’), the end results are far closer to Steven Wilson‘s experiments on the Porcupine Tree classic ‘Voyage 34’. Obviously this is great, but quickly it’s all change, musically speaking, once the rest of the band provide input. That guitar slunks to the rear – but rarely stops – and the main thrust of the tune begins to work a solid hybrid of prog rock and AOR. A few more aggressive guitars bring plenty of rock, but pretty soon the vocal (which isn’t always the best) and a reasonable sized hook show The Difference understand the importance of actual songs. Although a few more atmospheric proggy wanderings drift in and out, the focus is very much on the melodies and harmonies and a couple of plays really allows the basic core of this tune to make an impression. It mightn’t be Kevin Poynter’s best performance (he certainly puts in a couple of better vocals later on) and the demo quality production doesn’t necessarily give the tune the best send off, but looking at it objectively, there’s so much to like about this – especially if you’re fond of ‘Heads or Tales’ era Saga.

Looking towards something a little more commercial, even AOR tinged, ‘My Heart Cries’ opens with a clean and crisp piano melody before settling into a rolling sound where an upfront bass joins a few melodic guitar chops. Moving into the bulk of the verse, a soft-ish vocal takes the reigns and the AOR elements become stronger, but that bassline holds firm. With Poynter sounding more at ease with a great counter harmony joining him, it’s already better than the opener. More than thatm though, with Mark Sumpter’s impressive bass sound being more prominant, a cracking guitar solo and stronger melody throughout, it’s a genuine highlight. With more swathes of keyboards and a solid rhythm, it’s even easier to hear influence from prime era Saga as well as nods to the likes of Mr. Mister and Lodgic; the unity within the band and their love for this style truly comes across.

In a complete change of mood, ‘Hold On’ trades in the smoother edges for slightly distorted guitars and an absolutely fantastic drum part, before switching to a new wavish, spiky, prog-pop base. Borrowing its chief cues from ‘Power Windows’ era Rush, Eight Seconds and their ilk and with Henretty lifting everything with a filtered, slightly jazzy guitar part influenced by Andy Summers, the basis for a great track is in place. The two distinctly different styles displayed here come together somehow without jarring; that’s partly due to yet another sharp chorus, but kudos must go to an incredibly tight rhythm section. Hearing this, you’ll probably find yourselves wondering how The Difference’s career never got any further. More busy rhythms inform ‘Make The Choice’ where Police-ish edges are again in evidence, as well as a few quirky, heavy moments as well as vocal parts indebted to various elements of the eighties prog underground, with nods to Jadis and a couple of others. Although a little more accessible than ‘Hold On’, it’s still a number dictated by shifting moods and, as such, drummer Clanton May plays his arse off yet again. This is a great example of how – much like Saga and Rush – prog bands in the 80s could get very technical without actually losing sight of an actual song. Bringing the mood down to finish, ‘Calling My Name’ reinstates a core of AOR, driven by piano – this time in a ballady style – creating a simple melody that’s spacious enough for Kevin’s voice to stretch out. The guitars which subsequently join the voice and piano are crisp and clean at first, not so far removed from Steve Rothery’s work on parts of Marillion‘s hugely underrated ‘Holidays In Eden’ album, but soon become bigger and more forceful, culminating in a soaring solo worthy of many an AOR tune. Meanwhile, the rest of the band work hard to make this melodic rocker a solid listen and do so admirably, but it’s simpler approach – and obvious demo recorded roots – mean that it’s not quite up to the standard of the rest of the material. There’s the basis of a great song here and the guitar work is strong, but it’s the weakest of the bunch just by its very nature. Even so, you’ll hear the sound of a hard working and very focused band.

These tunes are uplifting and oddly nostalgic. For those who prefer it when prog takes on board pop influences instead of becoming too indebted to metal (as far too many bands did in the nineties and beyond), The Difference provide plenty of salvation. It may have only teased the underground and reached out to the band’s friends at the time of its original recording, but this five track EP is ripe for rediscovery.

1 thought on “THE DIFFERENCE – EP”