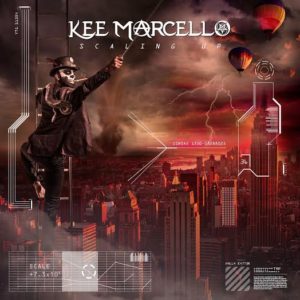 Judging by his 2016 release, ‘Scaling Up’ (Marcello’s fifth solo record), it’s not so hard to see why much of his solo output hasn’t really reached the big audiences as his tenure with Europe. The dozen tracks are very much of the predictable hard rock variety. There are a few good choruses and a handful of very strongly crafted riffs; Marcello’s lead tone – as usual – has a definite presence. Unfortunately, that’s not enough, since it’s one of those albums you’ll forget almost as soon as it’s over. There’s nothing terrible about it – unless you take into account that Marcello is a middling vocalist – but there’s very little that could be considered outstanding.

With one eye on the past, two songs are reworked from abandoned demos dating back to ‘Prisoners In Paradise’. ‘Wild Child’ mixes a rocky backdrop with some bluesy leads throughout and there’s a definite feeling of Europe’s harder sound at it’s heart. That said, its swaggering riff perhaps owes more to fellow Swedes The Electric Boys. Tackling this riff, Kee sounds as if he’s in his element and although his voice isn’t the best, it seems well suited to the job in hand. The chorus, on the other hand, is not so good. A huge choir of vocals help make everything feel big and jubilant, but it’s lyrically repetitive and it’s perhaps very easy to see why it stayed on the cutting room floor some twenty five years earlier. ‘Don’t Know How To Love No More’, on the other hand, is much better, pitching a cleaner guitar sound against a big vocal for more of an AOR vibe. It’s a slow burning tune that starts well, then improves during a strong pre-chorus delivering a big-ish hook and eventually drops into a solid hard rock groove for the instrumental section. In terms of arrangement, it’s fairly thoughtful, gradually building in atmosphere. The big drawback is that Kee’s voice isn’t the best you’ll ever hear, but all the same, he approaches the tune will all the confidence of a man who thinks he’s got as much range and power of Glenn Hughes or Joey Tempest. He really hasn’t and that makes it more of a pity the world didn’t get to hear Joey put his stamp on this number back in ’91.

The title track results in four minutes’ worth of stodgy melodic rock with a heavy bluesy tint. The riff – taken at face value – is a great one. Within under a minute, though, it should be obvious to most that the bulk of the tune has been lifted almost lock-stock from Whitesnake‘s ‘Ready An’ Willin’, with Kee stretching his voice to approximate a David Coverdale style as best as he’s able. Plagiarism aside (you can even imagine the ‘Ready An’ Willin’ vocal over the “higher and higher” vocal parts), it’s one of the album’s best tunes, capturing a great guitar sound and a halfway memorable song. It’s sort memorable for all the wrong reasons, of course… Quite fun, ‘On The Radio’ has a funky swagger and some carefree woo-hoos to kick everything off, before settling into a punchy riff that’s a reasonable homage to Sammy Hagar. The chorus on this track is very strong, with its story of good times and youth soundtracked to the radio. It won’t change the world, but with a name-check for Journey and a superb solo along the way, it delivers undemanding entertainment, while ‘Soldier Down’ is a fast paced workout that is very much a second division take on Deep Purple’s 1974-75 period. A tune which features one of the year’s most histrionic guitar solos, it’s a track that needs to be heard to be believed. It’s rather tiring, though so maybe hearing it just once will be enough!

The rest of the album is filled with bog standard hard rock. ‘Fix Me’ at first sounds like it’ll have the vigour of David Lee Roth’s early solo output but quickly transforms into a sub-Van Hagar affair. On first listen, it seems a bit plodding and ordinary, but repeated listens show a melodic chorus that had a lot of potential but somehow escaped the best send-off – ‘On The Radio’ already demonstrated this style in a superior way. ‘Black Hole Star’ is little more than a generic hard rocker that fails to capitalise on a chorus or melody and ‘Scandinavia’ presents chunky hard rock that’s fairly entertaining, but seldom more. ‘Good Man Gone Bad’, meanwhile, promises good things at the outset with a riff that’s a dead ringer for Stevie Salas and also features two or three masterful solos. It’s a case of great music being wasted, though, as the vocal sections damage the track severely, taking what could have been a genuine tour-de-force and demoting it to an overlong not very interesting blues rocker. Marcello is in better voice than usual, but there’s always a feeling that this track should have been better than it is.

The emotive ‘Finger on The Trigger’ could have been decent given it’s more ballad oriented nature, but an uninspired vocal really lets the side down and synthesized strings really don’t do anything to improve things. The guitar leads are superb, although Jeff Beck’s lawyers might notice more than a trace of ‘Cause We’ve Ended As Lovers’ in the execution. Coincidentally, the album also closes with a track named ‘Blow By Blow’, though no further connection with Beck should be sought. The number in question is a rather boorish affair that could not leave a worse last impression of this album if it tried. This frankly embarrassing hard rocker – three decades out of date even at the time of recording – comes across like a shitty version of Def Leppard’s ‘Lets Get Rocked’ and what passes as a tune asserts an ugly Neanderthal stance throughout. It makes Def Leppard‘s worst excesses in this area seem like sheer musical poetry. It even makes Bon Jovi’s ‘King of the Mountain’ sound like a hard rock classic. Kee bids us “welcome to the show” and among the many ensuing clichés combining to create a very sorry lyric, he also suggests to “drive them crazy, chick / Know how to flick their switch”. The switch is indeed being flicked, mate…towards the off position.

Marcello was always a good guitarist and – even on this record – he’s capable of bringing a great tone and some solid guitar chops, but what the bulk of ‘Scaling Up’ doesn’t have is a decent singer or songs that truly inspire. That’s a big problem. There are a couple of decent tracks, but for everyone but the narrow minded listener or the Europe besotted, it’s a record that’ll get played once or twice and then put back on the shelf. For this kind of thing done well in the twenty first century, there are far better albums out there – not least of all from Marcello’s ex-bandmates: Europe’s 2012 offering ‘Bag of Bones’ really puts this to shame.