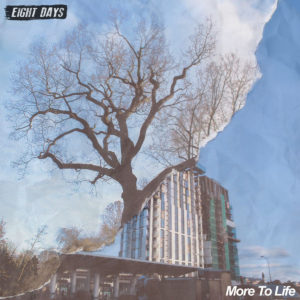 The formation of Eight Days dates back to the band’s school years, but like so many, they wouldn’t be ready to take their music careers seriously until a fair while later. Refusing to take the easy way out, they spurned the obvious punk pop sounds practised by so many and set about creating a ferocious sound that fused hardcore punk and metal. Although this too had been done by many bands, by the time of Eight Days’ debut release in 2014, it was nowhere as predictable – or stale, even – as the more common, identikit pop-punk mould had become. The band then toured extensively, picking up fans along the way and found time to plug a recording gap with two new songs and a demo on their ‘Surrounded By Ones Who Want Me To Fail’ release in 2015. In the first half of 2016, Eight Days recorded four new tracks; these were eventually released as the ‘More To Life’ EP in the autumn.

‘More to Life’ presents Eight Days’ best work so far. The songs are still angry, but the flourishes with the hardcore sounds are particularly smart and production-wise, it’s even a little tougher than before. If you’ve followed the band from the beginning, you’ll definitely savour every moment of this release – short as it may be. For those finding the band anew, those who like a riff with a sledgehammer quality combined with a throat-rawed hardcore vocal, there’s a good chance that these songs from the London/Kent based trio will find themselves in heavy rotation.

Beginning the EP with something emotionally reflective and displaying a set of hard emotional scars, ‘Was It All Worth It’ features a few crisp alt-rock guitars before the drums rise up slowly with a huge rolling sound. At the peak, the guitars crash in with a heavy almost metalcore stance, peppered occasionally with atonal squonks and the vocal vents a genuine anger at a wasteful approach to life. “I’m tired of working so hard / I never see the light”…“my youth is slipping away”…these words come with a really barbed edge, while elsewhere the anger and force is such, the frustration comes with almost inaudible bellowing, which when set upon a pummelling riff, creates an superb first impression. Cranking the pace without losing any of the chunky edges, ‘Unclear’ thrusts apace with heavy snare drum and relentless riffs as the vocals implore us to “wake [our]selves up” in a rally to seize the day. It’s great to hear such positivity – and delivered with such militancy, too. As with the opener, it’s the drums which often stand out; during a brief instrumental break, the rolling sound shows the work of a tight player.

Mixing the punky edges with a few metalcore riffs and a couple of great key changes, ‘Counterweight’ shows influence from the mighty Gallows and just to prove the band aren’t about to get repetitive, the hard and fast approach is really tempered by a slower heavy groove during a more complex instrumental breakdown, while the introduction of a dual vocal really gives things an extra edginess. It’s a tune deserving of a cranked volume; for its style, the combination of aggression, blisteringly heavy riffery and questioning, thoughtful lyric doesn’t come much better, especially from an underground band. Finally, ‘Walls’ shows a slightly slower side to Eight Days with a very contemporary hardcore approach. Leading with a really enormous drum sound, there’s a natural echo to the heavy beats before a superb grinding bass sound takes over. If there were any doubts this band had a hefty rhythm section, the twenty seconds or so at the start of this track blasts away those unsure feelings. The guitars, meanwhile, crank in a really forceful manner like the coming together of Anthrax‘s underrated ‘Stomp 442’ and German tree-obsessed hardcore band The Blackout Argument. Add to this a particularly angry voice claiming his vision is constantly obscured and some musical shifts into a faster metal-edged hardcore punk sound – bolstered by a fearsome display of gang vocals – and Eight Days sound ready to push their boot into the face of the world.

Despite sterling efforts and a defiant attitude, Eight Days’ sound might not be a hundred percent original (let’s face it, though, few bands can claim that). That said, on these four tracks, the band show no weaknesses. Here are three guys who play with real power, conveying a genuinely angry stance throughout and show themselves to be pretty much unshakable. Although it very much picks up where their previous EP left off, this is potentially a good thing. For fans of Gallows, Vultures United and The Bronx, ‘More To Life’ should provide plenty of entertainment.