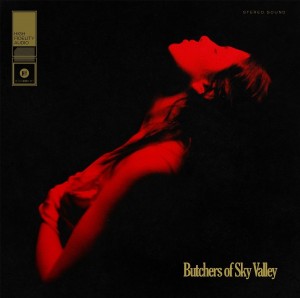 With a simple chord progression and a vocal that sounds a little like Josh Homme channelling the ghost of Jim Morrison, ‘Black Magic’ begins the album in a relatively low key fashion.  Sure, it’s dark edges may appeal to some fans of the stoner genre, but there’s no hint of Sabbathy doom or heaviness; any sinister edges owe just as much to the late sixties fuzzy blues sound. An old-fashioned grubbiness bristling under the surface of a tune that would have been perfectly at home on the early Screaming Trees outing ‘Buzz Factory’.  The whole band sounds fine – particularly guitarist John Cosenza who throws in some extended blues noodlings at the finish – but there’s more than a hint that Butchers of Sky Valley may be holding back; reeling us in, not blowing their best material straight out.  With an even slower pace, the album’s single release ‘Get Loose’ represents one of the album’s weak links.  The blues-based guitar work sets a mood that’s both gently groovy and classic sounding in its old fashioned qualities, but the slow and spacious way in which the tune unfolds just highlights a slight weakness in Mike Mokotow’s vocal delivery.  His retro croon is fine for the style, but in terms of presence, he severly lacks the gravelly cool of Mark Lanegan or the threatening sense of gravitas bought by Skeletons In The Piano man Elijah Hargrave.  Musically, however, it’s a great example of The Butchers of Sky Valley’s twenty-first century take on late sixties dark paranoia, nestling somewhere between The Doors and Blue Cheer.

From then on, however, there are huge chunks of this release that show far greater promise than this opening couplet ever suggests. For those hoping for something a little heavier, the fast paced ‘Pony Up’ places the band at their most obviously “stoner”; the way the circular, dirty riffs tear along in their downtuned manner evokes the more thrilling end of Them Crooked Vultures, allowing the drums to really pick up the pace.  The vocals still occupy the same spooked out sixties intent as heard on the quieter tracks, but with the harder rhythms, Mokotow sounds far more at ease.  Taking the fuzzy stoner sounds and pushing them in a different direction, the choppy ‘It’s Not The Pale Moon That Excites Me’ is very enjoyable with its unashamed seventies crunch.  The choruses display the same obvious love for Black Sabbath et al as found on Orange Goblin and Fu Manchu records, but it’s the verses that truly make this number stand out.  The mix of handclaps and rigid beats owes just as much to glam rock as proto-metal…and shoehorning such stompin’ greatness into the mix places this unlikely party tune among the album’s more memorable moments – its maybe even reason alone to check out this elpee.

In a sinister, yet gentle waltz, ‘Bereft Theft’ takes the band into darker climes as Mokotow whispers and croons over intermittent bass notes, soft bluesy electric guitar and an all-important muted acoustic.  It doesn’t quite have the deep and dark magic of QOTSA’s ‘Mosquito Song’, but nevertheless, there are flashes of greatness here: underplayed harmonies and mumbling vocals really help set the tone, while a hard-plucked acoustic solo presents one of the album’s musical highlights.  These acoustic elements are expanded further on ‘What The Devil Don’t Say’, an instrumental workout that encompasses quasi-Moroccan musical slants via a violin, while the guitars beaver away.  In terms of musicianship, it shows there’s potentially some great talents within the band, even if the outcome is very familiar.  While musically relatively minimalist – the solid rhythm section sit this one out – the twin guitars provide just enough musical scope to hold the attention.  For almost four minutes, ‘Young Blood’ takes a further detour into stoned folky territory, as an oddly tuned acoustic guitar meets with a naturalistic – and not the most tuneful – voice, on a recording clearly captured in one take in a corridor.  The echo present adds much to the DIY qualities of the record, not to mention enhancing the stoner vibe, but it’s quite hard to listen to all the way through.  There are bursts of strings –  so obviously included in homage to early John Cale and sometime Jefferson cohort Papa John Creach – but even these never lift the piece quite far enough.  The end result is a relatively lo-fi number you’ll either love or hate.

While this album doesn’t always come with the sheer crunch or levels of speaker-breaking fuzz bought by some practitioners of seventies revivalism, this is an intermittently strong debut on its own terms.  There are still rough edges in need of a tweak along the way and the trilogy of acoustic numbers won’t appeal to all, but in terms of overall intent, these Butchers bring a record that has more than enough appeal for those who like retro grooves.