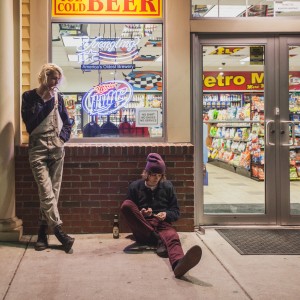 The resultant recordings – comprising three of the six songs from the ‘Waiting On Cool’ EP – sometimes make the South Carolina trio sound a touch bigger than before but not especially any more glossy. It’s not such an outlandish idea to hire a producer with a more melodic background, of course…let’s not forget that Ric Ocasek (of The Cars fame) handled studio duties on the only two Weezer albums worth hearing from end to end. Maybe a similar approach is what Heyrocco really needed to make that next important step?

Of the Benson produced trio, his influence comes across most obviously during ‘It’s Always Something New’, a track with a huge sound throughout. Featuring some pleasing guitar twiddles against a heavy drum, it starts strongly enough before dropping into a brilliant slice of alt-rock with a pinch of power pop sugariness. That sharper production, combined with an enthusiastic vocal and simple hook (bolstered by deceptively simple multi-tracked counter vocals), results in something that deserves to break Heyrocco to a wider audience. It’s like one of the best tracks Weezer still struggle to write (stop torturing your few remaining fans, Rivers, please) while the quasi-dumb lyric comes straight from the heart of the underrated Ben Kweller. That’s reason enough to buy this EP, but the goodness isn’t just confined to an obvious single choice. ‘Build It Up’ has even more of an catchy quality, with a hard rhythm guitar chopping its way through something that sounds like an Everclear b-side: the guitar’s stance is dominant but tuneful; the various overdubbed noises add extra interest throughout and a presence of a slightly off-key bridge section serves as a handy reminder that the old Heyrocco are still very much in there. A multi-layered coda shows off Benson’s impeccable production skills, but it’s the chorus that wins out…and it’s a corker. Understanding that simplicity is key, the repetition of the title mixed with a great tune proves itself utterly infectious. ‘Yeah’, meanwhile, rocks hard by mixing up a couple of 90s edged sounds with the sweaty, scattergun energies of early Arctic Monkeys. It’s half a world away from the more typical Heyrocco fare, but just as good – if not better, in fact – proving there’s plenty more mileage in the band’s mixed bag of alt-rock. By the mid point of this track with the slightly discordant guitars going hammer and tongs rhythmically and Nate Merli’s voice lending a distinctively unfussy edge, it’s so hard not to love this tune.

Moving out of the Readymade Studios, the remaining numbers – produced on the road by Ryan Zimmerman and Alex Admiral Collier – have a slightly rawer sound. Arguably the EP’s weak link, ‘Slice of Life’ works a semi acoustic guitar against a mechanical beat, which when topped by a slightly lazy vocal sounds more like a leftover from the previous record…or a Stephen Malkmus demo. With more focus placed on the voice and a non-event for a guitar solo, it becomes a love it/hate it affair, firmly aimed at those who still dig the slacker movement. That said, there’s a solid bassline throughout, complimenting a strong drum presence and in terms of indie songs, it’s easy to see what the band were aiming for. The short ‘Venice Beach’ is similarly slack, a kind of early Beck homage that drags its main delivery against a meaty beat. There are drum loops, acoustic elements and an occasional feeling of something interesting and it’s one of those tracks that improves with each hearing, but is it really the work of the same band who excelled on ‘Yeah’ and ‘…Something New’? Maybe it’s the on the road and on the fly production that’s to blame, but it all feels so half finished. The closing track ‘Perfect World’ is a return to form and also acts as a timely reminder of why you probably loved Heyrocco previously. Clean toned electric guitars pluck a slightly woozy riff and the vocal settles in accordingly. The Pavement and Malkmus celebratory brigade then wastes no time in presenting itself and the lop-sided melodies scream out to an alt-rock past with ease…and as Heyrocco burst into a noisy chorus aided by many distortion pedals, it’s like an instant trip back in time.

Some of the material is far from perfect, but the best bits of this six tracker suggest that Heyrocco are still among the best at their chosen brand of revivalism. Of course, the Brendan Benson produced tracks leave the rest in the shade…but looking at the bigger picture, having the approval of such a gifted cult producer only be a good thing. It looks great on the band’s CV, possibly even allowing the potential to attract a wider audience. Overall, ‘Waiting On Cool’ isn’t as coherent or consistent as ‘Teenage Movie Soundtrack‘, but as stop-gaps go, though, it’s well worth hearing.