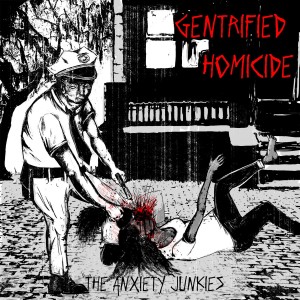 Released in May 2015, Anxiety Junkies’ debut album ‘Self Sabotage’ was a low budget but well accomplished foray into hardcore punk, presenting a bunch of short and sharp tunes that really drove home the band’s DIY leanings. Barely a month after release, drummer Alex moonlighted with Forced Entry, giving an insight into how – although miles from DC, New York and other places readily associated with hardcore – Georgia, too, had its own burgeoning scene. Exactly one year on from ‘Self Sabotage‘, the Junkies made a full return with ‘Gentrified Homicide’, an angry politically charged release that takes in a few more influences than before.

For the release opener, ‘Knife Fight’, they sound incredibly pissed off after colouring their hardcore intents with a layer of distortion across the vocals and tempering their fastest intents with a harsh, galloping rhythm. The new approach to vocals doesn’t stop there, continuing into ‘The Grey’, an aggressive stomper that at first puts Anxiety Junkies in the same frame as an old Sick of it All number – all big boots and grinding riffs – before switching gears to accommodate a chorus that’s harsh, allowing Alex and guitarist Charlie to thrash it out. Feeling the need to take things to more of an extreme, the sub-minute ‘My Fault’ uses a buzzsaw guitar sound for maximum sharpness, with an almost Dead Kennedys-esque surf ‘n’ sneer, before exploding into a frenzy of distorted noise that’s more of a throwback to the previous AJ release crossed with influences from the UK’s Subhumans and Discharge. Within this crop of songs, rhe energy within the band is immense; the playing fast and hard enough to take on several like-minded bands and come out on top.

‘NTL’ kicks off with a surprisingly melodic riff with a clean tone, but pretty quickly descends into a swamp of hardcore punk sounds that borrow from Minor Threat as well as the porno-core noise of the Nobodys. Throughout the track, it’s Alex who is the real star, showing off some impressive snare work, while the rest of the band adopt aggression over comfort. A harder vocal sound also results in one of Tyler Mills’s strongest performances; all things considered, this joins ‘My Fault’ as one of the release’s stand out tracks. ‘Gemstones For Rent’, meanwhile, has more of a demo style, leading to a much flatter sound for the rhythm section, but this is made up for by a killer riff that comes straight off an early Circle Jerks disc and ‘Accuser’ splices straight up hardcore thrash with a pointed riff that threatens some ska chops…but never entirely sees them through. In terms of kitchen sink approach this track is a winner, even finding time for a slow, almost doomy riff that settles somewhere between early Black Sabbath and side two of Black Flag’s ‘My War‘.

‘Stompin Shit’ swaggers and stomps slowly, presenting something more mature than the Junkies have previously attempted. The guitar riffs are tough and assured, but soon get a touch repetitive. It’s good to hear them branching out, but it’s no match for their more Discord Records influenced noise… Fitting more riffs into short durations, ‘Sunny Day’ slays with a distorted noise-fest that’s got all the finesse of a rusty blade, delivering early hardcore influences with ease; ‘Big Fat Spider’ thrashes about for some big dumb fun, all before the band’s big finish, ‘Wastleland Warrior’ provides a real workout for everyone. Taking the Junkies’ better sounds and pushing them beyond two minutes without diluting the result surely wouldn’t be easy, but faced with the task of shaking things up and delivering a few more distinctive riffs, guitarist Charlie owns this piece. There’s hardcore aplenty, a touch of skacore swagger and a nod to metal that all comes together to drop a four minute epic that has all the hallmarks of a Gorilla Biscuits at their most uncompromising and even more besides.

‘Gentrified Homicide’ has a more distorted and brutal sound than anything recorded by Anxiety Junkies before and is also more varied, but these factors never masks their true roots. The fearfully low budget, of course, just makes everything so much more intense. The whole album moves at a breakneck speed, squeezing thirteen numbers into just over twenty five minutes, so if you’ve never heard the band before, this is as good a place as any to jump in…possibly with fists clenched and best circle pit arms at the ready!