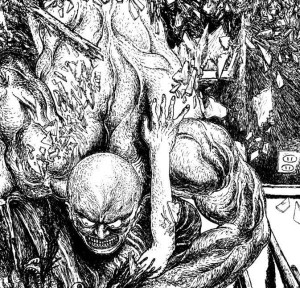 The state of Georgia, USA: while home to REM, Indigo Girls, Baroness, The Allman Brothers, Sevendust and countless other bands, it’s not always the first place that comes to mind when you think of hardcore punk. However, by the mid ’10s, Atlanta had forged itself a fairly sizable underground scene. In Savannah, one of a few circles of hardcore bands can be found as part of a very close-knit community. Anxiety Junkies released their first full length to high praise from DIY punk blogs and the like, as well as playing regular live shows. As part of the Savannah crowd, Forced Entry could also be discovered making noise on a minuscule budget. Bringing together ex-members of Sauna Heat and Gym Shorts, their debut cassette – appropriately titled ‘CS’ – captures approximately fifteen minutes of pure fury.

Housed in a pencil drawn sleeve, reminiscent of works by Crass and various other early 80s DIY outfits, ‘CS’ makes its intentions very clear from the outset. These twelve numbers, most clocking in around the minute mark, make the early Sick of It All recordings sound like they’ve been sent off with the loving polish of Phil Spector’s collaboration with Ramones. In terms of rawness, these tunes capture the purest essence of the hardcore band, much in the same way the first EP from Genovia Forever came like a lightning bolt from nowhere.

With a quick burst of feedback and a thrashing of cymbals so frantic you’d almost think it the work of two drummers, ‘Stomp’ best presents the most extreme end Forced Entry’s primal noise. Although the raw recording means most of the vocals are lost in a distorted haze, their musical intentions are laid bare for all to see: the rhythm section is ferocious, the voice absolutely unhinged. Showcasing something tighter – though never less intense – the fifty-nine seconds of ‘Police’ is a howling rage, driven by a fast four-four snare beat, laying a firm foundation over which Alex Raffray’s throat-rawing vocal spits each word with a scattergun anger, capturing the ugliness and pure octane thrill of early 80s DC hardcore. Attacking with a similar speed, ‘Fake City’ allows the bass to cut through the analogue wall of noise, and the playing is terrific. Busy fretboard mangling, bottom string rattling brilliance; it’s worth keeping a close ear, as this really provides the heart of the number, even though – on surface level – the buzzsaw guitar work and furious drums appear to be the force of pretty much everything.

‘Chump Change’ is even better, powered by a buzzsaw riff and shouting gang vocals tapping into Minor Threat territory. A brief squall of feedback sets the scene; the band explodes into life and within forty seconds they’re burnt out, but the intensity is terrific. With a slow riff to start, ‘Laugh’ allows the bass to make a fairly menacing statement, before the band quicken pace to a classic hardcore speed. On this number, Alex’s throaty rawness sounds completely impassioned, even if the message the song carries is buried under distortion and haste. For bass playing, ‘Water Tank’ brings another stand out moment, as the interplay between bassist Michael Yonker and drummer Brian Allder borders on the utterly frantic. The band’s title song brings much more of the same, before teasing with a slow, grinding riff, and ‘Mental Health’ powers along with a riff that would make the likes of Government Issue proud of the short but important legacy they left behind. ‘In Your Home’ sets out making the listener think we’ve come to a finish with a slower number, dropping in a classic chugging punky riff. Over this, the vocals are rougher and perhaps even more distinct (although pulling any discernible lyrics still poses a challenge). Forced Entry’s slowest approach still makes fairly spiky fare, and as the verse reaches its inevitable end, it’s full speed ahead into a generic – though still enjoyable – cymbal crashing, drum smashing, throat hurting frenzy, as if the band can’t stretch beyond a minute thirty for fear of losing purity.

It’s fair to say that in terms of DIY hardcore punk, Foreced Entry don’t bring anything new, but then the genre is never about reinvention. The brevity of playing time only heightens the feeling of general ferocity – and when speed and intensity are your two main musical assets, going for the “short, sharp shock” approach can only result in a major win. Sure, it’s rough as fuck, but the hard snare sound, the band’s refusal to kowtow to melody for any extended length of time and a bucketload of attitude are enough to make Forced Entry’s debut cassette broad in appeal for fans of very old-school, traditional sounding hardcore.