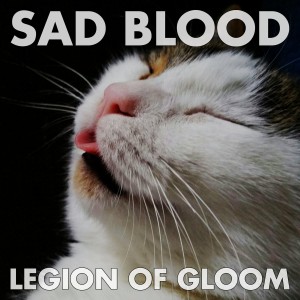 London-based emo outfit Sad Blood knew they had to follow their ‘Ultimate Warrior’ release with something special; a release that improved on their core sound and didn’t just feel like a retread of previous work. The resulting five tracks are somewhat special – hearing ‘Legion of Gloom’ (especially for the first time) is akin to taking a trip back two decades. A couple of chords is all that’s required before opening track ‘Heavy Petting Zoo’ – a tune absolutely drenched in a feeling of revivalism – is set to impress listeners who once found themselves enamoured with nineties emo.

With George’s full sounding and pleasingly simplistic guitar work wholly reminiscent of Bob Mould (at his more melodic) and Texas Is The Reason it has a great grounding, while vocally, this number also scores highly with an extensive use of harmonies and a very melodic bent throughout. Although ‘Heavy Petting Zoo’ represents brief look into the workings of the band at under two minutes, it doesn’t ever feel like more is needed. The way everything hangs together shows the work of a band who’ve really laboured at their craft to get things just right and in terms of the style, it doesn’t come much better than this.

It’s not a one shot deal, either: the rest of the EP is just as captivating. ‘Formerly Creative’ couples a confident vocal with a choppy guitar line, and while the song’s protagonist drops us in at the deep end with the idea that he’s “obsessed with depression” and “awake at 4am”, any potentially depressive slant is counterbalanced by a great musical arrangement, which quickly blooms into a particularly sunny sounding alt-rocker. With hints of the mighty Sense Field throughout, the trio sound consistently tight, while an instrumental breakdown allows drummer Daniel to come forward with a more percussive style, adding a lighter moment for some essential balance. Driving forward with a thickly toned guitar jangle, ‘Audibly Bored’ at first appears to be the simplest of the five tracks, but closer inspection reveals some great playing, with bassist Krys dropping in some really heavy, fat sounds, while another melodic vocal provides constant entertainment. At this point, with the material starting to really get under the skin, Sad Blood sound like the one of the best nineties-infused bands you’ll ever hear.

The mid pace of ‘Ten Years Gone’ allows for plenty of ringing rhythm guitars, at first coming across like Teenage Fanclub on a downer, before branching out to reveal handclaps and more fine bass work, entwined with an aching harmony that should tug at the heartstrings of anyone who happened to hit their twenties in those plaid-filled days of 1995. With a thicker sound via some dense guitar lines, ‘The Worriers’ settles somewhere between the melodic side of Fugazi and an old Foo Fighters b-side, with George raising his voice accordingly to accommodate some rockier sounds during the climax, but despite an overall increase in heaviness, Sad Blood still show off some great musical hooks, never losing sight of their overriding emotive core.

While the music may strike a chord with fans of the nineties emo movement and despite a very provocative title. this isn’t an depressingly introspective work; so often, far from it – the vocals and increased attention to melody constantly makes these songs oddly uplifting. The chorus hooks are strong and the way everything comes together is pretty much faultless, making ‘Legion of Gloom’ as essential as the overlooked works of Shift, Sense Field and Sunny Day Real Estate. Nostalgia rarely sounded so good.