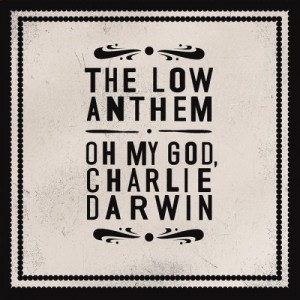 ‘Oh My God, Charlie Darwin’ is the second (proper) release by the Rhode Island based folk/Americana trio The Low Anthem. It doesn’t always sound like an album which is capable of reaching huge audiences, but with the resurgence of traditional sounding music which happened throughout the late 00s, it has the air of an album which needed to be recorded. The playing throughout is very natural, which alone creates a rootsy, homegrown feel. Essentially, what we have here is an album of tunes to fill the empty space during cold and dark autumnal nights: songs which are often reflective and occasionally whiskey filled.

The Low Anthem are at their best when they weave musical pieces with pastel shades. ‘To The Ghosts Who Write History Books’, driven by pump organ and upright bass is simply gorgeous. The drone from the organ adds warmth and Ben Knox Miller’s vocals are gentle and full of longing throughout. The gentle approach captures a style which appears very natural for The Low Anthem, and by the time the ambling, heartfelt music is overlaid with a Neil Young-esque harmonica solo, ‘Ghosts’ feels like a song that you’ve always known; as much a song from the late 60s as one written in the 00s. Never more was the phrase “timeless quality” more apt.

‘Ticket Taker’ has the kind of sparseness which would impress Howe Gelb (and it must be said, some of the material here owes a great debt to his works with Giant Sand). A soft acoustic guitar is complimented by almost equally under-usued upright bass, while a husky, almost spoken vocal carries a very narrative feel, all delivered with the kind of flair that really gets under the skin. Echoed voices and a live recorded sound inform ‘Cage The Songbird’, a song that could be centuries old with a very traditional feel. Although the reverbed sound makes the vocal sound detached at times, the melody – much like ‘Ghosts’ – has a haunting beauty and the harmonies are lovely, if a little underused.  Adding a mumbling and trembling delivery to some already familiar sounds, with harmonica and a vocal delivered in a trembling mumble ‘(Don’t) Tremble’ plays up to the backporch feel of the album with a gentle air, while ‘To Ohio’ could equal Pete Droge’s more reflective moments, with its simple acoustic arrangement and subtle harmony vocal. In short, every one of these quieter songs adds up to making ‘Oh My God, Charlie Darwin’ a worthwhile listen for anyone interested in Americana styled music. Rarely has the fusion of folk rock and roots music sounded so good since Robbie Robertson and Rick Danko gave the world those timeless songs from the first two releases by The Band.

Of the album’s louder material, ‘Home I’ll Never Be’ is a stomping, slightly raucous affair, where the banjos and percussion take a huge step forward. The Tom Waits style rasp won’t neceaaarily be to everyone’s tastes, but here, it appears to be the perfect vocal choice. The approach works to an even better degree on ‘The Horizon is a Beltway’, where The Low Anthem tears through a spit and sawdust romp, full of alcohol-inspired shoutiness. The lyrical repetition has the possibility to wear thin after a while, but in terms of creating something a little rawer and rousing, it’s a decent number. The rock edged ‘Champion Angel’ feels like a rootsy version of Jakob Dylan’s band The Wallflowers (particularly in the vocal department), driven by a bass drum and reverbed electric guitar. While the full introduction of drums brings a rockier edge – especially so with an over-reliance on the cymbals – this has less of a heart than some of the material, but due to the band’s well-rounded talents, it doesn’t feel particularly unnatural for them to be cutting loose in this way. The ugly harmonica solo isn’t especially fitting, but to say it spoils the track would be somewhat harsh.

Although it features a couple of near misses – the title track, particularly, being an all round forgettable affair made worse by the inclusion of unnecessary falsetto and ‘Music Box’ presenting a music box tune as deliberate filler – ‘Oh My God, Charlie Darwin’ is a great record. It may not always appear to be as consistent as work by the more commercial Fleet Foxes, or always retain the polished qualities of Richmond Fontaine’s ‘We Used To Think The Freeway Sounded Like a River’, but it’s almost certainly a record where it’s brilliant moments surpass even the best work by the band’s closer peers. For fans of Americana and roots music, ‘Oh My God, Charlie Darwin’ should definitely be added to the rostrum of essential listening.