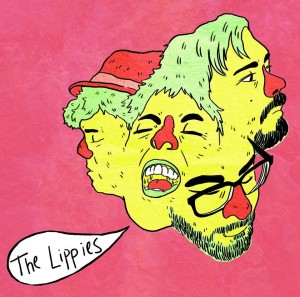 This 2014 EP from The Lippies brings punk rock aplenty, sharp feminist attitudes and even sharper arrangements across six tracks for a brief, but thrilling listen. Although very much a DIY affair, it’s got a fantastic sound quality and production value, meaning right from the get-go the talent within this music unit can be heard so clearly. …And this is a good thing: although so much punk benefits from a fuzzy, lo-fi attitude, it would have been a shame if these songs – and the bass sound which drives them, in particular – had been lost due to a muddy end sound.

‘Drop Off’ opens with a sharp rhythm, with guitarist Taylor Shupe driving a riff at a decent melodic punk pace, backed by drummer David Sparks bashing a hi-hat. Possessing a reasonable power, pivotal to the constant driving pace and a familiar quality akin to The Ruts’ ‘Babylon’s Burning’, it’s quickly clear this is going to be a good – perhaps even great – track, but this melody is swiftly usurped by the aforementioned bass playing, and an absolutely strident vocal. Ensuring The Lippies’ full (and surprisingly professional) sound isn’t let down at the last second by a misjudged and tuneless voice, band mouthpiece Tonia Broucek gives her all with a performance that conveys a huge power and range, topped with a little vibrato carrying each note. This is fantastic, hard-edged melodic punk, showing each band member is capable of adding something of high quality to the performance. Bringing an even more tuneful approach, ‘302’ is an instant standout, as the intro brings one of the greatest bass sounds you’ll ever hear, Lawrence Kole’s general musical stance is fierce and live sounding, while the drums are loud and measured; the perfect pop-punk rhythm section is then lifted further by the live sounding production value. The guitar riff doesn’t attempt to be flash, instead topping the solid rhythm with another tough tone throughout, while the vocals are assured, but without slipping into either brattishness or cliché. As before, Tonia shows off a great voice – not necessarily in range, but very much so in terms of presence.

In under two minutes, the aggressive ‘Beat It Into Me’ shows off The Lippies purer punk abilities with a full-on, crashy affair that throws out the melodic vocal for frenzied shouting over an arrangement that invites maximum pogoing. In a minute forty-five, it’s not only all over bar the shouting, it’s all over, period…with The Lippies stopping short of utterly breathless. The ultimate punk ode to feminism, ‘Thelma & Louise’ captures a slow a rhythmic verse dominated by vocals, before exploding into a celebratory sounding and rousing chorus where – once again – Tonia shows off a really belting edge, while the pumping bass sounds carry everything to victory. The style hinted at throughout ‘302’ really comes into its own here, resulting in a tune that should be very broad in appeal for those who often seek melodic punk thrills. Next up, ‘Sidewalk Talk’ couples a tough voice with a solitary bass before exploding into a brilliantly punky chorus, the contrast between the loud and quiet subtly recalling the nineties riot grrl sounds that lurk at the heart of The Lippies’ attitude. Throw in an extremely spiky mid-section before bringing everything back for an angry climax and it’s yet another track that nails its goal with ease, before things come to a close with the infectious Paramore-esque ‘Take a Ride In My Hot Air Balloon’, mixing sharp pop-punk chords with an emo cool and killer vocal.

There it is: a brimming talent in just six songs; no filler, no weak points, just superb performances. The bulk of the sounds may be instantly familiar, but you’ll be hard pushed to find this style delivered any better, making the EP a must-have for fans of melodic punk rock. ...And for Lippies, having pulled the plug prematurely in May 2016, this represents the beginning, middle and end of their studio work. It’s a pity the world will hear no more.