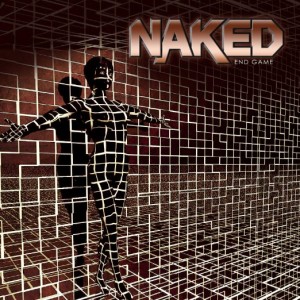 ‘Silverthorn’ gets things underway with something potentially quite rocky, but a truly terrible production job courtesy of Naked’s guitarist Tony Borg (also of Alien) sucks all the punch from the arrangement. His rhythm guitars sound treacly, as if listening on the morning after a gig without earplugs, while the drums sound more like a man whacking a kitchen worktop. The vocal, meanwhile, is nice and clear, with frontman Peter Sundvall attacking each line with an approach that occasionally sounds a little like Steve Walsh of Kansas. That could be a good or bad thing depending on your personal taste, but at least he has presence. Things only really improve when Borg steps up for a solo – a guitar break that’s both melodic and relatively powerful in a very 80s way. Louder than pretty much everything else within these four minutes, it’s clear he adopted a personal bias when sitting behind the mixing desk. ‘Aim For The Heart’ is a midpaced workout that falls somewhere between the Bon Jovi debut, early Harem Scarem and a billion and one Scandinavian bands. With a simple but memorable hook and some nice twin leads, it would be more than passable as a piece of melodic rock of the tried and tested variety, if only it didn’t sound like mud.

By track three, ‘Blood of My Blood’, things have become so predictable that Naked border on being rather boring. Tony Borg drops in a reasonable solo, but it’s nowhere near enough to lift the spirits of what’s essentially a lumpen plodfest; the arrangement is made even more stodgy by a mix that suffocates nearly everything except the vocals and lead guitar. There’s a hint of harmony vocal midway, but the backing is so swampy there’s nothing interesting coming through at all. By three minutes they should be done, but there’s another two minutes’ worth of Sundvall wailing the title repeatedly over vibrato guitar. Give it up, guys; move along. Following a quiet intro that suggests a big ballad, ‘Victoria Avenue’ quickly thunders from the gate with an arrangement that mixes thick rhythm guitars with a blanket of keys. As before, none of the finer points of the recording are even audible and the drums thud almost in the fashion of a programmed rhythm track. Borg’s lead guitar work more than passes muster in both performance and mix (surprise, surprise) but it’s never enough to save face.

A little embarrassing, ‘The Great War’ kicks off with a pompous riff, before Sundvell starts wailing about casualties on the “end of days” where “no-one escapes” and suggests “we’re only soldiers of the line, running out of time”. Cliched rubbish that trivialises human travesty, this is chest-beating trash. This does for the pals’ brigade and the King’s shilling what Gary Barden‘s ‘Baghdad’ did for world politics. It would be laughable, if not so tragic. Even at the point where the bombastic riffs fall away for a more thoughtful mid-section, there’s no emotion with which to grasp a hold; once again, we have that frankly awful production to thank. …And here’s a useful tip: bands need to go away and listen to Magnum‘s ‘Don’t Wake The Lion’ and Motorhead’s ‘1916’ to hear how The Great War can be encapsulated within song and manage to be thought provoking.

Elsewhere, ‘Born To Live For Love’ is a predictable thumper that features a reasonable hard rock melody but totally fails to deliver on a chorus hook and has the funniest backing vocals ever – everyone sounds like they balled-up socks wedged in their mouths, so bad is the mix; ‘Setting Sails’ gives bassist Phil Logue (of Eden’s Curse) time in the spotlight, as he pumps out a solid rhythm, underpinning some reasonable melodies and ‘Still In Love’ is a rocker that’s so fudgy sounding that it’s almost impossible to listen to without getting frustrated; nothing helped at all by Sundvall’s delivery occasionally sounds like Sebastian Bach in a camp mood. All distinctly average melodic rock fare, never more. ‘Destination Unknown’, meanwhile, finally allows a few keys to open proceedings, only to give way to a dull and stodgy arrangement, over-reliant on chugging bar chords that makes most of the Rage of Angels debut sound inspiring…but at least they’ve shoehorned in a pleasing key change for the chorus and the solo is one of the album’s best, so that’s something.

This album is the poster child for melodic rock averageness. There’s very little spark and absolutely no imagination. The band are literally phoning most of it in. Where is the “fresh slant” promised by the press materials on this “release chock full of surprises”? Nowhere to be found. This is Scandinavian AOR by numbers, terribly mixed and chucked out in a manner that very much suggests demo recording. For something featuring a member of Alien, fans should expect more.