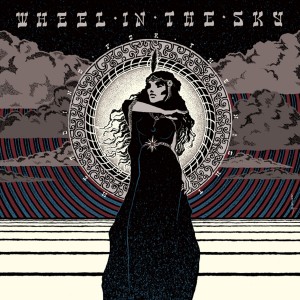 With the opening track fading in with a clean toned guitar and almost folky lilt, you could at first assume we’re heading into Zeppelin territory, as the first atmospheres of the LP sit somewhere between ‘Going To California’ and an early Mike Oldfield piece. Once that’s faded all the way in, however, things change tack completely with the band hitting upon a retro riff that’s amped up like something from an early Blue Oyster Cult LP. That riff, simple as it is, has a presence and almost timeless appeal, and musically it’s hard to find fault. Production wise, things are a little woolly and in the vocal department, the performance rarely seems to move from untrained shoutiness, but the music is good enough alone to sustain entertainment – particularly during an echoing mid section where the old fashioned vocal wails occasionally hint at a sound that could be Ian Astbury singing in the bath. It’s a track that aims high, but often ends up middling: partly due to a lengthy duration, partly due to a frontman with a very unsettled approach. Better, ‘Jezebel’ is a three minute belter that sounds a little like The Cult revisiting something by Blue Cheer and the fuzzy tones almost make it impossible to tell when this was recorded. With a simpler musical backdrop, the vocals appear much more melodic, too, and by the mid-point of the track where the band – probably unknowingly – hit upon a chord progression that’s a dead ringer for Mother Love Bone’s ‘Chloe Dancer’ and the rock vocal gives way to a scorcher of a solo, there’s little doubt that – despite a few rough edges – Wheel In The Sky can really hit the mark when the mood fits.

Opening with a garage rock riff that sits somewhere between Blue Oyster Cult and The Stooges, ‘Rainbow of Evil’ isn’t a tribute to Ronnie James Dio’s formative years, but a dark tale of orange skies and badness looming. Both musically and lyrically, the band’s general love for early BOC is unavoidable and with that opening riff rarely letting up – working something that’s simplistic, repetitive and mastered loudly – this number best sums up the basic sound of the band. Granted, the song writing is a bit iffy and the chorus worse, but musically, this presents yet another step forward. That musical simplicity is part of what makes the bulk of this number so likeable upon first listen but, for those looking for a little more, a quiet interlude with soaring guitar sounds, a touch of psychedelia and a few twin leads seems happy to oblige. In all, a very pleasing slab of shamelessly retro rock despite the lyrics – and finally, it seems as if the band have found a tone and style that best befits their frontman. The same old fashioned charm works well throughout ‘Thrust The Night’, a hard rocker driven by thumping drums and chiming guitars. What Wheel In The Sky lack in finesse, they make up for with general drive. A number that sounds like it’s best destined for in-car entertainment, the seventies gruffness combined with a busy guitar solo are all that’s required to make this a reasonably entertaining rock tune, even if it isn’t particularly original.

Elsewhere, ‘Total Eclipse of the Brain’ starts out with some unexpected hi-hat flair, before dropping into the kind of no-frills rocker that at first seems to be an inferior retread of’ Thrust The Night’, but a few spins suggests this late sixties homage is one of the best tracks, being home to the album’s best vocal and solo, while ‘A Turn For The Wicked’ occasionally sounds like a raw approximation of something from BOC’s ‘Spectres’, the combination of tough but unflashy rhythm section giving a good base for some excellent twin lead work. Any feelings that bits of this album bear more than a passing resemblance to Blue Oyster Cult get pounded with a mallet during the last track ‘God On High’. They’ve not gone full out with a mad voiceover or anything like that, but the dirty riffs and – more specifically – the increased usage of twin lead guitars during the closing instrumental jam – results in something enjoyable; something that could nestle easily onto either ‘Secret Treaties’ or ‘Agents of Fortune’. You might even find yourself wondering if this album is even an unearthed, previously unreleased relic from 1975, as the general feel is so authentic. Between the dirty production – here, at last making sense rather than sounding like a budgetary constraint – and spacey verses, with a tiny hint of Hawkwind, there’s instantly something to like. After a hit ‘n’ miss start to the album, Wheel In The Sky go out with all guns blazing, in a manner that pretty much has the capacity to make you re-think everything you’ve just heard…and indeed, a repeat listen to the whole record suggests it’s all been better than perhaps you originally thought.

Whether it’s the indifferent vocals or the slightly lacking production that’s to blame, the jury’s out, but as it stands, this isn’t an album that’s likely to grab instantly. Overall, though, ‘Heading For The Night’ is very good; there are certainly more than enough reasons to give it a thorough listen. Some parts of it – like the last track, with its aforementioned sledgehammer BOC-isms – are even bordering on being excellent. You might not think so at first, mind…this is very much one of those albums you need to give some dedicated time; only then does the potential really starts to seep through. With this recording, Wheel In The Sky brings a worthy addition to any record collection dominated by classic rock sounds – just don’t expect to be thrilled on first hearing…