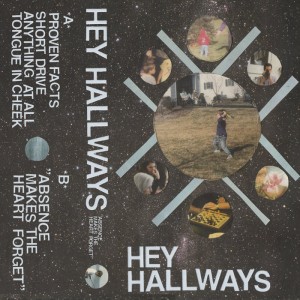 The sound of a buzzing amp, a loud bass tuning and the scratching of a fretboard opens ‘Proven Facts’. Despite that bass sounding as if it’s right at the forefront at that very moment, once the band launch into the song, there’s seemingly hardly any bass at all, with clanging rhythm guitars in heavy dominance, while a naturalistic vocal fights its way through the crashy sounds. Here, regardless of the general lack of finesse, we experience a hugely spirited outfit, one keen to pay homage to similar sounds of the early nineties. In and out in under two minutes, there’s no room for flabby excess – if the ‘Flip Your Wig’ era Husker Du had put out a release on Taang! Records (home to the early Lemonheads, Mission of Burma and Spore) it might have just sounded something like this.

Even punkier, ‘Short Drive’ works itself around another frenetic drum line and a melodic bass. The lead vocals are drawled like the youthful Evan Dando having a particularly tricky day (euphemism), but retain the core of a tune that’s more than memorable. The key point comes with a compliment of muted guitar rhythms adding a great deal of choppiness between verses, which again, has a ferocious energy. Although the vocal could perhaps do with a little tightening, in garage punk terms, it’s more than obvious what Hey Hallways are aiming for…and with this two minute belter there’s still much to enjoy. ‘Anything At All’ opens with a stark and open-hearted spoken word intro, the protagonist plainly celebrating the arrival of a significant other and then with a hefty squeal of garage rock feedback, the band explodes into another full garage punk frenzy. As before, the drum sound is absolutely immense, its wall of crashy cymbals threatening to destroy, while the guitars hammer chords at a fair rate, despite holding back a touch to ensure the necessary tunefulness. Plenty of distortion masks a noisy college rock melody, while a great bass line and scorching guitar solo tops everything off excellently. Showing a different tone from the outset, the production values of ‘Tongue In Cheek’ are improved – someone having seemingly decided to move the microphones farther away from the drum kit. Other than that, it’s business as usual with a hard clanging rhythm and a vocal melody that sounds like a raucous relation to the earliest Buffalo Tom. Moving into the close, a brief interlude full of warm bass and muted guitar chords suggests there’s tighter musical abilities within the band than at first appears…and it’s enough to make you wonder how they might have sounded with a proper recording budget at their disposal. It could be better…but on the other hand, cleaning up these songs and removing their ramshackle approach may also rob them of their heart.

Expecting more of the same from side two, you might find yourself short changed. In a frankly bizarre move, the whole of that second side is taken up by the title track, some nine minutes worth of extremely lo-fi acoustic guitar twiddles. It’s intro combines hard garage-folk rhythms and a simple lead riff repeated for effect. Moving forward, wordless vocals add atmosphere and by the time this has completed its cycle within a couple of minutes, things become a little more fragmented. There are more riffs – this time a little less focused – other twiddles, spoken word passages, noodling fuzzed up electric leads and a fair amount of background hiss. The realisation that this isn’t a complete work at all, more a selection of musical sketches pieced together for posterity brings a strong link with Lou Barlow’s lo-fi experiments with The Sentridoh.

Devotees of Barlow’s tape deck experiments and various Guided By Voices offcuts will almost certainly find the extreme DIY approach of the second side fascinating, but for others, this will remain a one-sided affair. But, of course, ‘Absence…’ is worth checking out on the basis of that first side alone – its four pieces of garage punk careening almost carelessly in places, but even so, those songs show a rough but lovable talent.