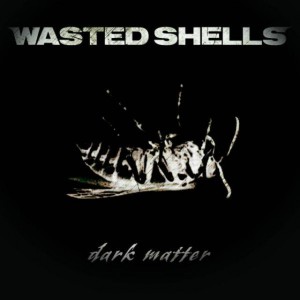 With roots that stretch back as far as 2006, Sweden’s Wasted Shells had various line-up changes before jelling into a more cohesive unit in 2010. Albums followed in 2011 and 2013, between hundreds of live shows, each move a step closer to perfecting the band’s metallic assault. Their third release – 2015’s self-released ‘Dark Matter’ – is a veritable half hour of power.

With no stalling, ‘Tox’ starts things off with a wall of double bass drums and top notch riff, the kind of which Machine Head weren’t shy in their earlier days, but after a few bars, things take a sharp left turn with a teasing of post-rock atmos, before finally settling on a riff that, although a little deeper, borrows from classic, classic thrash. The vocal has a gruff nature – akin to so much other Swedish metal a la In Flames – but the basis of the track, and that riff, is so much like Testament and their ilk, it should appeal to two generations of metal fans. An epic starting point with the band wedging so much into just five minutes, it peaks with some great lead guitar work and the re-introduction of the pneumatic bass pedals, very much feeling like we’ve come full circle. With a stronger influence from the groove metal sphere, ‘Masterplan’ brings more great riffing and a solid arrangement, but the slightly throaty vocal – closer to Mastodon than the classic metal approach – might not appeal to all. No matter, though, as moving into the chorus things become more melodic, thanks to a cleaner vocal put through a couple of filters for a slight Fear Factory homage. Throughout, the music is strong enough to see everything through admirably. The twin guitars of Johan Svensson and Marcus Skantz offer a weighty tone, underpinned by solid drum work courtesy of Jonathan Senno and the increase of muted riffs very much adds to the heaviness. The inclusion of two sharp lead guitar solos – one of the traditional 80s variety, another full of quasi-harmonious anger – tops everything off fantastically, before everything drops into a crushing, slow riff and Ola Svensson pushes his voice to the limit.

If you are unconvinced by the first couple of tracks, ‘Lies’ branches out a little farther, with Wasted Shells throwing a couple of extra tricks into the mix. The main riff is a mid-paced chugger, as heavy as Machine Head with the kind of pace and ominousness of a post-metal band – especially during the track’s second half when they wheel out a juggernaut of a riff and overlay it with a crisp guitar intoning an almost gothic atmosphere. There are more than a few nods to classic 80s thrash once more, expertly played and with a near-timeless appeal, but it’s the chorus sections that truly impress, where the band cast aside all heaviness, focusing instead on a thinner, gothy sound where the vocals carry a huge amount of the melody and the multi-tracked guitars pick out tunage of an almost equally strong nature. With the guitars taking more of a back seat, it’s much easier to pick out the contributions from keys man Kristoffer Ling, here opting for an unobtrusive stringed sound. Linking all the pieces together are a couple more minutes’ worth of classic thrash, so it really is a number with a little of everything for the more demanding metal fan. With yet another powerful riff to start, followed by a foray into thrash with a full on vocal roar, ‘Breathe Out, Breathe In’ at first sounds like it’ll bring more of the same. …And then the chorus hits. The combination of busy drums and clean vocals is very smart. With those vocals subjected to a couple of studio tricks and the slow, almost alternative slant, it’s hard not to think of ‘Come Clarity’ era In Flames, which – obviously – is a good thing. By the time the lead breaks roll around, there’s a different approach there, too, with soaring, almost eastern sounding notes gliding atop a very slow riff. Closing with a crushing riff that could slide into doom metal at any given time before the fade, this has been, in all, fantastic stuff.

Taking a brief rest from the riffs, ‘Today (The Edge)’ is a slow and thoughtful number – the lightest of these half-dozen – where the band delve even farther into the gothic. The guitars adopt a clean tone, the rhythms steady and thoughtful. The addition of soft voice makes everything sound like a marriage between In Flames circa ‘Siren Charms’ and ‘Thirteenth Step’ style A Perfect Circle. The leather jacketed, mullet sporting die-hards might cry that it’s all become a bit too alternative, but it’d be their loss. The introduction of a huge metal riff gives this number the perfect sense of light and shade and the featured solos have an absolutely superb tone. It would be fair to say if you enjoy post-‘Come Clarity’ In Flames or Paradise Lost, the potential for enjoyment during this number is very high. Leaving their audience with an atmospheric workout, ‘2215’ owes far more to My Dying Bride than anything else. A dark atmosphere is slowly built up on a drum-free number, as crooned vocals and clean guitars take the bulk of the work. With a keen ear for melody, the vocal line remains memorable, but it’s the combination of these elements with a simple piano motif that really brings this track to life. It shows that this release is more than the sum of its many (excellent) riffs.

Huge riffs, dark melodies and heavy songwriting, all driven by a vocal fierceness: these six songs present almost everything you’d want from a metal album. It may have taken the band a while to get to this point – with false starts and all – but with ‘Dark Matter’ Wasted Shells sound like they’re ready to take on the world. A tragedy, then, that this would also be their swansong… With so much potential, it’s hard to say what might’ve happened next, but as they say, good things never last forever. At least they left us with this should-be cult classic.