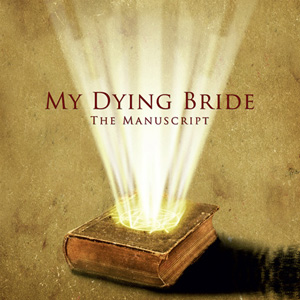 Twenty years into a career of cult stardom, this four track release from Yorkshire’s My Dying Bride continues their ongoing voyage into sludge rock and doom rock territories. Clocking in at over twenty seven minutes for just four songs, some of you will own supposedly full length albums which are barely any longer (Van Halen back catalogue, we’re pointing the finger at you), but despite the extended nature of the tunes, none ever outstay their welcome.

With just a few notes passing as an intro, the band waste no time as the title cut lurches from the speakers.  A typically heavy riff sets the tone and frontman Aaron Stainthorpe adopts a rather fine croon; the sludgier elements are counter-balanced by a cinematic sounding violin part, at once lending a sense of the gothic.  Eventually sounding like a cross between classic Black Sabbath and Type O Negative (albeit without any of the cartoonish, tongue in cheek silliness), these six and half minutes fly by, where a lesser talented bunch could easily be lost in a musical swamp.  The closing segment picks things up rather nicely via the inclusion of a more accessible riff, before fading out with a short burst of almost medieval picking on an acoustic guitar.  In a harsh shift, ‘Var Gud Over Er’ is at first more aggressive, with the gothic moods giving way to a slab of melodic death metal.  While the throaty growling voice is not going to be to everyone’s tastes, in terms of the musical performance, the band sound rather masterful, with  Dan Mullins (now credited as a session drummer) cutting through a mid-paced beat with some decent double bass pedal work.  It’s such a pleasure to hear a bass drum used properly, as opposed to someone relying on a trigger/sample.  As with the previous track, Andrew Craighan and Hamish Glencross take the weight of the tune, indulging in some rather fine twin lead work, with everything downtuned in a superb Sabbath-esque tradition.

Potentially the best track, ‘A Pale Shroud of Longing’ offers louder drumming over an almost monotonous riff, before dropping into a quietly gothic atmosphere, as bass and cleaner guitar sounds mesh with a wandering violin. Stainthorpe, meanwhile, reverts to the croon which made the title cut so appealing, managing to maintain a presence over the sludgiest of riffs – a riff which peaking around the four minute mark, is intense enough to make The Melvins sound like Winger.  Although the quieter moments are brief, it is this contrast – topped with the violin – which sets My Dying Bride apart from other doom/sludge metal acts.  First time listeners should make this track their first port of call. Closing this epic four tracker, ‘With Only Tears To Replace Her’ is as melodramatic as its title suggests.  While parts of the number are dominated by typically doom laden riffs, the core of the piece centres around a quieter guitar part and a spoken word vocal.  It could have ended up with a sense of the ridiculous (as per ‘Witness to a Murder, Part 2’ from Mansun’s ‘Six’, or even the stupidly pompous middle section of The Doors’ ‘The End’), but somehow these guys appear to approach it as naturally as possible – well, as naturally as such theatrics will allow. Stainthorpe’s northern accent gives the words a sense of the ordinary where perhaps a US performer would be in danger of hamming thing up unnecessarily.  Musically, of course, it’s business as usual, with the band lurching slowly across four minutes – leaving us with a typically bleak thought: “Bacchus has drowned more men than Neptune…and I…hate everything around here.”  With that, there’s no denying this band’s musical approach comes with an almost unrivalled sense of presence.

These four tunes tread a fine line between epic and overblown, but each has a plethora of classic metal moments, often heavier than the band’s 2012 outing ‘A Map of All Our Failures’.  In fact, this EP only has one minor flaw: the snare drum sound is too quiet.  Even played through a set of 1970s Bose speakers in wooden cabinets (through which Black Sabbath’s ‘Master of Reality’ sounds suitably monolithic and jaw-dropping), the rhythm section is often drowned out by the twin guitars.  It’s a small complaint, however, since those riffs are always going to carry the songs.  Overall, ‘The Manuscript’ provides an excellent companion piece to the previous release, one which long time My Dying Bride/doom metal fans should grab as soon as possible – whatever their audio preferences.