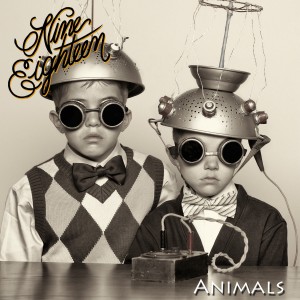 Creating your sleeve art from public domain photos certainly saves on costs, but who knew the kid with the colander on his head was so popular? This EP marks at least the second time in the first quarter of 2016 he’s put in an appearance. To be fair, though, there’s a big musical gulf between the work of Rick Springfield and New Jersey pop-punks Nine Eighteen. Each one hugely talented, but never the twain shall meet, as they say.

The sleeve may be familiar, but the band haven’t skimped on the recording budget for the four songs that make up ‘Animals’, as this is a fine sounding release all round. The production and mastering courtesy of Bill Henderson at Azimuth Sound studios is amazing. His work is almost as good as a Bill Stevenson/Blasting Room recording – especially Shades Apart circa ‘Save It’, in that it’s often slick, but never overly glossy; a sound best befitting four guys who value melody above most other aspects of their craft. The brilliance in the band’s sound is evident from the off, with ‘110 Feet Down’ working a chiming guitar riff before exploding into punchy punk rock akin to Authority Zero, while frontman Mike Vidal adopts a slightly higher register with slight emo twang – a voice that makes him sound a little like a punkier version of The New Trocaderos‘ Geoff Palmer. It’s already great…and then the chorus kicks in with a melody that screams instant gratification and adds some great back-up vocals to round everything off just perfectly. With a bigger punch and an appropriated Ramones-esque riff, on ‘Scream With Me’, drummer Bill Zelenenki gets the opportunity to attack his kit in a heavier fashion, playing harder on the toms to create a solid almost tribal beat. The vocals in turn are gruffer until reaching the chorus where Nine Eighteen go for something that isn’t a million miles away from a great nineties emo band meeting an Offspring melody – though thankfully with far fewer whoooahs all round. The combination of these two styles makes for a very full and satisfying two minutes and the dual vocals just top everything with a sense of class.

‘Wild One’ works a rattling bass and an opening riff that’s not too far from early Face To Face, before the general punky assault drives itself with almost a casual ease. presenting a couple of pleasing chord changes along the way. On first listen, the chorus doesn’t seem as infectious, but time allows all the potential in this number to present itself. The presence of three singers within the band ensures the harmony vocals are every bit as full as on the opening track, while an energetic lead guitar solo adds an extra edge. Last up, the title cut is another number where melody is key and for those who wish blink-182 had never moved on from their ‘Dude Ranch’, this might just provide a little consolation. The lead vocals are perhaps the strongest the EP has to offer, sounding confident as Mike gets the best from each line, all over a superb riff; elsewhere, the guitar riff linking verse and chorus is a perfect example of punk-pop cool and the final melodies – bringing understated gang vocals and a repetition of earlier sounds – end the track very much on a high note. There might be a couple of bigger choruses elsewhere, but these guys make the creation of classic pop-punk sound so effortless.

The hooks are massive, the arrangements bouncy and the guitar sound loud but never intrusive, meaning that the songs always shine. Potentially essential listening for fans of middle period Shades Apart, American Hi-Fi and ‘Building’ era Sense Field, ‘Animals’ may be short, but in pop-punk terms, it’s almost perfect. Grab it now.