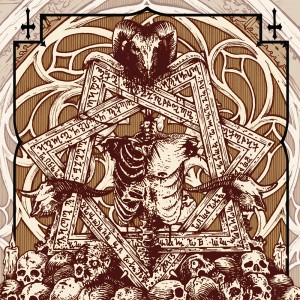 The two unreleased tracks from Drama actually show a great deal of promise. Although at the more extreme end of the metal scale, here is a band who understand that things work best when arrangements are given room to breathe and that distinctive riffs are important in the creation of genuine heaviness as opposed to just sheet noise. A mid paced track, ‘Create Your Death’ works around a chugging riff that could just as easily have appeared as one of the slow, threatening numbers on a thrash metal album from the late 80s/early 90s, but the rhythm guitars retains a thinnish, almost under-produced tone that’s instantly recognisable as belonging to a black metal act. The lead guitars have an equally shrill sound, but also an interest in melody. When Vinsarg starts to sing, of course, any doubts that this is black metal are swept away. His voice is hard and throaty, threatening and overwrought, but surprisingly, it’s still possible to make out most of the lyrics – and that’s something of a major plus. Also working in the band’s favour is the belated presence of some very old school lead guitars, finishing with a solo that’s quite retro, but not too showy. Overall, this is a reasonable track, but its insistence on never really changing pace makes the five and a bit minutes drag a little: it’s good on first listen, but less appealing with each subsequent spin. Moving the solo to the middle would have made a huge difference. Any faults in that track are quickly made up for, however, once Drama’s second track gets firmly underway… Beginning with full scale shredding and pneumatic drums, ‘Gloria Mortis’ at first suggests an unrelenting assault a la Burzum and the like, but thankfully, quickly drops into another rather more classic sounding metal riff for the bulk of the number. With a darker sound and more audible bass work complimenting the ringing guitars, Drama already have plenty going on that might appeal to those who mightn’t instinctively reach for a black metal disc, but by also teasing with a heavy groove and showing a couple of doom influences, they have all the important bases covered. The vocals, of course, still won’t be to everyone’s tastes, but the music is excellent. With the band using almost every second of the eight plus minutes to their advantage, this is a fine example of the style and a real surprise that this track sat on the shelf. It doesn’t come across as being in any way second division material.

It’s lucky that Drama sometimes represent the more accessible side of black metal, since Perdition Winds are bordering on the unlistenable. Naturally, being Scandinavian – the home of the black metal subgenre – they take things to extremes. The band members have no names beyond initials and, judging by the thirteen minutes worth of regurgitation noises they leave behind here, little regard for breaking out or entertaining anyone beyond the black metal purists. The slower and all too brief instrumental breaks during the first half of ‘Cult of Kain’ show some improvement with grinding guitar work bolstered by a hard metallic sheen, while a slow, almost doomy mid section shows they could be more accessible if they really wanted. But, of course, they don’t want, and for the bulk of this epic track, though, we’re confronted by a lightning speed overly pneumatic drum part, with shredding and almost mangled guitars to match. This is overlaid a man who sounds like he’s contracted an illness that’s led to repeated projectile vomiting and a medical team have recorded the results for later research. When tempered with a little more doom, or even tailored with a half listenable voice, black metal can be epic. In the hands of Perdition Winds, however, it’s largely horrible. The least said about this the better, really.

While those with a black metal persuasion might find this interesting, the bulk of this material has clearly been previously unreleased for a reason. While a few might like this EP as a collection filler, it is, for the most part, exactly that. If only Drama had found a better home for ‘Gloria Mortis’, it wouldn’t be in such danger of being overlooked…